Sunday afternoon was another beautiful Tour da Arts on an equally beautiful Santa Monica summer day. For 5 years, the Santa Monica Museum of Art has been putting the culture in bike culture by tying together local artists and performers with the public using bikes as a fun, healthy and efficient way to move through in the city.  Since my first time attending, it’s always been one of my favorite Santa Monica events of the year, brining together the arts and community bicycling taking to the streets.

Hanging out around the booths setup to welcome guests before the ride start there were some familiar faces, organizations,  and businesses that had a presence at prior Tour da Arts events. The Bikerowave has helping tune up bikes, Santa Monica Spoke and C.I.C.L.E. (Cyclists Inciting Change thru Live Exchange) were tabling, and Metro Los Angeles was out with a bus for people to practice and familiarize themselves with bus bike racks. Planning staff from the city of Santa Monica showed off the latest draft of the pending Bergamot Area Plan while Peddler’s Creamery was out serving bike churned ice cream.

New this year that I don’t recall seeing before was a pedal powered smoothie blender (at one point repaired at the Bikerowave booth), and there was a significant electric assist bike presence from Pedego & IZIP, both of which have shops in Santa Monica. The whole e-bike thing is a trend to watch.

Sitting quietly under an umbrella amidst the bustle near the blender, was Jacqueline Suskin with her Poem Store (your subject, your price). She was recently featured in the Los Angeles Times, but at the event I had not previously heard of her work. Circulating around I kept coming back by the table. There was something unique and endearing about a writer sitting there punching out unique and personalized poems on little sheets of parchment paper in a manual type writer for any interested passers-by. Especially in our era of hyper communication, texting, and tweeting.

After watching several other people happily receiving their own poems, I finally had my own commissioned on the rather existential topic prompt of “the predicament of petroleum dependency for human civilization in the 21st century.” I was not interested in another love poem. She paused a beat and replied she’d “respond to it.” Her stream of consciousness take on it is hanging on my wall now.

The Santa Monica Museum Art itself is a big part of the pre-ride experience, and attendees are encouraged to check out the latest exhibits. The current main exhibit, I KILLED KENNY, features iconic works by Joyce Pensato that includes some large onsite murals for the SMMoA show. Newly installed from my last visit was dosa at SMMoA: Exploring Joshua Tree, an art installation and clothing selection for sale inspired by Joshua Tree National Park. It’s a great place to draw inspiration from, there is no landscape and ecological mix like it anywhere else. The tumble weed chandeliers were a nice touch. 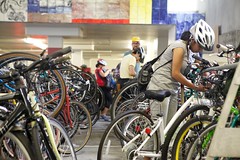 The first ride stop was a picture perfect illustration of the spatial efficiency of bikes. The organizers acquired permits for using 12 car parking spaces in public parking structure #9 (apparently one of the more expensive line items for putting on the event), to set up two rows of saddle mount racks , and parked what I heard from volunteers was roughly 250 bikes. To put that in perspective the entire garage fits 290 cars maximum, and we fit nearly that many bikes in a small fraction of one level.

The program for the day included two live dance performances. The first was an absolutely phenomenal contemporary tap dance troupe that rocked the house. Tap dance isn’t something I’ve experienced much previously, but the performances put together by Chloe & Maud Productions totally blew me away. The caliber of talent SMMoA lines up for Tour da Arts never ceases to amaze me. The Santa Monica Bay Women’s Club and stage was also perfectly suited to the performances, a little gem of a building I had largely overlooked until the Tour da Arts event last year had introduced me to the space.

The second live dance performance was across town at Grant Elementary School. The Heidi Duckler Dance Theatre preformed in, out of, and around an RV trailer, using the trailer itself as a prop and device for story telling. I started out looking at this setup in the first few moments a bit skeptically, but the creativity on display throughout, making the absolute most of their trailer as prop, and their site as a stage, was a treat. It’s hard to convey their style of performance in a few words, but if you missed it Sunday, they are definitely worth checking out, and they are known for site specific work.

Asuka Hisa, the SMMoA Director of Education, is the mastermind behind Tour da Arts, and who can be often found equally present at art openings and events promoting car-free & car-lite travel for the Los Angeles region. The performance talent that she finds and brings together for this event, especially one open to anyone, is really truly astounding.

After things settled down I chatted with Asuka about the origins of  Tour da Arts. She said she was always interested in SMMoA “being a museum program that goes beyond the museum walls”. Inspiration to make bikes a central part of the first Tour da Arts came in part from the social riding scene that was blossoming in L.A. at the time, and C.I.C.L.E.’s group rides touring Pasedena’s ArtNight. C.I.C.L.E. was  solicited to come on board to help coordinate the ride leading and route building , and have remained a staple presence of the event along with other volunteers helping wrangle traffic to keep things safe and relatively coordinated for a big ride on streets open to car traffic.

When I try to envision what Santa Monica could be more like in the future, a community of people of all ages that are comfortable riding bikes (and delightfully), talking to one another and appreciating the talent and culture in our city and regional neighbors, is certainly a component of what I’d love to see. Tour da Arts articulates a tangible window into that possibility every year. A big thanks to SMMoA, Asuka Hisa (and her small army of volunteers), ride leaders from C.I.C.L.E. and SM Spoke, the incredibly talented artists and performers, and the sponsors along with anyone else who helps make Tour da Arts happen.

Coming Up: Expanding Airport Park, May is Bike Month, and Handlebar...