(This article first appeared on The Healthy City Local. It is reprinted with the author’s permission. – DN)

I don’t know about in your neighborhood, but in Ocean Park two “little free libraries” have popped up. These are boxes with roofs that hold books — people are free to take them to read, or they can drop off their own books for others to read. 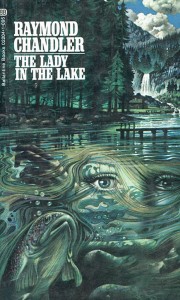 Last week on a stroll I looked in one of them and grabbed a copy of Raymond Chandler’s The Lady in the Lake, his 1943 mystery that takes place all over Southern California, from the mountains above San Bernardino to Bay City, Chandler’s stand-in for Santa Monica. (Not coincidentally, the book was a “Santa Monica Reads” selection in 2012.) It’s been too many decades since I’d read my Chandler, and I thought it was time to brush up.

Great read, and I was as much gripped by Chandler’s take on Bay City as I was with private eye Phillip Marlowe’s solving the mystery. There’s no question Chandler uses poetic license — for instance, Marlowe gets thrown into jail on thetwelfth floor of Bay City’s new city hall, but here’s what Marlowe says when he’s in that city hall:

It was a very nice city hall. Bay City was very nice place. People lived there and thought so. If I lived there, I would probably think so. I would see the nice blue bay and the cliffs and the yacht harbor and the quiet streets of houses, old houses brooding under old trees and new houses with sharp green lawns and wire fences and staked saplings set into the parkway in front of them. I knew a girl who lived on Twenty-fifth Street. It was a nice street. She was a nice girl. She liked Bay City.

She wouldn’t think about the Mexican and Negro slums stretched out on the dismal flats south of the old interurban tracks. Nor of the waterfront dives along the flat shore south of the cliffs, the sweaty little dancehalls on the pike, the marihuana joints, the narrow fox faces watching over the tops of newspapers in far too quiet hotel lobbies, nor the pickpockets and grifters and con men and drunk rollers and pimps and queens on the board walk.

Hey, when he’s talking about “the flat shore south of the cliffs,” that’s my Ocean Park — but Marlowe wouldn’t recognize it today. The City urban renewed the dives and the dancehalls off the map in the ’50s. (Chandler might get a smile from the Green Cross “marihuana” dispensaries across the line in Venice.)

I’m posting this because it makes me wonder once again — just when was it that Santa Monica was this “sleepy beach town” I keep hearing about? Certainly not when Marlowe was getting sapped on the head by the Bay City cops, which was also when the Douglas plant in Sunset Park was one of the biggest factories in the world, and I can’t think of any decade since when that description fits.

Or maybe even more significant, whatever Santa Monica was at any given time, whatever beach town characteristics it had or still has, I can’t think of any decade when it didn’t undergo significant change. It was never one, static thing.

I don’t know how many readers are among the 8,413 members of the “You know you are from Santa Monica if” page on Facebook, but I love the posts on it — people remembering what Santa Monica was like back then, whenever then was. What astonishes me, even as someone who has lived here 30 years, is how change happens all the time — yet you never quite perceive it. You can’t stick your hand in the same river.

Think of it — in the ’50s and ’60s came the big housing boom when thousands of apartments were built and Santa Monica reached its current population; the ’60s were when the freeway came in, and downtown Santa Monica declined, even after the City built parking structures and turned Third Street into a pedestrian mall; the ’70s were when, after Douglas Aircraft closed, Santa Monica’s economy began its move from manufacturing into offices, and office towers were built downtown; the ’80s were when new hotels were built, the Third Street Promenade opened, and single-family bungalows started selling to be torn down for mini-mansions; the ’90s were when the Promenade’s success remade downtown, and big office parks were built in the old industrial corridor.

Think about today, when the city continues to evolve. And, of course, the region around the city changes, too. And why not — as cities go, we’re young.

I can’t authoritatively say what form change should take, but I can authoritatively say that change will come because it has always done so, often in ways people don’t expect. One can’t argue against change by saying that there was ever an unchanging city.

(Note: We’re reaching out to authors of Santa Monica blogs to add to the voices present at Santa Monica Next. If you want to contribute, drop me a line, [email protected])