The fences have come down, and Tongva Park, which you may have seen growing to fruition while peaking behind the mesh, was been soft opened to the public this week, starting on Tuesday. The city will officially celebrate the park’s opening with a community celebration on October 19 from 11am to 4pm. It’s quite a transformation of space to have seen this parcel go from parking lot (with a curious proliferation of anti-pedestrian signs) to the lush pallet of plants and paths we have now. As well as opening up access to mature trees that were already here like the majestic Moreton Bay Fig tree known as “Morty” planted more than a hundred years ago. 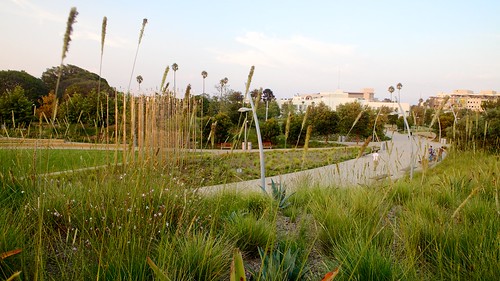 I already saw quite a few people strolling though, bumped into one of the architects on the project, as well as several people I knew checking out the new scene. On the second day of the park being opened I noticed some families had already caught word of the new playground space in the park and kids were making use of the new activities. I saw a few couples watching the sun set and a few make outs  (I certainly consider new make out spots a good sign for a park), and folks lounging around or strolling amidst the new greenery and shade. 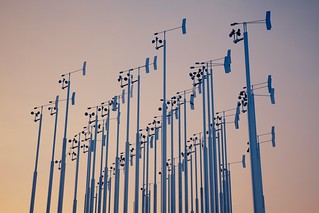 The new public art sculpture in the center of the park, “Weather Field No. 1” by Iñigo Manglano-Ovalle, is interesting to watch animating in person, as the rotating anemometers and wind vanes interact with the coastal breezes. The layered visual indication of the wind blowing at times shimmers in patterns subtly reminiscent of waves, creating an aesthetic that feels appropriately connected to it’s site. 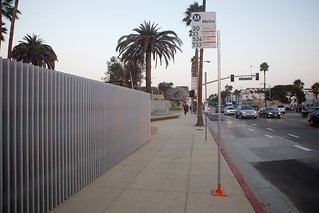 The true successes of a park is determined in time, and it’s ability to sustain activity of the people who enjoy and make use of it. There is however one initial detail in particular that stands out as bothersome to me, and that was a missed opportunity to do something nice for bus riders or provide seating at the curb position of the adjacent bus stop on Ocean Ave. The spot is constrained but there creative ways to do things for bus riders in narrow space. Overlooking opportunities to design features for the benefit of bus passengers is sadly typical everywhere, but should not be accepted. The city could always add a bus shelter at the site of it’s own, one does not exist currently, but it would been a nice touch to have some features for shade or seating for bus passengers that integrated with the feel of the park since the park aesthetic is carried across to the corner of Ocean and Colorado.

Check out the image gallery below for my complete photo set of images traveling through newly opened Tongva Park.

Bring the Kids for a Santa Monica Next/Streetsblog LA Playdate!