(James Rojas, the renowned urban planner who led the “Clover Park Creative Community Engagement Project” at last weekend’s Airport2Park picnic was nice enough to share his notes from the day with us. The notes have been gently edited. – DN)

The Santa Monica urban planning exercise was set up as a picnic to take advantage of the nice weather and nature. Red, white, and blue tarps were placed on the lawn and one tarp, like a buffet, was placed thousands of small every day objects such as hair rollers, buttons, plastic bottle tops (which could be found on simplyplastics.com), game pieces and much more that were provided to promote creative thinking.

The event consisted of two courses:

Course One asked each participant to individual build their favorite childhood memory.

Course Two placed the participants in teams and they collaborated to design/build a their ideal park.

The twelve participants had twenty minutes to self-reflect and build their favorite childhood memory by choosing from hundreds of small objects as an icebreaker.

They were given no constraints and were assured  that there were no right or wrong answers. The process began with no discussion, maps, or power point presentation because we wanted an untainted participant response. This lack of rules allowed them to think quickly, freely and take ownership of the process.

Once they started to seek, touch, and explore the materials in front of them, the creative process began. They began choosing pieces that they liked, or would help them reconstruct a memory, an experience or use. They began to gather pieces and placed them on the table.

Once they began to place and layout a few pieces of material on the construction paper, the design process began. Their hands began to move furiously as their designs and ideas became more developed and elaborate. Many participants got up many times to gather additional materials.  For the next ten minutes the participants were in a meditative state of thinking about how they experience and how to use the site.

After ten minutes the flurry of activity slowed down as people became satisfied with their models. They began to talk, look around at the others dioramas created by their colleagues, and pull out their cell phones to take pictures of their beautiful models.

I told the group to stop building!

The fun, and informative part of the exercise was about to begin when everyone would present their childhood memory to the group in one minute. They were asked to state their name, the place and activity of the memory.

The participants spoke with conviction and enthusiasm as they presented their memories.

It turns out many of the participants were from the United Kingdom while others were natives of Santa Monica. We heard great stories of far off places and local stories of places long gone.

The participants listened with great enthusiasm to each other’s stories and once they finished I synthesized it into the planning framework help understand how these memories are part of the planning process. Everyone had something to share and learned about each other.

Sharing these found memories brought the participants together because they exposed personal insights of their lives and they discovered that as children they had very similar experiences created by interactions with people, and the built and natural environment. The participant’s locations and activities illustrated intimate contact with nature from sitting under a tree or walking in the mud where the participants learned how to value and manipulate their own environment.

Many of the participants had ‘free range” childhoods where the roamed around and discover the wonders of nature from plants and animals.

Participants were able to personalize the planning process based on their experiences and imagination. This approach gave everyone access to the exercise. Through this process we begin to deeply understand each other and begin to create shared experiences.

Next the participants were placed in teams and were asked to create a park together. Participants pulled together their best ideas. Participants learn to comprise without restraints and built off each other. Once this task is complete each groups present their concepts to the group for review.

The two teams create unique parks they presented to each other.

Team One: Created an ideal part with numerous activities. (Description) 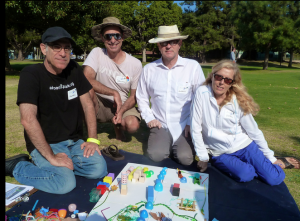 Team Two: Created a literal representation of the site. 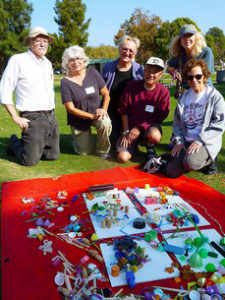 This simple, hands on method is an efficient, inexpensive way for people to communicate with each other through their ideas through play. People have an easier time building their ideal place rather than talking about it because cities and

Are inherently spatial. The workshops make it possible to engage this spatiality in rich and subtle ways that aren’t possible in other settings.  Photos, maps, video and computer models are excellent at capturing various aspects of urban space, but necessarily do so in an abstracted way. A model allows people to physically engage urban space in a direct way, with their bodies and hands, changing their viewpoint and posture, focusing and standing back, touching and changing things.

Unlike an architectural model, it is a site that people are invited into, to interact with the city and each other.  It is communal and provides a visual language that all kinds of people can participate in regardless of typical barriers such as language, age, ethnicity and professional training. As people participate the model changes. New ideas and opportunities emerge that weren’t visible at the beginning.  People are freed from the roles, biases and preconceptions they came with and are able to explore their ideas about the city together in a fluid way.