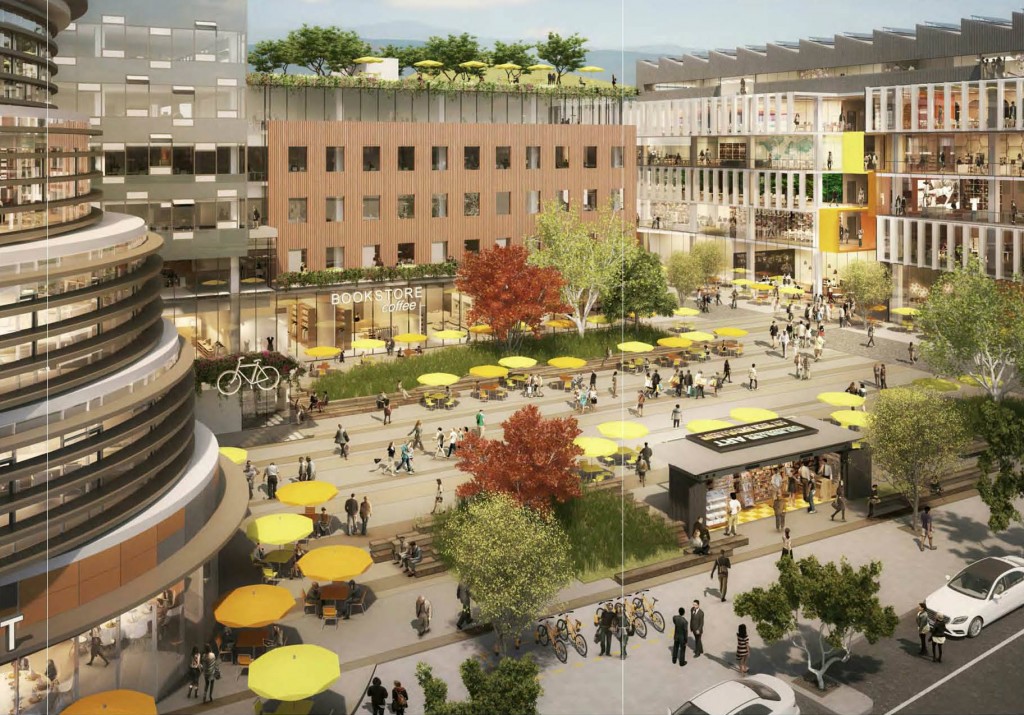 Next week, the Santa Monica City Council will vote on a first read of a 765,095 square-foot, $450 million, mixed-use project that, if built, will change the look and feel of the area around the future Bergamot Expo Line Station at 26th Street and Olympic Boulevard.

In short, this project is a “big deal,” says Richard McKinnon, Santa Monica planning commissioner. “It will impact Santa Monica for years to come.” The Planning Commission narrowly (four to three) approved the project, called the Bergamot Transit Village, in December after discussing it at five meetings.

The project, proposed by the Texas-based Hines developer, has been many years in the making. Hines purchased the site, a former Paper Mate manufacturing plant, in 2007 and has been working with the city on the development agreement ever since, said Varun Akula, the director working on the project at Hines. The plan has changed many times since then based on city input. It was downsized from a 957,000 square-foot project based on a recommendation from City Council in March 2011. Hines added more residential and took out some of the commercial space after publishing the Draft Environmental Impact Report, and redesigned four of the five buildings and open space at the request of the Planning Commission.

Currently, the project consists of five sites with one primary building at each site. Three of the five building sites will be residential, and two commercial, with community-serving retail throughout.

At its meeting on January 28 at 6:30 p.m., the City Council will have the opportunity to continue the project pending changes, approve it as proposed, or deny it. If approved, the City Council will still have to approve a second read on the ordinance and Hines will still have to obtain financing and approvals on the architecture and design and get a plan check before it can start construction, said Jing Yeo, city special projects manager.

Square-footage wise, as planned the project has just slightly more office space than housing space. In a city that has a considerable jobs-housing imbalance and resulting traffic congestion problems during rush hours (with 88,000 residents and 250,000 workers), the percentage of housing versus office space in this development is a big issue for city officials, community groups, and residents alike.

Circulation-wise, there are two new north-south streets, two new north-south pedestrian paths, one continuation of an east-west street, two new signalized intersections on Olympic Blvd., and around 2,000 subterranean parking spots planned for the development site. The EIR projects at full build in the year 2030 an additional 7,585 daily car trips, with 480 morning peak trips and 579 evening peak trips. And 29 of 97 intersections in the area would experience a “significant and unavoidable impact” as a result of the project.

To mitigate these effects, Hines proposes significant financial penalties for trips that exceed the evening trip cap in the EIR so it is supportive of the city’s long-term goal of no net new evening peak trips by 2030. Akula said it also proposes transit pass subsidies for residents, a parking cash-out program for employees, as well as a vanpool and bike share.

“This is the most aggressive transportation demand management program proposed in the City of Santa Monica,” Akula said.

Still, community groups like Santa Monicans for Renter’s Rights and Santa Monica Coalition for a Livable City both oppose the project because of its potential traffic impacts.

Santa Monicans for Renter’s Rights urge the council to exercise restraint on supporting any major developments that generate significant traffic until the community can adjust to the Expo Line.

“The proposed Hines development will clearly aggravate this already severe burden [of traffic]…” said Co-Chairs Patricia Hoffman and Richard Tahvildaran-Jesswein in a letter. “We do not believe that the benefits the Hines Development Agreement proposes are remotely sufficient to merit accepting this severe traffic burden. Nor do we have confidence that the measures intended to mitigate this traffic will be more than modestly effective or reliable over the long term.”

The Santa Monica Coalition for a Livable City cites similar issues with the plan, and claims that Hines failed to involve community members in the process.

“Hines made NO EFFORT to work with city groups to plan this project,” said Steering Committee members in a letter. “From the beginning, Hines has informed residents what it wants and what it intends to build. This is a terrible precedent for our city: i.e., a large developer dictating what it will build with no community input regarding the size and scale of the project.”

This site is included in the Bergamot Area Plan, which was created with significant community involvement and adopted by the City last fall. The area plan incorporates three years of “community preferences for land uses, circulation networks, infrastructure, parking strategies, open space, the arts, and design of buildings in the mixed-use, transit-oriented Bergamot area,” according to the Planning Department web site.

The question for City Council and Santa Monica residents is: does the Bergamot Transit Village fit in with the community’s wishes for the area?

The City Council Staff Report analyzes the plan’s compliance with policies, development standards, and design guidelines, as well as urban form, circulation, open space, and land use and concludes that it is consistent with the Bergamot Area Plan. Akula says the plan is in full compliance with the area plan—in fact, it is an integral part of it, providing pedestrian activity points and access to the site and a sidewalk along Olympic Blvd.

“Without this project it isn’t possible to implement [the Bergamot Area Plan],” Akula said. “This project provides the street grid.”

McKinnon thinks the project ultimately is not in line with community interests. He decided to vote against the village because he thinks the project should be downsized, include more housing, and be more architecturally interesting. He sees the proposed development becoming similar to the Water Garden office park, which is located across the street. It is active during business hours with restaurants and open space, but shuts down at night.