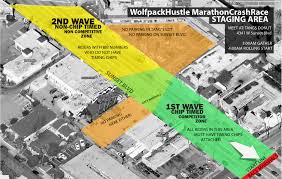 Every year, thousands of runners converge on Los Angeles to participate in one of the most widely attended marathons in America: The L.A. Marathon. In years past, there was an official cycling event that coincided with the marathon, but that event was discontinued several years ago. Yet that didn’t deter the thousands of cyclists who know that the marathon course offers a brief reprieve from L.A.’s day-to-day traffic. Forgoing the official route, a group known as the Wolfpack Hustle created what has become the world’s largest unsanctioned, non-permitted race: the Marathon Crash Race.

The same group that raced JetBlue during the 2011 Carmageddon (and won), the Wolfpack Hustle is a weekly bicycle ride that has been meeting every Monday night at Tang’s Donuts on Sunset & Fountain since 2005. Starting in 2010, they have also hosted the now-famous Marathon Crash Race. That event, attracting thousands of cyclists of all types, will take place this coming Sunday and culminates at Santa Monica’s own Palisades Park.

Who: All cyclists are welcome (with protection and lights, of course)! For those who intend on racing, there are four categories: Men’s Fixed, Men’s Geared, Women’s Fixed, Women’s Geared. (Note: registration is required.)

What: From the organizer’s website: “The Marathon Crash Race is a road race across Los Angeles from the East to the Beach. The course is the pre-dawn Marathon route – approximately 26 miles of LA streets. At 4AM, Marathon workers begin to barricade the streets and shortly after that is when this race takes place.”