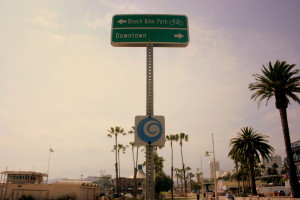 Santa Monica is on track to get funding from Metro for an open streets event, during which roads are shut to car traffic, to celebrate the Expo line coming to the bayside city, according to a Metro document.

The Metro Board of Directors will decide at its June meeting whether to allocate a $200,000 grant for Santa Monica’s event, along with funding for about a dozen other car-free festivals around the county recommended by Metro staff.

The full preliminary list, which can be seen on Streetsblog Los Angeles, includes CicLAvia events in Culver City, Long Beach (the city’s first true CicLAvia event, according to Longbeachize), the San Fernando Valley, and southeast Los Angeles. Update: Metro officials told Streetsblog that the final list “may differ from what was posted” and “will be released in early June.”

“We are fortunate to be recommended for funding, and look forward to a connection with Expo opening in Santa Monica, and working together with the local stakeholders to facilitate the event,” said Community and Strategic Planning Manager Francie Stefan.

Metro’s (rather blurry) map shows the tentative route for Santa Monica’s event, which is slated to coincide with the opening of Expo Phase II in spring or summer of 2016. The event would run along Colorado Avenue west of the Expo station at 4th and 5th streets in Downtown Santa Monica. Main Street would also be closed to car traffic south of Colorado Avenue to Navy Street (or so it seems).

Update: Stefan confirmed the tentative route in an email to Next.

“The event would be located on Colorado between the Expo Station and Pier (the Esplanade area) and south down Main Street through the Civic Center and into the business district.  It would connect to Third Street Promenade (through Santa Monica Place or along 2nd Street), Main Street, Tongva Park, the Pier, Marvin Braude Trail, Expo, etc,” Stefan wrote.

The routes, of course, are subject to changes, but with the Third Street Promenade and the Santa Monica Pier the two most prominent destinations visible from the Expo’s 4th Street terminus, the Expo Opens event could go a long way to remind people that Santa Monica’s thriving Main Street district, lined with shops, restaurants, and bars, is just a short walk (or bike ride) to the south.

“Programming has to be developed with partners, but in addition would highlight the easy connections to Expo, major recreational and commercial destinations, etc., and the comfort of actively walking and biking through these parts of Santa Monica,” Stefan wrote.

The east-west portion of Santa Monica’s “Expo Opens” event would take place at the future site of the Colorado Esplanade, an $11 million plan to widen sidewalks, add a cycle track and reduce car traffic to a single west-bound lane along Colorado Avenue west of the Expo light rail station.

According to the City’s website, the Esplanade, which will begin construction later this year, will be finished in 2015, ahead of Expo’s arrival.

Read more about the other events planned, and the ones that Metro staff didn’t recommend for funding, on Streetsblog Los Angeles.