Tomorrow night, designs for “The Plaza at Santa Monica” will be presented to the public at 7 pm in the Main Branch of the Santa Monica Library.

The project, designed by world-renowned architect Rem Koolhaas, would transform 2.5 acres of City-owned land between 4th and 5th streets south of Arizona Avenue — currently home to a surface parking lot, a couple banks, and a few storefronts — into a “cultural plaza,” complete with public open space, a boutique hotel, affordable housing and commercial office space.

The project could also change the skyline of Downtown Santa Monica.

And, of course, that’s part of the controversy. Among the many designs that Koolhass and his partners at OMA and Metropolitan Pacific Commercial Real Estate, there seem to be two finalists. One is capped at 85 feet, the maximum height for a building in Downtown Santa Monica without a waiver, and the other is ten feet higher.

The meeting comes two days after anti-development activists won a victory against the controversial Bergamot Transit Village. The City Council voted Tuesday to rescind its approval — instead of putting the project on the ballot — of the 765,000 square-foot mixed-use project planned for a five-acre lot across the street from a future Expo light rail stop.

With anti-development forces fresh off that victory and the question of building height a hot topic in Santa Monica, it remains to be seen if they will turn their eyes to the Koolhaas proposal.

Koolhass is often referred to as the “prophet of modern architecture” for designs that are iconic, aesthetically pleasing and functional. The 2000 winner of the Pritzker Prize, think of it as the Olympic Gold Medal of architecture, Koolhass is both one of the world’s most decorated architects and one of the most discussed. A recent article in Smithsonian Magazine labeled him “the most controversial architect in the world.”

The City Council tapped Koolhaas and his partners — one of three teams competing to develop the prime piece of Downtown Santa Monica real estate — for the project back in December after a lengthy public process that started in 2011 to determine what uses best fit on the City-owned parcel.

The challenge with this project is how do you bring the Koolhass brand to a small city such as Santa Monica and have it blend with the local infrastructure and not dominate it.

In truth, there is no different in the square footage available for hotel, affordable housing or commercial development in the two designs. The main difference between the two is that the shorter design is wider, reducing the amount of open space and casting shadows over the open space that remains.

Both designs also make room for the seasonal ice skating rink that Downtown Santa Monica opens up on 5th and Arizona for the city’s Winterlit Festival. The design also includes park space on the bottom floor and even a community space on the second floor with a band stand. Bike parking, space for a future bike share station, and a bike room are all part of both plans as well.

So in the end the city will be faced with a choice over holding firm to its height limit or choose a more iconic design in the “Koolhass style” that has the added benefit of more and better open space.

More information on the hearing can be found on the poster below. 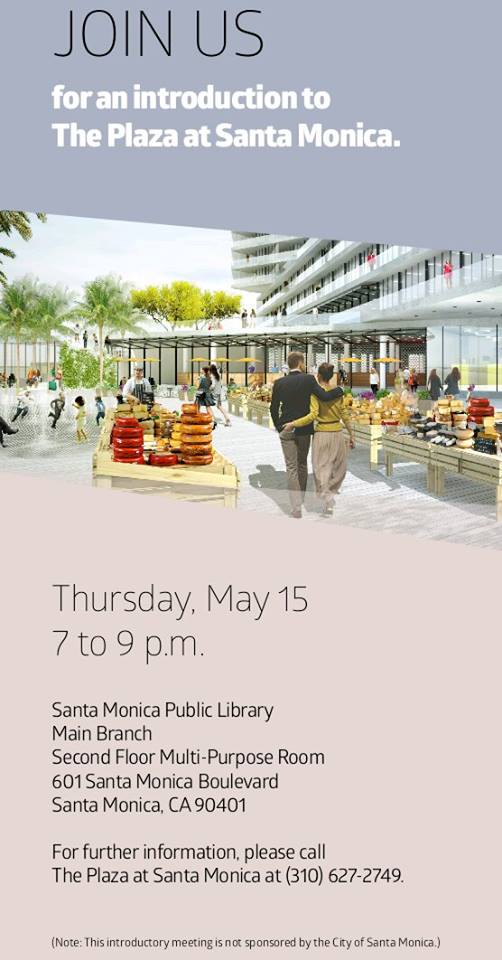 Coming Up: Council Considers Koolhaas Project, Join Us in Planning the...

Iconic Plaza at Santa Monica Project Up for Review at Planning...