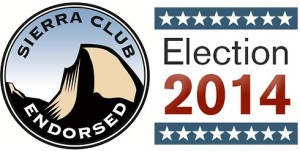 Sometimes, up is down in Westside politics and when it comes to environmental policy, that seems to be all too true this year.

While the Sierra Club has a general policy position in support of urban infill development as a means of combating greenhouse gas emissions and suburban sprawl, it also cites anti-development positions as the key position in determining its endorsements for Santa Monica City Council.

In a statement posted to the West L.A. Sierra Club website, the organization claimed that its three candidates were chosen in part because they supported closing or reducing jet traffic out of Santa Monica Airport — a position all but two of the 14 candidates running for Council hold. The release also lauded Council candidate and Planning Commissioner Richard McKinnon, one of Club’s endorsed candidates and long-time bike advocate, for his talk of turning Santa Monica a “deep green.”

The statement also said the Club supported the three candidates because they would “slow down the overdevelopment that has contributeding [sic] to the choking of westside traffic, severely altered the quality of life in Santa Monica and threatens to bring high-rise structures to the city’s shoreline.”

But that’s at odds with the regional, state, and national chapter’s positions on “smart growth.” And it contradicts state environmental policy.

“Auto delay is no longer considered an environmental impact in California,” said Mott Smith, principal at Civic Enterprise Development and Council of Infill Builders board member. Smith was referring to SB 743, which passed in September 2013 thanks to the lobbying efforts of the Natural Resource Defense Council (NRDC), the state branch of the Sierra Club, and other environmental organizations.

The bill removed Level of Service (LOS, a measure of car traffic congestion) from the list of tools that must be used to analyze environmental impacts of a project under the California Environmental Quality Act (CEQA).

“The problem is, when your field of vision is as wide as the block you live in, it’s very easy to conflate your own desire to preserve your neighborhood in amber with a general moral position of trying to protect the state. And they are not the same thing,” Smith said.

“Because sprawl has been traditionally so easy to do, when middle-class development hits a buzz–saw on the coast, it’s been relatively easy to pick up that housing demand in places like the Inland Empire,” he said. “The problem with the sprawl solution to land use management, which is basically what we’ve had for the last 50 years, is that it turns out not just to be environmentally unsustainable but economically unsustainable, as well.”

He’s right, according to the Sierra Club. In a post on the Angeles Chapter of the Sierra Club’s website called, “L.A. proposal to increase affordable housing stirs questions about growth,” author Beth Steckler with Move LA defines “smart growth”:

The smart growth alternative calls for building on vacant land, obsolete industrial land or distressed commercial areas closer to where the jobs and public transportation are. Such an ‘infill’ approach saves taxpayers the costs of expensive freeway construction, makes public transportation an efficient and workable option for more people, preserves open space, and at least doesn’t aggravate our air quality. It sounds logical, but in practice infill developers often face stiff neighborhood opposition, particularly to increased density-which many residents believe will exacerbate traffic and harm their community… From every perspective-economic, social, and environmental-the answer is clear. Creating denser, mixed-use communities with good public transportation is a smarter way to build more affordable homes and apartments for our growing population.

In 2010, Santa Monica adopted its award-winning Land Use and Circulation Element, which attempted to balance the need to accommodate regional population growth by emphasizing urban mixed-use infill at former industrial or underdeveloped sites while preventing any increase in intensity in non-transit-oriented neighborhoods. Still, all three candidates endorsed by the regional chapter, including incumbent Councilmember Kevin McKeown, have been vocal opponents of development in Santa Monica, arguing against higher density and taller buildings, even near transit.

The three endorsed candidates have most recently attacked and helped defeat a plan to replace a vacant factory with housing and office space across the street from the future 26th Street Expo light rail station. The station is expected to start operating early in 2016.

“We asked numerous questions and completed an extremely thorough endorsement process. There were many factors we considered when endorsing these candidates,” Hanscom said of the endorsement, made by a seven-member committee. “Our endorsed candidates, we believe, will be the absolute best for the environment and environmental protections as leaders on the Santa Monica City Council.”

Hanscom, who lives out of the city and commutes in for appointments, also noted in a telephone conversation that traffic has made it difficult to drive to Santa Monica, where she said her optometrist is located.

In an email she wrote, “The Earth has limits.  Water, clean air, & protection of nature are being stressed by too much human development.  We need some smaller footprints.  Fossil fuel emissions from each and every building demolition, along with impacts from materials production and construction for each new development all have impacts on our Earth.”

She also said that the endorsements reflect the position of the entire organization, not just the local chapter.

In a presentation by then-chair of the Sierra Club’s Transportation Committee, John Holtzclaw, he outlines the environmentalist organization’s program for combating sprawl:

Echoing the Sierra Club, Smith notes that if California is going to fight sprawl, urban infill development is the way to do it.

“There are not an infinite number of opportunities to build walkable communities. We really have to take advantage of the opportunities that are there,” Smith said.

“We’ve been able to talk out of both sides of our mouths for the past 50 years about maintaining our neighborhoods exactly as we remember them and being environmentalists,” he said. “I think we’ve hit the point in our state’s history where we can no longer say both things with a straight face.”

Sierra Club California has been a strong and constant advocate for reducing our dependence on fossil fuels to cut air pollution, including climate-disrupting greenhouse gases. Since 1986, we have supported and pushed legislation that successfully helped reduce pollution around the state, including the landmark AB 32 Global Warming Solutions Act. We have also actively defended air cleanup regulations from attack by polluters, including fossil fuel companies invested in the status quo.

And this is from the Angeles Chapter of the Sierra Club, which represents Orange and Los Angeles counties: “We are working to stop poorly planned commercial and residential development that is chipping away at critical native habitats and outdoor recreation areas.”

As for height, Smith says, “There are much more important things we need to worry about than whether the building is tall.” Getting people to use their cars less takes a combination of things, like locating new construction within walking distance of the services people need. It also means building less parking, Smith said.

By not building new housing and workplaces, however, Santa Monica is forcing people to live further and further on the periphery.

“If the demand for dense housing in Santa Monica is successfully satisfied with sprawl housing in inland areas, then we’ve made the state a worse place, not a better place,” Smith said.