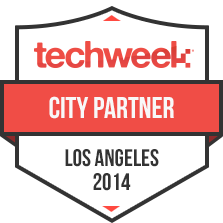 Techweek Los Angeles returns to Silicon Beach this week, pitching its tent on the Santa Monica Pier for a week-long celebration of the region’s burgeoning tech industry.

With about 40 percent of Los Angeles’ start up tech businesses based in Santa Monica, it’s no surprise that Techweek, which originally started in Chicago in 2011, would choose the bayside city as the location for its Los Angeles conference.

“Techweek celebrates innovation in emerging tech hubs across America,” according to Techweek’s website. “From our first event in Chicago we have grown to cover 5 great cities and will continue to bring our celebration to many more centers of innovation across the U.S. and beyond.”

Techweek first came to Santa Monica in 2013 and on Monday, Techweek Los Angeles kicked off its 2014 seven-day program, which is designed to bring “local community together and we then shine a large global spotlight on the exciting developments in that community.”

We will also be hosting a happy hour on Friday at 5:30 p.m. at Copa d’Oro in Downtown Santa Monica. All Techweek attendees are welcome.

One of the main reasons Santa Monica is at the epicenter of the Los Angeles region’s tech boom is that the City government has been on the cutting edge of providing locally-controlled, high-speed Internet to local businesses since the early 21st century.

Santa Monica’s efforts mean the City offer start ups and other businesses access to competitively-priced Internet that is actually faster than what is offered by national carriers.

Santa Monica is helping to export that model to other cities through its Next Century Cities initiative and could soon offer City Internet to residents throughout Santa Monica.

As a result, Santa Monica has seen tech entrepreneurship boom over the last 15 years. Cross Campus, a local coworking space, started in Santa Monica and will soon expand to Pasadena and Downtown Los Angeles.

At a meeting at Cross Campus in September, Santa Monica Chamber of Commerce President Laurel Rosen told the crowd, composed mostly of people in their 20s and 30s, “We want you to be the future leaders of our community.”

“We need you to be a part of the community,” she said. “Help us shape the future.”