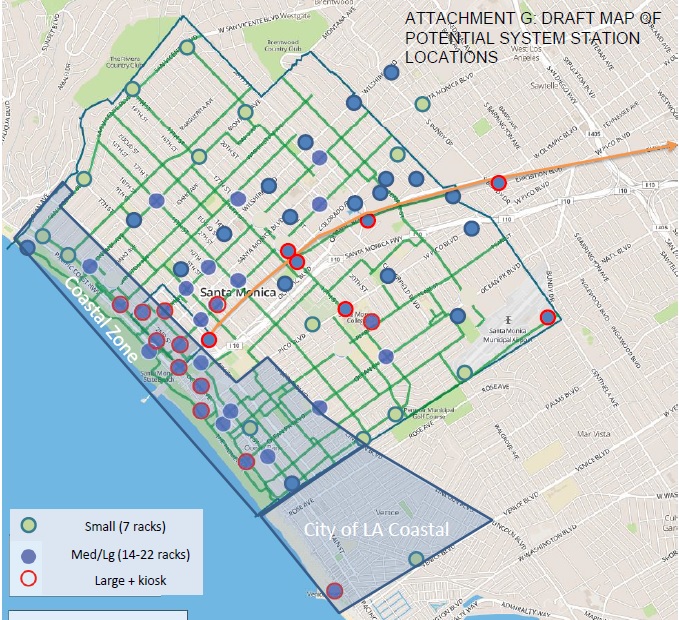 Last week, the Santa Monica City Council unanimously approved what could be the County’s first public bike share program. The Council tapped CycleHop, LLC to operate the 500-bike system with about 65 to 75 stations.

But approving the contract was just the beginning. Now, the City wants to hear where you think the bike share hubs should be located throughout Santa Monica.

“With Council’s approval of a new Bikeshare system on November 11, 2014, the City is moving full speed ahead with CycleHop toward next year’s anticipated grand opening,” according to the City’s website. “We need your help to suggest hub locations that will serve every resident who will use the system to commute, do errands, or substitute a bikeshare bike for any trip they would otherwise make by car.”

It’s very simple. From your computer, you can do it at http://www.santamonicabikeshare.com/. You can also download the Social Cycle app for your phone.

The site shows you where hubs have been suggested and how popular they are with others. Once you sing in, you can vote on whether you like hub locations that others have suggested or you can suggest your own.

At last Tuesday’s City Council meeting, there was some concern that the bike share hubs would be sited in places convenient to visitors at the expense of siting hubs in less dense neighborhoods.

Staff said that while the Council may have approved the contract, there would still be plenty of outreach to determine where best to put the hubs. So, Santa Monica, now’s your chance to chime in.