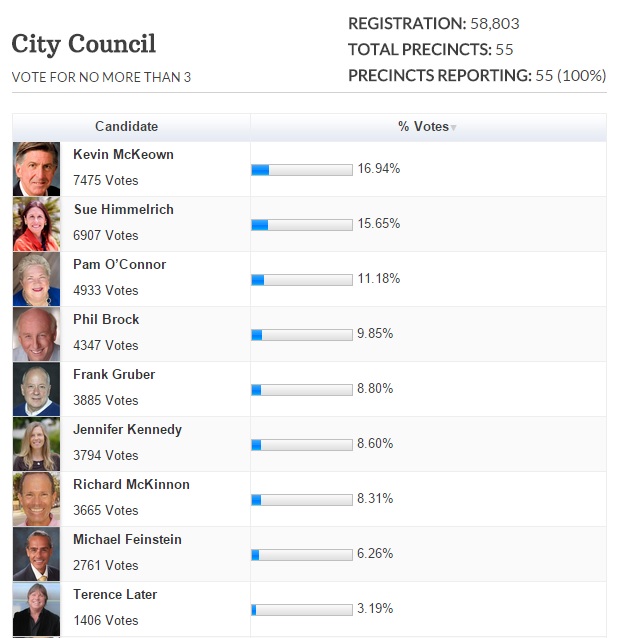 The results came in about 3 a.m. this morning and Santa Monica officially has a new City Council.

Pam O’Connor was reelected, as was her colleague Kevin McKeown. They will be joined on the dais by newcomer Sue Himmelrich.

You can see all the results here.

It was certainly a night of mixed results. The city spoke clearly on its views on the two airport related ballot measures.

That victory came in spite of nearly $1 million spent by pro-aviation groups to campaign for Measure D and against LC, which they (falsely) claimed would lead to massive overdevelopment at the airport.

In reality, LC prohibits the City Council from approving anything but a park on the 227-acre parcel of airport land without a popular vote while maintaining the Council’s discretion to take begin taking steps to close to all or part of the airport next year.

On the other side, however, voters rejected two companion bond measures that would have provided a local funding source for affordable housing production and retention. Measure H, which would have raised the property transfer tax levied by the City on all property transactions over a $1 million from $3 per $1000 to $9 per $1000 of assessed value, failed. About 58 percent voted against it.

Its companion measure, Measure HH, which earmarked the money raised by Measure H for permanent low-cost housing, actually passed with 50.1 percent voting in favor of it. However, without Measure H, there are no funds to earmark.

A rent control measure, Measure FS, narrowly squeaked by with a little more than 51 percent of the vote, surprising in a town dominated by pro-renter politics. FS raises the annual fee land owners have to pay to the Rent Board to register their units and limits the amount of that fee that they can pass through to tenants.

It was a close race between Sheila Kuehl and Bobby Shriver to sit to replace 3rd District County Supervisor Zev Yaroslavsky, though Kuehl triumphed in the end with about 53 percent of the vote.

Since the all five member of the L.A. County Board of Supervisors sit on the Metro Board of Directors, we did interviews with Bobby and Sheila — both Santa Monica residents — leading up to the election in which we talked about shared streets and Measure R2, among other things.

Gruber: Circumstances, or how SMRR came to endorse Sue Himmelrich and...