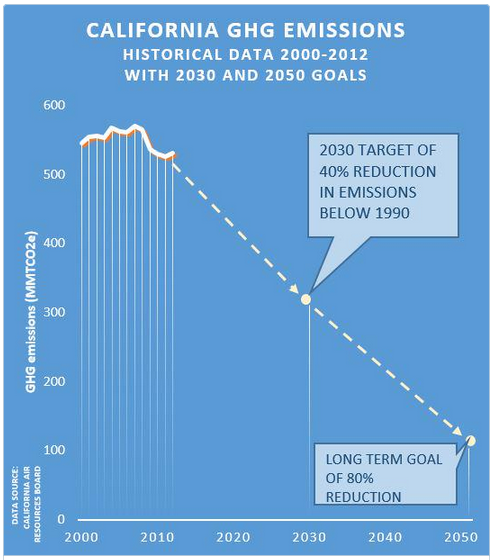 [pullquote align=left]
“I am concerned that Santa Monica leaders are wavering on this commitment. For example, the City appears to be poised to back down from its promise to build new housing near transit.” – Assemblymember Richard Bloom
[/pullquote]Governor Jerry Brown issued an executive order Wednesday calling for more ambitious targets for reducing greenhouse gas (GHG) emissions statewide.

The order was meant as a way to push California closer to achieving the 80 percent cut in greenhouse gas reductions by 2050, compared with 1990, required by a 2006 state law. Under Brown’s order, the state would have to get halfway there — a 40 percent reduction — by 2030. As California Streetsblog reporter Melanie Curry notes, it is an ambitious target, but there is no specific plan to get there. We know what the main culprit for GHG emissions in California is, however: transportation.

With that in mind, Santa Monica Next asked the bayside city’s local and state representatives what the executive order means for Santa Monica.

“I applaud the Governor for his foresight in setting an ambitious and important goal for 2030. It is worth noting, however, that we are aligning ourselves with 30 countries that have already taken this step. Santa Monica, like California, has traditionally been looked to for leadership across the globe on a range of issues. California is stepping up its effort and I will work on achieving this goal through policy changes and budget leadership in my role as the Natural Resources and Transportation Subcommittee Chair.

“Santa Monica, along with other local governments, can help by redoubling efforts on greenhouse gas reductions. However, I am concerned that Santa Monica leaders are wavering on this commitment. For example, the City appears to be poised to back down from its promise to build new housing near transit. Now that the completion of Expo is within sight, Santa Monica should look to other opportunities to create alternatives to automobile travel in our sub-region. To accomplish this, we should be enhancing bus, bike and pedestrian access. We should also innovate by planning and locally funding streetcar lines that can help relieve travel time on key routes, much in the way Portland and Seattle have done.”

“Through its Sustainable City program, Santa Monica already is leading the way in reducing greenhouse gas emissions (GHG) and shrinking its ecological footprint.  In many ways, Santa Monica is a model for other communities and the state. The governor’s new GHG targets are an exciting challenge, and the state Senate has proposed a climate change agenda that goes even further than what the governor proposed. Our legislation sets a goal of reducing petroleum use by 50%, having 50% of our energy come from renewable sources, and increasing energy efficiency in buildings by 50% — all by 2030. In order to meet these goals Santa Monica should keep doing what it is doing, but more of it.”

“As with water conservation, historic leader Santa Monica finds itself caught up with by our visionary Governor and statewide awareness. On greenhouse gases as with water, the expertise and commitment already demonstrated in Santa Monica policy and practice position us to meet new challenges.”

“These aggressive targets are necessary if we are going to reduce the disastrous impacts of climate change. Santa Monica can do its part by creating a walkable, bikeable, multi-modal city where people have options other than driving alone to get to work, shopping, and social activities. This means building housing near all types of transit, improving our bike, pedestrian, and transit infrastructure, and each of us looking for ways to reduce our vehicle miles traveled and overall carbon footprint.”

“I applaud the Governor’s initiative on this critical issue. California has historically been a trend setter on environmental strategies such as auto fuel efficiency and energy efficiency in buildings, adopting standards that then push other states and the Federal government into similar actions.

“Certainly the Governor’s new targets raise the bar for Santa Monica as well, as our current target is a 30% reduction by 2030 from the 1990 GHG emissions benchmark. Fortunately, we appear to be on track to reach our goal of a 15% reduction by the end of this year despite an uptick in GHG emissions in recent years due to population growth and increased economic activity. Going forward we still have a lot of arrows in our quiver, including focusing new development around the Expo line, adding bike share and car share as mobility options, adopting local standards which exceed the state’s green building code, adoption of a zero waste strategy and installation of more local renewable energy sources.”