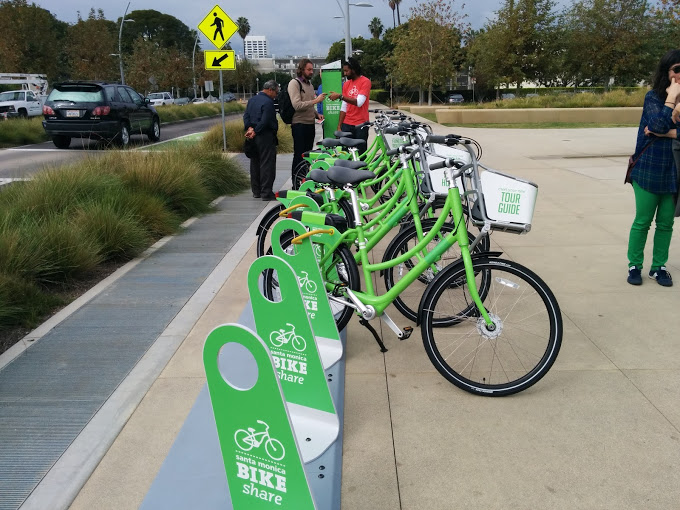 As expected, at yesterday’s meeting the Metro Planning and Programming Committee approved the contract for the first phase of Metro bike share. The final approval is now expected at next Thursday’s meeting of the full Metro board of directors.

The initial phase of Metro bike-share will be located in downtown Los Angeles, extending from Union Station to USC. There will be 1,000+ bicycles at 60+ docking stations. The system is expected to open in early 2016. Once established, the system is expected to expand to Pasadena, other parts of central Los Angeles, and additional areas. See details at this earlier SBLA article.

Metro bike share will likely be the largest, but when it opens for business in early 2016, it will be the third bike share system in L.A. County, after the systems already being implemented in the cities of Santa Monica and Long Beach. Both Santa Monica and Long Beach use a different operator, CycleHop, than the one being approved by Metro. At yesterday’s Metro meeting, the city of Santa Monica’s Strategic and Transportation Planning Manager Francie Stefan testified that multiple uncoordinated systems could “chill” the spread of bike-share throughout the region.

“The common thread that ties together virtually all bikeshare systems is full interoperability from station-to-station regardless of jurisdictional boundaries: a seamless customer services,” wrote Bloom, who has been an advocate for regional bike-share since he served on the Santa Monica City Council. “That concept was built into the Santa Monica RFP [Request for Proposal] process by including input from multiple jurisdictions, including all members of the Westside Council of Governments (Santa Monica, West Hollywood, Beverly Hills, Culver City, and Los Angeles), L.A. Metro, County of Los Angeles and bicycle advocates.”

Bloom also noted that Santa Monica, whose pilot bike-share program will launch sometime this summer, took the lead on bike-share for the region because it was the only city that had, at the time, secured funding, a $2 million grant. The city received an extension on the grant in 2013, but stood to lose the money if it didn’t move forward with bike-share. Santa Monica’s full system is expected to roll out in November with 500 bikes.

“It was in this context that Metro issued its RFP,” Bloom wrote. “It is my understanding that Metro’s RFP did not consider interoperability as a key criteria. As a result, it appears none of the three finalists match the technology that Santa Monica has adopted. Moreover, Long Beach has also adopted Santa Monica’s vendor and Beverly Hills, West Hollywood and UCLA are poised to do the same.”

Metro boardmembers, including L.A. City Councilmember Mike Bonin, County Supervisor Sheila Kuehl, and Lakewood City Councilmember Diane DuBois all expressed concerns over future interoperability between multiple systems, but ultimately this concern was outweighed by the utility of getting bikes on the ground. The committee unanimously approved moving forward now with the downtown L.A. pilot, and later reporting back with plans on how and when multiple systems can be linked.

Angelenos may need use a valid credit card as the interoperability when these systems are initially implemented.