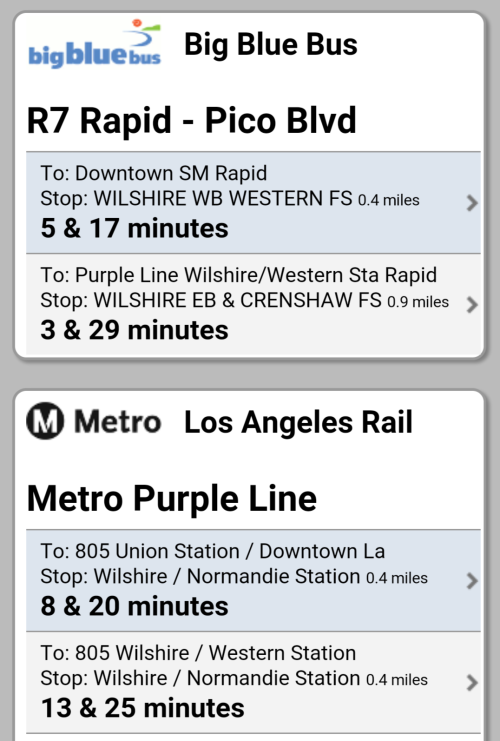 “We at Big Blue Bus are very excited to launch this customer serving tool. It is one that customers have specifically asked for, expressing the value of being able to plan their day around real-time information,” said Big Blue Bus Government and Community Relations Manager Suja Lowenthal.

NextBus is the most recent real-time transit info service to add Big Blue Bus data, which was opened to the public early in June. One of the first was Google Maps, followed by Transit App, Citymapper, and Moovit.

“Trip planning combined with real-time bus arrival information is powerful tool allowing customers to take charge of their own time and not be restrained by the uncertainty that not knowing when a bus will arrive can create,” she said.

Kevin Hobson, a web developer for the city, led “Hack the Beach” event in June at which BBB’s GTFS data was made available.

“I’m hoping that this example program will make BBB’s real-time data accessible to more developers,” Hobson told Next last month when the live system map launched. “The program was written to show how different pieces of GTFS data, such as routes, trips, and vehicle positions, are used together.”

NextBus has real-time info for about 135 transit systems around the world, ranging in size from two buses to thousands, including Metro and Santa Monica.

Prioritizing The Experience And Timeliness Of Local Transit