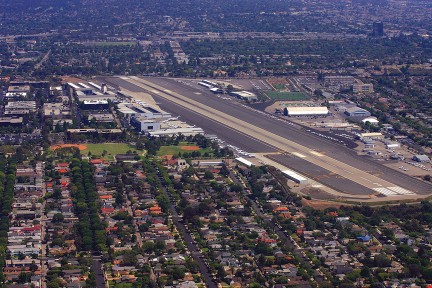 Opponents of Santa Monica Airport are celebrating today after a 30-year agreement between the city and the Federal Aviation Administration expired last night at midnight, which they hope will mean the conversion of about 12 acres not currently used for aviation into park land.

The 1984 agreement with the FAA that required Santa Monica maintain the city-owned land as an airport at least until July 1, 2015 officially and activist organizations like Airport2Park, which formed to advocate for the conversion of the airport into a park, consider this to be the first step toward achieving full closure of the century-old, 227-acre airport.

“While by all rights the City should be able to close the airport tomorrow, July 1, administrative proceedings and the course of the City’s litigation to establish its right are holding up that inevitable eventuality,” Frank Gruber, a local resident who is active in Airport2Park, wrote in his blog Tuesday.

“However, the 1984 Agreement contained provisions (namely requirements to provide aircraft tie-downs) that unquestionably expire today and the expiration of those requirements frees up for City use about 12 acres of land south of the runway and north of Airport Avenue (in two parcels more or less straddling the existing Airport Park),” he wrote.

“There will be a barbeque and games for the entire family,” Airport2Park Foundation President Neil Carrey said in a release.

“We’d like everyone who wants to see the asphalt turned into green space to come along, and we hope all the members of the City Council who helped make this possible will join us too. We’re looking to see the planes removed and work begun on the park as soon as possible,” he said.

The end of the 1984 agreement is one of several milestones in the decades-old battle over the future of Santa Monica Airport. Last election season, voters solidly rejected Measure D, a ballot initiative supported by aviation interests that would have tied the city’s hands in all future changes to airport land by requiring a popular vote regardless of the change. Instead, voters approved Measure LC, a counter measure that retained the City Council’s authority to make decisions about future uses of the airport land so long as those uses were for parks and public recreation facilities.

Still, there is likely a long and uphill battle ahead for those hoping to close the airport, as noted by Gruber above. City Attorney Marsha Moutrie, at a Council meeting last August, said, “This is not a situation where the federal government will easily let go of its hold on this land; and anyone who thinks that–and I say this with respect–is naive.”

She added that the status of the airport “will take years to sort out.”