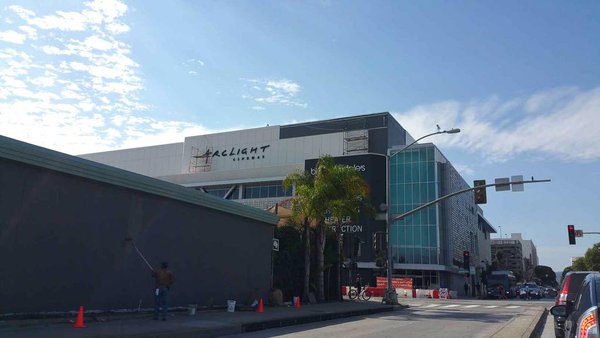 Like with all other ArcLight theaters, the new Santa Monica location offers a luxury movie-going experience, complete with reserved seating, a full bar, a full menu, and cafe lounge. In addition to showing the latest blockbusters, ArcLight Santa Monica will also host the ArcLight presents series, which will allow viewers to see classic movies like 2001: A Space Odyssey and Die Hard on the big screen.

The 12-screen theater is also less than a block from the future Downtown Santa Monica Expo light rail station. In fact, movie-goers can get a bird’s-eye-view of the station as construction finishes up.

Next year, it’ll get even easier to leave your car at home and head to Downtown Santa Monica for an evening of excellent food, speciality drinks, and quality entertainment. Who wants to worry about parking or whether you should have that second cocktail because you have to drive home?

L.A. Eater reports that Downtown Santa Monica has got a new place to grab a bite to eat: “Taking over the prime spot vacated by Rockenwagner Bakery nearby the Third Street Promenade, Lemonade began service two days ago in Santa Monica. The friendly all-day cafeteria-style eatery was originally slated to open in spring,” according to LA Eater.

Mendocino Farms also officially opened this week. The gourmet sandwich shop — located at Wilshire and 7th Street — opened its doors on November 17. While you can get all the great sandwiches and sides offered at other locations, the Santa Monica location is still waiting on permits to allow them to serve beer and wine.

SMC Has A New President

On Tuesday, November 17, the Santa Monica College Board of Trustees named the educational institution’s new president. The Board tapped Kathryn E. Jeffery, PhD, the current president of Pasadena City College, to take the helm at SMC.

“We are absolutely thrilled that Dr. Jeffery accepted our offer to be Santa Monica College’s new president,” Rob Rader, chair of the SMC Board of Trustees, said in an official statement issued Wednesday.

“She is a passionate, creative and inspirational leader – one who has proven over her prolific career to be a true advocate for students. Her leadership will take SMC to new pinnacles of excellence, as we continue to provide the highest quality of education possible for all of our students. I am proud to welcome her to the SMC family,” he said.

According to SMC officials, Jeffery served as President of Hennepin Technical College in Minnesota; Provost/Chief Campus Administrator at the College of Southern Nevada in Las Vegas; Vice President of Columbia College in the Yosemite Community College District; and as Dean for Faculty and Staff Diversity/Development and Dean for Student Services at the California Community Colleges Chancellor’s Office.

Have you been noticing more bikes around town? Better bike lanes? You’re not imagining things. Santa Monica is undergoing a transportation revolution, moving toward a multi-modal model that is both healthy for the individual and more sustainable for the community as a whole.

But it was no accident. It’s partly due to Santa Monica’s award-winning Bike Action Plan, adopted unanimously by the city council in November 2011. This Saturday, Santa Monica Spoke — our local chapter of the LA County Bicycle Coalition — will be celebrating the birthday of this vital piece of Santa Monica’s sustainable future. Learn what has been accomplished and what more is in store. For more information, visit smspoke.org.

It’s Time to Gear Up! for Bike Month, Santa Monica