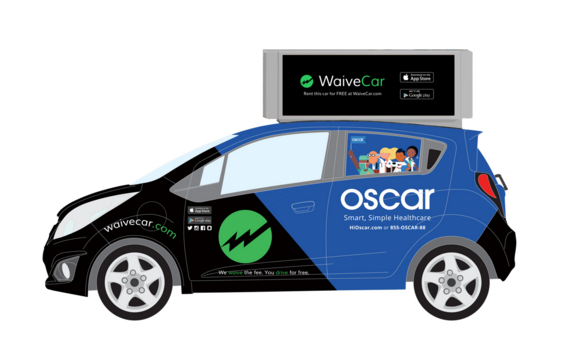 WaiveCar, an ad-supported car-share service, launched in Santa Monica and Venice this week with an all-electric fleet of 20 vehicles available to users for free.

The free car-share service is supported by ads companies take out on the cars themselves, according to WaiveCar’s website. “WaiveCar rides are free because the cars work as mobile billboards. You’re actually paying us just by driving the cars,” the site reads.

WaiveCar works with a smart-phone based app, which allows users to locate and reserve a car. While the ads cover the cost to the driver for the first two hours, each additional hour costs $5.99, according to the site.

According to L.A. Biz, “The fleet will be dispersed throughout Santa Monica and Venice Beach, near highly trafficked areas such as the 3rd Street Promenade, Santa Monica Place, the Santa Monica Pier and Muscle Beach.” L.A. Biz also reports that this is the beginning of the startups plans to expand throughout the Los Angeles region with a fleet of 200 cars.

The announcement comes shortly after the Santa Monica City Council agreed to enter into a deal with Zipcar, another car-sharing service, to increase the number of cars that company has in Santa Monica. The agreement will allow some of Zipcar’s vehicles to be parked in city-owned parking spaces.

Car-share, like bike-share, allows members to reserve and access vehicles on demand. With most companies, users are charged an hourly fee, which includes gas and insurance, or they can pay by the day. In the case of Zipcar, car-share can also give users access to a wider range of vehicle types. You may own a smart car, for example, but on rare occasion need a larger-capacity vehicle to transport something or more passengers, which you can access with car-share.

The presence of car-share companies is an important component of Santa Monica’s new mobility initiative, which is geared toward offering people who live, work, and visit Santa Monica alternatives to driving their own vehicles around town. The recent launch of L.A. County’s first-ever bike-share program as well as the coming of the Expo light rail line are also major changes to the city’s mobility options.

Studies have shown that car-share availability can reduce vehicle ownership and increase fuel efficiency, since the vehicles in car-share fleets tend to be more efficient than most privately-owned cars, which is definitely the case for WaiveCar’s fleet of 20 all-electric vehicles.

WaiveCar, unlike Zipcar, appears to offer only one type of vehicle: a four-door Chevy Spark.

Have any of our readers tried the new service? Let us know what you think.