This article was originally published on The Healthy City Local.

I’ve been mulling over an article I read in the Daily Press a couple of weeks ago. The article was about how the owner of Cars with Class, the classic car dealership in a storefront in the 1100 block of Wilshire, feared that he would have to close his business because the property had sold for $16 million, and he expected his rent would be raised to beyond what he could afford.

There are quite a few businesses I frequent near Cars with Class and I have often walked by and admired the merchandise—beautiful cars. If Grant Woods, the owner, does lose his lease, I’ll be sorry—not only for him, but also because Santa Monica will lose an interesting storefront.

To be honest, though, it’s not worrying about Cars with Class that has kept me thinking about the article. Instead, there is a quote from Mr. Woods at the end of the piece that I found curious. Speaking to the reporter, Mr. Woods connects the possibility of losing his lease to the recent closure of another store in the area, J & T European Gourmet Food. J & T was famous for its Polish sausages and other meats and imported foods, and I often was a customer. I heartily agree with something Mr. Woods said, namely that “there are going to be a lot of people who miss it.”

But then Mr. Woods said something that was, as I said, curious. He said, “That’s the changing demographics we face.”

Changing demographics. Hmmm. What I found curious was, does anyone believe that the demographics of the customers at Cars with Class were the same as those of the customers of J & T? I’ve been in J & T a lot, and I don’t recall too many customers who looked like they were going to cross the street to buy a vintage Corvette or Jaguar.

But Mr. Woods’ explanation for why J & T moved and why he might have to move—“changing demographics”—exemplified a typical reaction these days to change no matter how routine. Maybe this has always been the case, but today it seems that everyone wants to explain every “micro” change, such as a business losing its lease, by placing it in the context of big, “macro” changes, like “demographics.” Call it creeping generalization leading to panic.

It’s like Chicken Little has become our national bird.

Businesses go out of business every day. The stretch of Wilshire from Lincoln to say, 17th Street, has dozens of bustling businesses of all kinds. The other businesses in J & T’s old building are still there. Put it another way: shouldn’t we expect that some properties are going to turn over each year?

There are other examples, too, in Santa Monica these days. Take the use of the Ellis Act to evict rent-controlled tenants. Every year some property owners use the Ellis Act to get out of the apartment-renting business. To some people concerned about gentrification, this has created a crisis. But is that the case?

First, let’s be clear—whether it’s a tenant losing an apartment today or a homeowner being foreclosed upon in 2008, it’s terrible to be displaced. It’s also unfortunate in a place like Santa Monica to lose old housing stock, which is typically in the form of fairly dense apartments, and for it to be replaced by either fewer units or even single-family homes. None of this is good, and we need policies that don’t make evictions easy and that provide evicted tenants with generous assistance with relocation, etc. We also need to build more apartments that displaced tenants can move to.

But in our society, where nearly all housing is privately owned, it’s not realistic that turnover can be stopped entirely. According to the most recent Housing Element of the City’s general plan Santa Monica in 2010 had 39,127 multi-family residential units, most of which were built before 1980. They are an unbelievably valuable housing resource, home to most of Santa Monica’s population, representing generations of investment by thousands of property owners, all of whom have their own financial goals and make their own decisions to achieve them. The tenants of 27,542 apartments are protected by rent control, yes, but most Santa Monica apartments were built with “sticks and stucco.” Is it realistic to believe that none will be replaced over time or in any given year?

Are we in an Ellis crisis? Again, that’s what some people say, but Ellis activity is down, way down. Here’s a graph from the Rent Control Board’s most recent (2015) annual report, showing Ellis activity from 1986 to 2015: 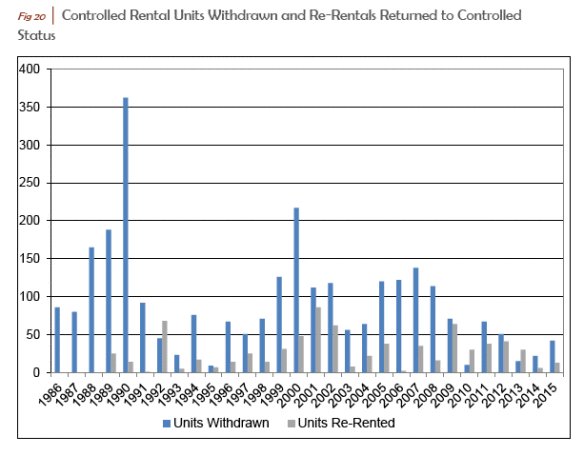 The graph shows that other than the recession years of the mid-’90s, and one year (2010) that reflected the Great Recession, we are at an all-time low in Ellis activity. Fewer than 50 units in each of the past four years, out of nearly 28,000 rent-controlled units, have been removed under Ellis (and almost as many units previously Ellised were returned to rent-controlled status). All this at a time of booming investment in the building of apartments: the only conclusion to draw is that the City’s policies have successfully tamed Ellising (and steered real estate investment to commercial zones), but that, yes, no policy can be 100 percent effective.

This “sky is falling” syndrome has even infected Rick Cole, Santa Monica’s cool and calm City Manager. Recently, after some bad traffic days mostly associated with Pier Concerts and the street grid needing to “learn” to accommodate more pedestrians because of the success of the Expo line (i.e., good things), Mr. Cole wrote a blog about downtown Santa Monica traffic that was like a full-blown panic attack: “Our streets are jammed.” “We finally hit the tipping point.”

Come on. The tipping point to what? At least since the ’50s on big beach days Santa Monica has been jammed.

Ours is the most accessible beach for more people than the population of Pennsylvania. That beach defines who we are, who we have always been, and who we will be forever. I appreciate that City Manager Cole may have wanted to use his blog to list all the creative things the City is doing to deal with transportation, but our beautiful sky is where it’s always been.