Throughout the world, residents demand services and cities need revenues to provide those services. Though it’s 78th in the state by population, Santa Monica provides a higher level of city services than most cities in California, from a low-cost fitness room to a 5-star library to a class 1 fire department.  Each of these services costs money, and Santa Monica is fortunate enough to be able raise revenues to provide this high level of services while maintaining a best-in-state bond rating.  Those who manage municipal finances in California will tell you this is no small feat.

But how does the city assure sufficient revenues to pay for the services residents demand? Before answer this question, there are two nuances one must know about California local municipal finance.

Second, the city’s finances are separated into two types of funds: special funds and the General Fund. Many special funds have restricted revenues that can only be used for specified purposes, including clean water or buying transit buses. Special funds can be enterprise funds which charge for services (for example, our water, sewer, and trash/recycling services), or earmarked funds from the state or federal government. The General Fund is the most flexible can be used for everything from libraries to police to litigation with the Federal Aviation Administration.

Breaking down General Fund revenues even further, we can see the sources where this money comes from.

Planning and development play a critical role in assuring the city’s tax base can pay for an increasing demand for city services.  All of these taxes require a certain land use to generate them.  Property tax isn’t generated from public facilities or churches.  Business taxes are generated from buildings zoned for office and commercial. Sales taxes come from stores and restaurants.  The transient-occupancy tax comes from overnight stays at Santa Monica’s motels and hotels.

But how efficient is each of these land uses and tax types in generating money to pay for city services?  I downloaded data on parcel uses from the Los Angeles County Assessor’s Office and then correlated it with the City’s publicly-available financial information.

As it turns out, on average, a square foot of land devoted to hotels and motels generates substantially more local tax revenues than any other land use. 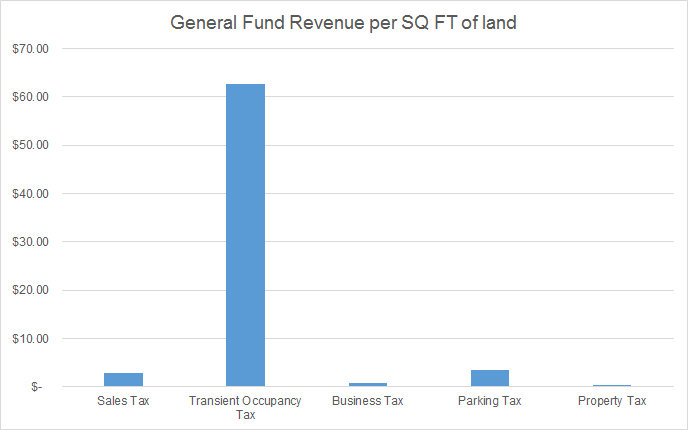 A 14% transient occupancy tax isn’t chump change, especially combined with the high rates at some Santa Monica hotels.  A 2-night stay at the beach-side Loews hotel over Labor Day weekend would run $1,238.72, with $148.72 in transient occupancy taxes going to the City of Santa Monica. In fact, over a month, a single hotel room can generate as much city taxes as a house assessed at $1.3 million. When someone tells you that Santa Monica has sold out to tourists over the residents, just remember that we’re taking a sizeable chunk from their wallets while they’re here.

Dominoes, Development, and Trains at the Santa Monica Museum of Art

Talking Change Over a Game of Dominoes at the Santa Monica...