Yesterday, Santa Monica Next covered the dueling legal opinions on Measure LV. Our conclusion was that at this point, it’s nearly impossible for anyone to say for certain what the full impacts of Measure LV would be, if it is passed. However, the number one indicator of who’s legal opinion is to be believed wasn’t based in an understanding of land-use law, it’s based on what side one finds themselves on Measure LV. 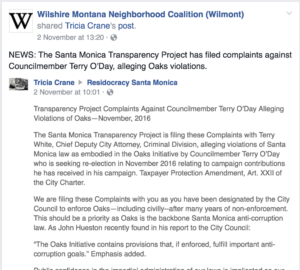 This syndrome, which also recently reared its head in the Midwest over whether or not a slide by Cubs runner Chris Coughlin was illegal, is rampant in America. Another example of this syndrome comes in examining whether or not the campaigns of Armen Melkonians or Terry O’Day are illegally coordinating with the Yes on LV or No on LV campaigns.

Matthew Hall at the Santa Monica Daily Press does a good job unpacking the complaints for those that are interested. Similarly to what we’ve seen with the legal opinions, we’re seeing the same with the accusations of campaign impropriety.

The all-volunteer Transparency Project is working hard to “expose” O’Day, but is ignoring the accusations against Melkonians. The Wilshire Montana Neighborhood Coalition has twice social media blasted news about O’Day. Silence about Melkonians.

Yet, among many of the people I know fighting Measure LV, Melkonians’ and the LV campaign are one in the same, breaking local campaign laws.

So here’s the thing. Regardless of whether or not LV passes, Santa Monica’s residents, businesses, workers and visitors are going to have to live with each other. There will likely be another ballot initiative in two or four years to “fix” or replace LV if it passes. There will likely be a less extreme measure if it fails.

I don’t expect this piece to move anyone in the next couple of days. This election has been tough, and not a lot of people are willing to sit down for wine and cupcakes with their neighbors with whom they disagree. But regardless of happens next week, can we all agree to figure out a way not to repeat this election in two years?