Earlier this year, Santa Monica Next reached out to all 10 candidates for City Council with an 11 question questionnaire. Some questions were written to give voters an idea of the candidates personality, others on their positions. So far, six candidates have responded. We would like to thank (in order of response) Terry O’Day, Gleam Davis, Mende Smith, Ted Winterer, John Mann and Terrance Later for their responses.

In past Q and A’s, we’ve made meme’s for one of the candidates to accompany the story. Since this is such a big question this election, we’re meme-making for each of the six candidates that responded to our efforts to better inform voters.

If you’re just joining us, here is a list to past Q and A’s:

Today’s Question : How are you voting on Measure LV? Why? 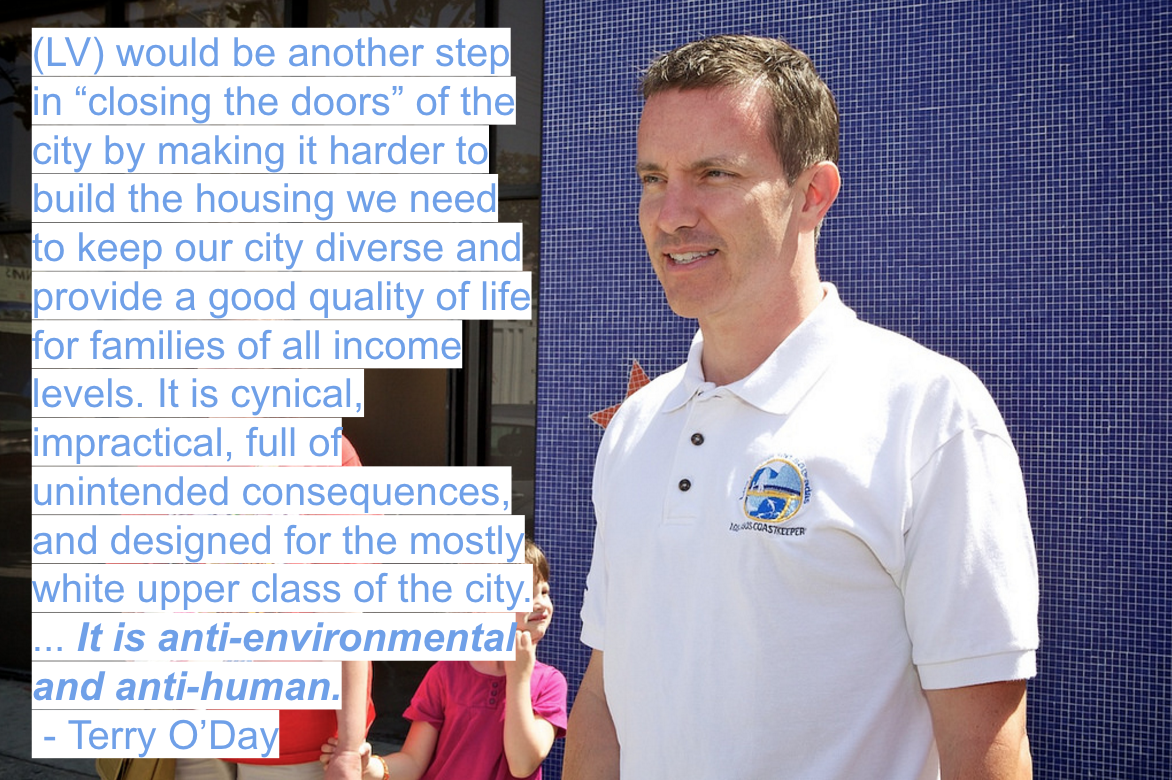 From the moment I read the proposed measure, I opposed LUVE (known now as Measure LV). I was one of the first Council members to have openly opposed LV. I am fundamentally opposed to ballot box planning, where complex issues are reduced to slick campaign slogans. In Santa Monica, where I helped drive the LUCE – our model community sustainability plan formulated over 10 years with hundreds of hours of community input – LV silences the voices of the community.

LV prevents the Council from protecting the sustainability and need for Smart Growth in Santa Monica. It would be another step in “closing the doors” of the city by making it harder to build the housing we need to keep our city diverse and provide a good quality of life for families of all income levels. It is cynical, impractical, full of unintended consequences, and designed for the mostly white upper class of the city. The initiative would require a vote of the electorate for any building over two stories and has no exemptions for institutions like public safety or schools, or for rebuilding after a disaster. It is anti-environmental and anti-human. 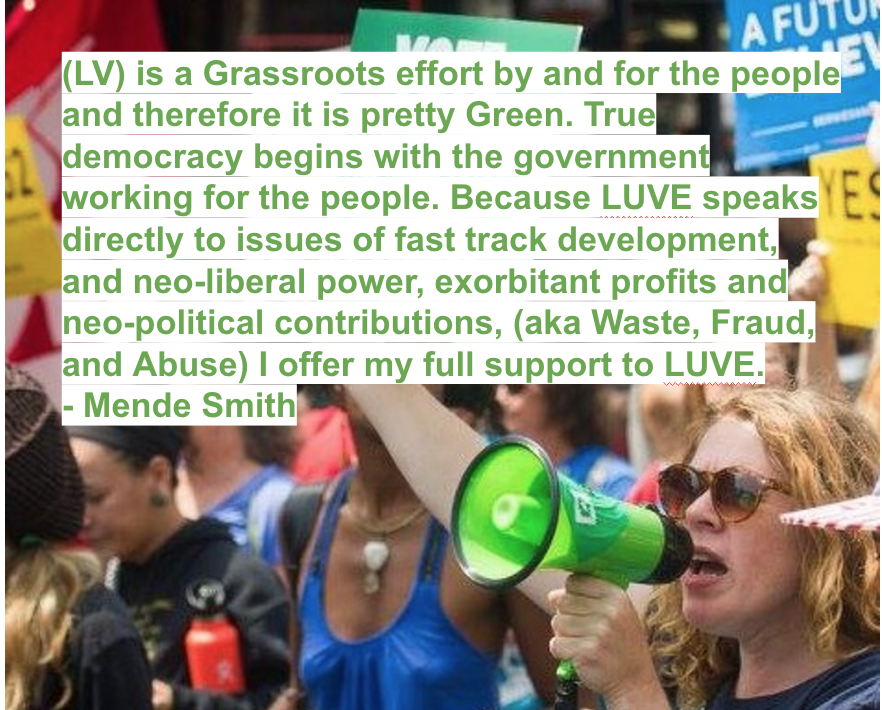 LUVE is the successful attempt by the residents to have a say in how Santa Monica is developed instead of trying to stop Big $$ Developer projects after closed door meetings and cash transfers from faux-conservative City officials and commissions. Is the legislation perfect? Certainly not. But it is a Grassroots effort by and for the people and therefore it is pretty Green. True democracy begins with the government working for the people. Because LUVE speaks directly to issues of fast track development, and neo-liberal power, exorbitant profits and neo-political contributions, (aka Waste, Fraud, and Abuse) I offer my full support to LUVE. 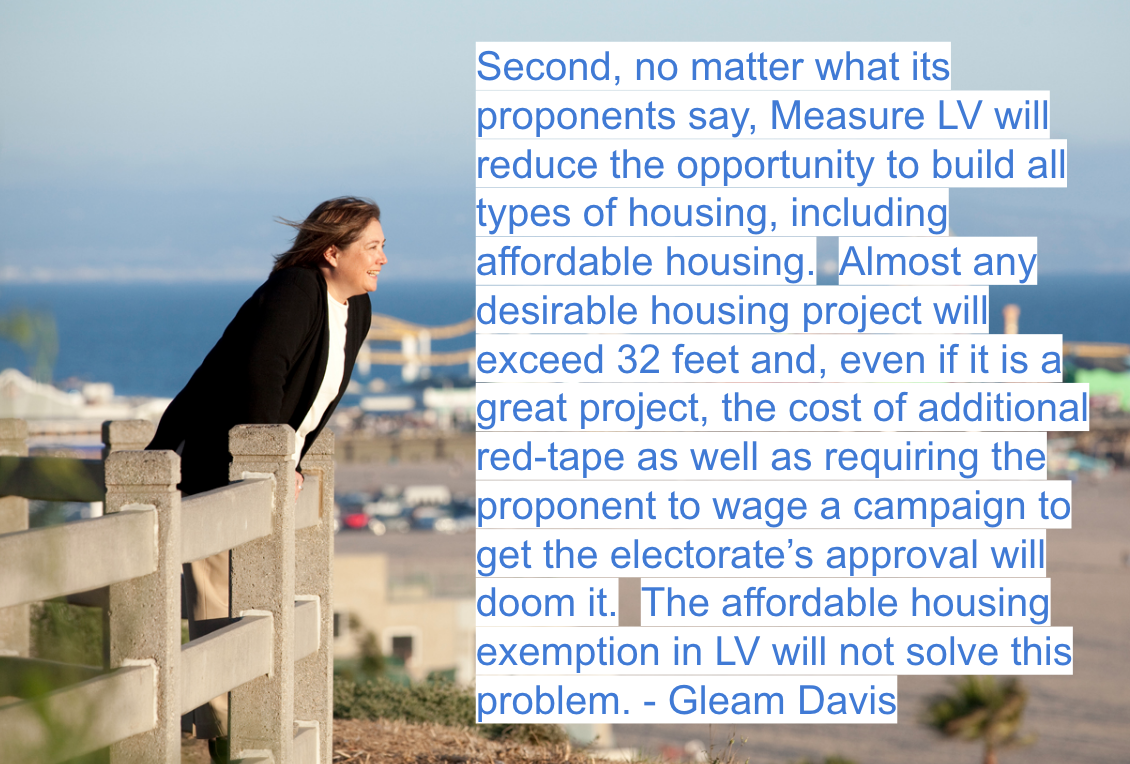 I am voting No on Measure LV.

While I understand the concerns about traffic and other issues that inspired it, I believe it has many flaws.  First, I believe it will prevent Santa Monica from growing in an intelligent, coordinated, and sustainable manner.  If we are to reduce our city’s greenhouse gas emissions and address difficult problems such as traffic and parking, we need to develop densely in areas where walking, cycling, and taking public transit or other non-automobile modes of transportation are convenient and safe.

Second, no matter what its proponents say, Measure LV will reduce the opportunity to build all types of housing, including affordable housing.  Almost any desirable housing project will exceed 32 feet and, even if it is a great project, the cost of additional red-tape as well as requiring the proponent to wage a campaign to get the electorate’s approval will doom it.  The affordable housing exemption in LV will not solve this problem.  With the loss of redevelopment funds, a significant portion of deed-restricted affordable housing in Santa Monica is built as part of market rate housing projects.  This inclusionary housing model is not exempt from the provisions of LV and therefore will cease to be a meaningful source of affordable housing.

Finally, studies of similar measures in other cities have shown that these measures accelerate the process of gentrification by creating artificial housing shortages and driving up housing prices and residential land value.  This encourages home buyers and investors to look for opportunities in more modest and diverse neighborhoods which then prices out the current residents.  Thus, where these type of measures are in place, cities become less diverse and whiter. 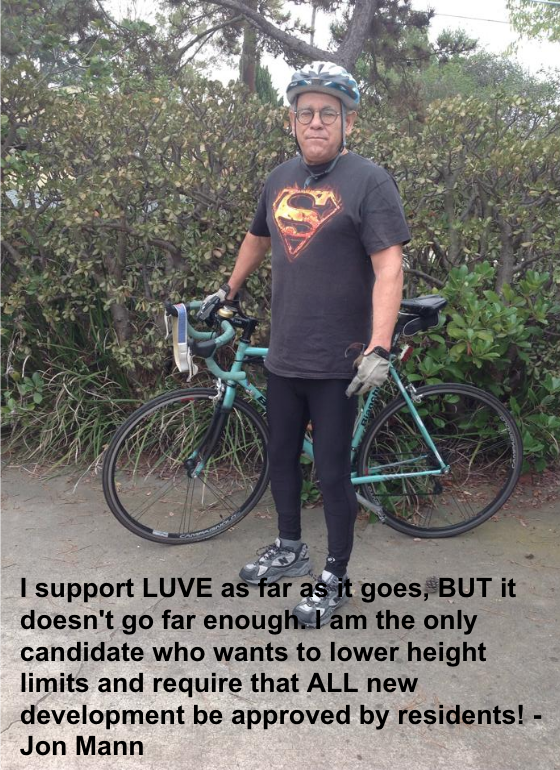 I support LUVE as far as it goes, BUT it doesn’t go far enough. I am the only candidate who wants to lower height limits and require that ALL new development be approved by residents! 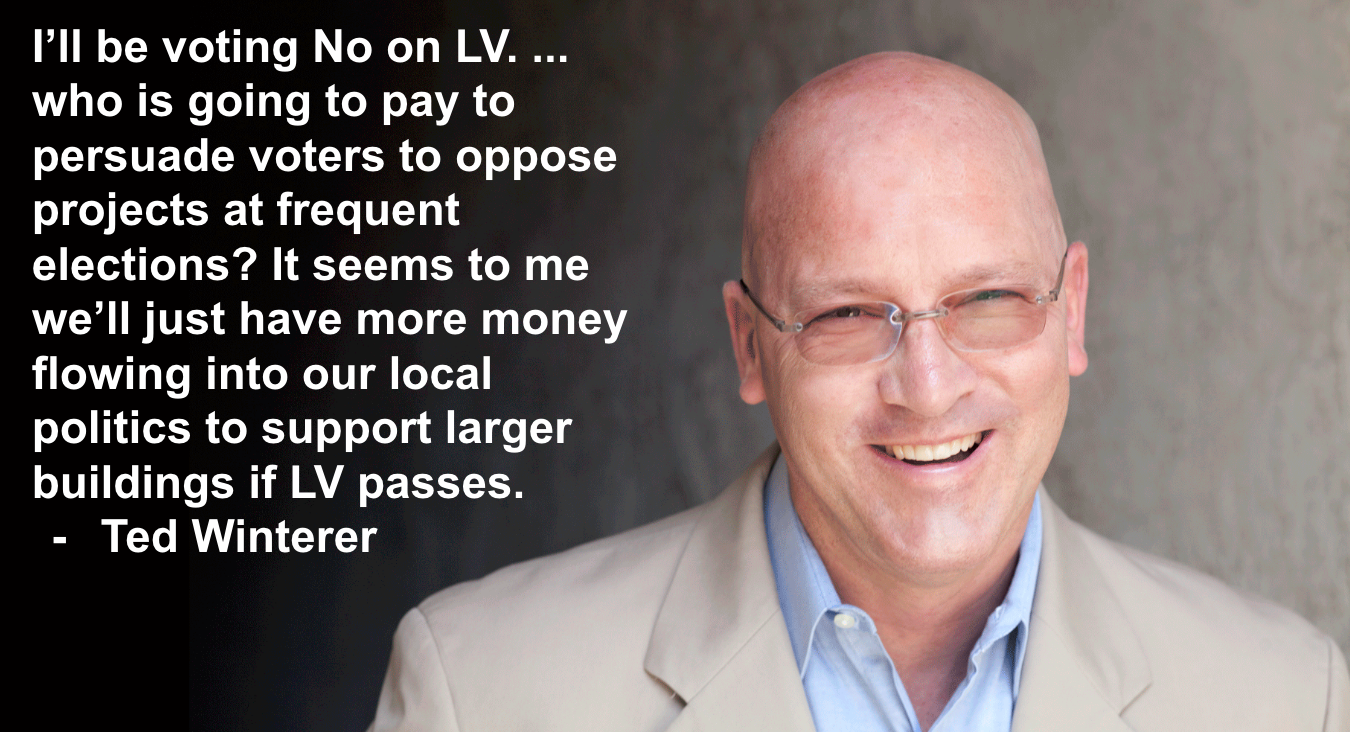 I’ll be voting No on LV. Its prescription for voter approval of all development over 32 feet, which means two stories on our commercial boulevards and downtown, is intended to fight traffic. However, using building height as a metric for trip generation is misguided. A two story medical office building, allowed without a popular vote under LV, will generate more traffic and vehicle miles travelled than a four story housing project that would require a vote. Moreover, the requirement for voter approval is likely to incentivize project applicants to pursue the largest possible projects to offset the cost of a campaign for approval. And who is going to pay to persuade voters to oppose projects at frequent elections? It seems to me we’ll just have more money flowing into our local politics to support larger buildings if LV passes. 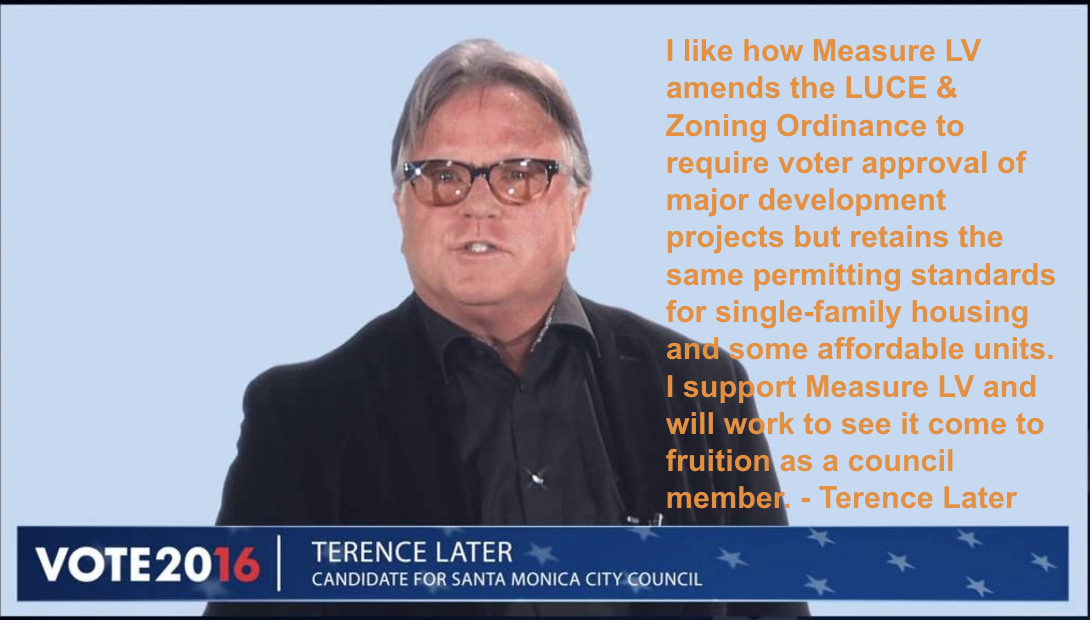 I support Measure LV because it will shift the power back to the citizens of Santa Monica. Currently, we are experiencing an explosion of development and the people of Santa Monica should have a vote in how our city expands and at what cost. I like how Measure LV amends the LUCE & Zoning Ordinance to require voter approval of major development projects but retains the same permitting standards for single-family housing and some affordable units. I support Measure LV and will work to see it come to fruition as a council member.