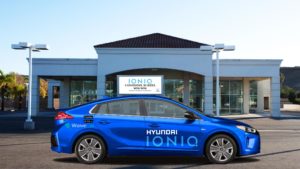 Last January, WaiveCar launched in Venice and Santa Monica, but now the company has plans to allow licensed drivers access to “free cars” throughout Los Angeles.

The free car-sharing company put twenty vehicles on the ground and generated revenue through advertisements on the side of the car and an mini-electronic bill board on top of the car. The program promised a major expansion in 2017, putting 200 cars on the ground in Greater Los Angeles before the next year is out.

Earlier this afternoon, WaiveCar announced that its expansion plans are actually going faster than originally planned. The car share company is now upping estimates to 250 cars before next year is out, all of them Hyundai Electric IONIQ’S. Most of the new cars, 150 of them, will be driving through Los Angeles before the end of June.

The partnership gives drivers the ability to drive IONIQ on-demand for two hours at no charge. As mentioned above, the vehicle is wrapped in advertising and includes a roof mounted digital display, which generates the advertising revenue WaiveCar uses to offset costs.

Once the two hours are up, drivers pay $5.99 per hour. Cars must be returned to one of several parking locations throughout the city. The WaiveCar ap on the users smart phone will let drivers know where they can dropoff the IONIQ when their trip is completed.

WaiveCar’s digital displays are 4G connected enabling dynamic, geo-targeted advertising tailored to ones driving location and time of day. For example, while sitting in morning traffic coming off the I-10, the ad could read “wouldn’t you be more comfortable on a Big Blue Bus?”

Customers can simply download WaiveCar’s app for iPhone or Android, find an IONIQ near them, book it and start driving — no cards or keys necessary. WaiveCar then unlocks the door for consumers remotely, where they can find the keys inside. Insurance is also part of the all-inclusive-deal.

“We are extremely excited to be working together with Hyundai,” said Zoli Honig, WaiveCar’s CTO & Co-Founder in a press statement. “Providing low cost, eco-friendly transportation alternatives to consumers is our core mission and offering the IONIQ will accelerate that goal. We believe this partnership will be tremendously beneficial for Hyundai, WaiveCar, our customers, and the environment.”

Studies have shown that car-sharing reduces car ownership, total vehicle miles traveled and vehicle emissions. For more information on the benefits of car-sharing, and an analysis of how some of the benefits are overstated, please read this article by Access Magazine.