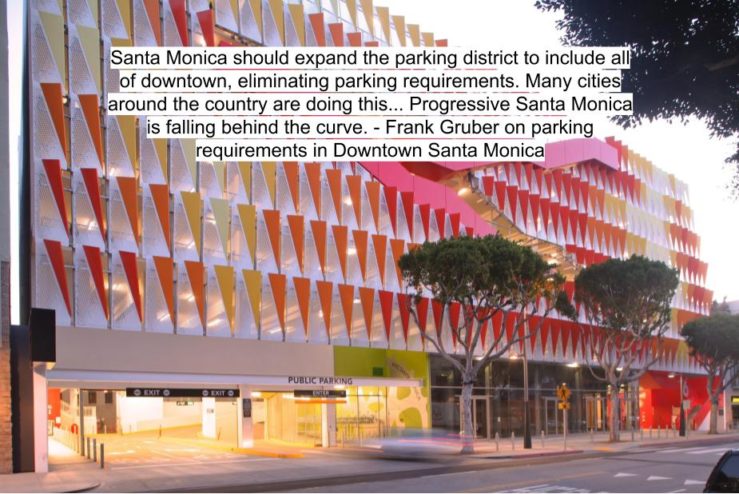 As I’ve written in two recent posts, tomorrow night the Planning Commission will review the Santa Monica Downtown Community Plan (DCP). After staff makes revisions to the current draft, the City Council will review and presumably (one hopes) vote on the DCP next spring. There will be plenty more time to comment on the DCP, but there are still two issues I’d like to focus on now: discretionary review and parking.

Discretionary review, however, didn’t arise from bad intentions. The original purpose of discretionary review, aside from allowing more detailed design and environmental review of large projects, was to permit more ambitious projects, but to “tax” them by having them pay “community benefits” to reflect some of the value that developers received from community investment and compensate for costs that development might cause the community to bear.

Using discretionary review for these purposes channels the “Community Benefits Agreement” movement that social justice organizations like the Los Angeles Alliance for a New Economy (LAANE) have successfully promoted and implemented.

But for every yin there is a yang, and while the ultimate purpose of organizations like LAANE was to bring economic development to under-invested communities, anti-development elements in affluent communities latched onto discretionary review as a means for slowing, downsizing, or even stopping development by making development more costly and subject to delays, and riskier to the developer, who never could know for certain whether the project would be approved.

At which point discretionary review came to serve a third function, also negative. Policymakers and officials began to use discretionary review as a cover for not articulating definitive standards. They filled planning documents with rhetoric about, and pictures illustrating, general policies, but projects that would make those policies real were made subject, at ever-smaller thresholds, to discretionary review.

But then, cue the irony. In a healthy city like Santa Monica developers can make money if they can run the discretionary review gauntlet, and some developers here did so. Some projects were approved and some of them even got built. Yikes! The anti-development folks did a 180-degree turn, and suddenly what angered them most about the planning process was discretionary review. Now, they said, corrupt government officials were approving development agreements (DAs) without listening to the residents! (In fact, the officials had been too intimidated by the anti-development crowd to put real standards in their plans, and that’s why even routine projects required DAs.)

In Santa Monica this reversal, the attacks by anti-development groups on the development agreements they once championed, resulted in irrelevancy for the most important elements of the LUCE, namely, those dealing with the old industrial areas around Bergamot Station. It’s become clear that only by-right projects will proceed there, and any complicated projects, including for Bergamot Station itself, will be hopelessly tied up in “process.” Now the City is about to voluntarily do the same to downtown. The version of the DCP published in February was bad enough, requiring any development over 100,000 square feet to get a fully-discretionary DA, but now staff is suggesting that that threshold be reduced to 60,000 square feet.

So you wonder—what will it take for policymakers to realize that however they structure the process, with more review or less, the anti-development side is going to slam them if anything gets built? Why cater to them? They’ll get you coming or going. Why not try to develop zoning with definitive standards that equate to good projects (with good community benefits), so that 30 years from now the future residents of Santa Monica might look back and say that back then the wise were in charge (no doubt comparing them favorably to the policymakers of their day, who of course would be corrupt and stupid)?

Parking. Back in the ’60s, when Santa Monica was purportedly a sleepy beach town and/or leafy suburb run by the northern wing of the John Birch Society, the powers-that-be did something years ahead of their time. They created a shared parking district around what was then called the Third Street Mall. Property owners were assessed (taxed!) to build shared parking structures, and in turn were relieved of obligations to provide parking on site if they developed their properties.

Flash forward half a century, and in our “progressive” city, planners have come up with a downtown plan that is loaded with parking requirements, often calibrated for specific uses, meaning that a building’s future uses will be tied to its parking. This after the City has built shared parking at the main library and added more spaces in the parking district.

We’re told downtown is gridlocked. Then why require minimum amounts of parking? Readily available parking attracts drivers. Street parking downtown is not like in other neighborhoods, where residents need permit parking to make sure unrestricted spaces on the street are available to them. I don’t know of any streets downtown that don’t already have restrictions on street parking. Why should it be the City’s job to worry if future businesses or residents have enough parking? Let developers figure out if their tenants will need parking, and how much.

Furthermore, if parking is needed or desired, the City should not build and subsidize it. In fact, the City should open up zoning to allow private parties to build parking structures. If people need parking enough, they’ll pay enough to make it a business.

Santa Monica should expand the parking district to include all of downtown, eliminating parking requirements. Many cities around the country are doing this, as this map shows. Progressive Santa Monica is falling behind the curve.

Memo to Planning Commission: be bold. Ask staff to evaluate deleting all parking minimums in the DCP.