Less than one month from today on January 1, 2017, Santa Monica’s new paid sick leave provisions under the City’s recently adopted Minimum Wage law will become effective. State law already requires all California employers to offer employees 24 hours of paid sick leave.  Under Santa Monica’s law, Santa Monica employees will benefit from increases to 32 or 40 hours, depending on the size of the employer. 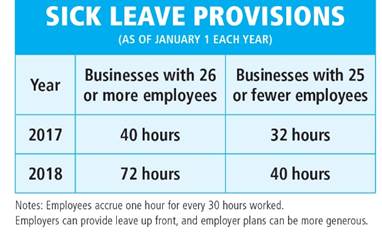 “Santa Monica cares about the health and safety of its workers and part of that is giving hard working people the right to time away when they are sick. This is something many of us take for granted, but for a large group of workers, missing a day on the job hasn’t been an option until now,” said Mayor Vazquez. “We worked closely with workers and businesses to develop a law that is fair.”

The Santa Monica Minimum Wage Working Group recommendation was to delay paid sick leave implementation for six months from the law taking effect and phased in the increase over two years to allow time for local businesses to prepare.  Paid sick leave is a fairly new requirement for California businesses. The State sick leave provision started just one year ago, and prior to that time businesses in California were not required to provide their employees with any sick leave benefits.

With the new Santa Monica Minimum Wage law, which went into effect on July 1, 2016, thousands of low-wage workers are now receiving higher wages and will soon benefit from additional sick leave benefits. The new law also makes the use of service charges more transparent to consumers and requires these charges to be distributed exclusively to employees.  The City has the authority to enforce the law’s provisions.

According to the law, here’s how it works:

Employees can carry over unused accrued leave up to the cap (32 hours for small businesses and 40 hours for large businesses).

“Paid sick leave is not just a benefit but a right for all employees,” said Frank Gruber, former chair of the Santa Monica Minimum Wage Working Group. “I am very proud of these forward-thinking provisions in Santa Monica’s minimum wage law. They have been designed to benefit not only workers, but also employers by improving their ability to retain skilled and dedicated employees, and by leveling the playing field among employers.  Many studies have demonstrated that paid sick leave helps to reduce the spread of disease and work-related injuries and helps gives workers the ability to care for their sick children. This is important for the health and wellbeing of our workers and their families.”

The ordinance was adopted after an extensive community outreach process involving the business community, residents, workers and labor groups. Santa Monica’s new minimum wage schedule aligns with those adopted by the city and county of Los Angeles. The state of California also recently adopted a new state minimum wage, which goes into effect in January 2017.

The City has contracted with Los Angeles County Department of Consumer and Business Affairs to provide minimum wage enforcement services for Santa Monica.  Any Santa Monica employee can call (800-593-8222), email [email protected], or go in person to any LA County office to ask questions about an employment practice, report a problem, or file a wage claim.  Services are available in English, Spanish, Chinese, Korean, Tagalog and Armenian.

For details on Santa Monica’s Minimum Wage law, including sick leave and all other provisions, visit www.smgov.net/minimumwage.