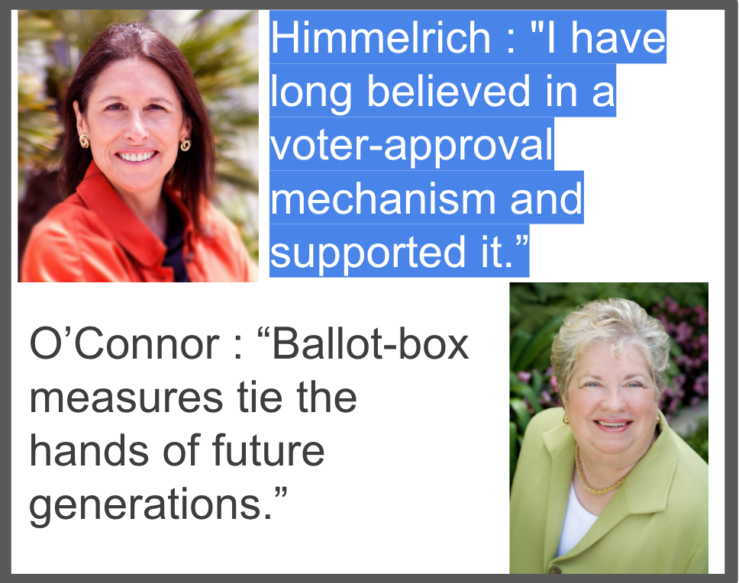 What will it take to end the divisiveness surrounding development in Santa Monica? That was the ostensible question underpinning the discussion at the Santa Monica City Council meeting early Wednesday morning.

Councilmembers Gleam Davis and Kevin McKeown together placed an item the agenda as last week’s meeting that called for staff to “explore the procedural steps necessary to establish voter approval requirements… and/or require a super-majority Council vote on projects,” according to the official agenda.

The discussion comes only a month after voters soundly rejected Measure LV, a no-growth ballot measure that would have required a city-wide vote of nearly all projects taller than 32 feet. The measure lost by nearly 11 percentage points.

Still, the divisive nature of the election and with supporters of Measure LV often making claims about development plans in the city of Santa Monica that were factually inaccurate, McKeown said he wanted to discuss the issue in an effort to “end the war,” he said last Tuesday.

Davis said that while the item did explicitly mention the possibility of a voter-approval measure or a supermajority Council vote requirement for future projects over a yet-to-be-determined size, “I’m not saying I’ll support any of these things.”

Instead, she said she recognized that there is clearly some dissatisfaction in the community with the city’s planning process. She hoped the conversation could lead to finding common ground among the different camps in the community.

Councilmember Pam O’Connor, who abstained from the final vote, was concerned, however, that the discussion was being directed to favor a future measure that would require voter approval of developments over a certain size.

“Ballot-box measures tie the hands of future generations,” she said.

Also, increasingly studies have shown that when vibrant places enact barriers to new housing, the consequences are increasing rents and gentrification. This clearly applies to Santa Monica.

Last year, a report by California’s Legislative Analyst’s Office (LAO) pointed out that the lack of new housing, especially in coastal California, is squeezing out the poor and middle-class and pushing them farther and farther from the quality job and education opportunities available in those communities. This “toolkit,” published by the Obama administration in September, reaffirms the LAO’s findings.

Over the years, Santa Monica has largely been a slow-growth city, which is, in part, why rents continue to rise.

Councilmember Terry O’Day said that while he supported the intent of the motion — to bring the community together — he didn’t think a discussion exclusively about ballot-box planning was the best way to do it.

“When we think about why Measure LV failed, it’s not just because 32 feet was too low or we couldn’t rebuild buildings because of the drafting, but in particular it was because ballot box planning is not desirable or wise.”

He said that he would like included in the staff report that comes back to the Council on this issue a look at what has worked in other communities and what are some of the state-of-the-art approaches to community engagement around planning.

Several Councilmembers stated their support for the idea of requiring a supermajority of the City Council to approve projects above a certain threshold, including Councilmembers Sue Himmelrich and Ted Winterer.

Himmelrich also said she had “long believed in a voter-approval mechanism.” Winterer defended the idea of voting on projects as an avenue worth exploring assuming it would be for projects outside of the existing zoning standards, once the city adopts the Downtown Community Plan.

How the Council will proceed is still very much up in the air. The agenda item simply called for staff to give a report on some option and O’Day amended the direction to City staff before the Council voted 6-to-0 to approve it to include open language about bringing back more information on what are the best practices in other cities.

Once the Downtown Community Plan is approved, the process that started in middle of the first decade of the 21st century with the Land Use and Circulation Element update, will be concluded, at least for about another 20 years when the plans will need to be updated again.