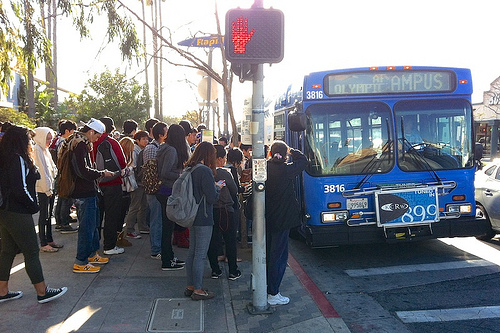 Big Blue Bus (BBB) will adjust its service to better connect customers to the places they live, work and play. BBB will be adding service to six bus routes, and improving schedules on seven others, beginning February 19, 2017.

Customers can also expect to see scheduling changes and improvements on Routes 9, 14, 15, 41 and 42. Visit bigbluebus.com/servicechange to preview the new schedules.

“The changes we are implementing will enhance reliability, efficiency, and ease with which customers move across the region on our bus system,” said Ed King, Director of Transit Services at BBB. “They also address feedback received from customers since our last service change. For instance, customers indicated a desire for a one-seat ride from downtown to Century City and Palms, so we have restored Route 5 service from the Bergamot Expo Line Station to downtown Santa Monica,” said King.

Details of the February service changes, along with system-wide timetables, can be found in the “Little Blue Book” transit guide, which is available on-board, at the Transit Store, and at local public counters, such as local libraries and senior centers; Big Blue Bus System Maps are also available at these locations. In addition, bus arrival information is available on the NextBus real-time mobile application and Google Transit. The GTFS-realtime data which drives both applications will reflect new changes on February 19, so that customers have access to up-to-date information about bus locations, arrival and departure times.

Big Blue Bus operates a fleet of 200 vehicles transporting more than 54,000 customers daily across a 58 square mile service area. Nationally recognized for its long-standing commitment to a cleaner environment, the entire fleet operates on alternative fuels, including renewable natural gas (RNG), a form of liquefied and compressed natural gas (LNG/CNG), which helps cut emissions by up to 90 percent. Serving Santa Monica and the Los Angeles area since 1928, Big Blue Bus has won numerous awards for its marketing, customer service, safety and efficiency.