In order to assure the city benefits from some of the larger real estate development projects in town, the City Council negotiates development agreements (DAs) which guarantee affordable housing, traffic mitigation, money for parks, and other benefits for the city.

A recent audit of the 32 DAs the city has entered into since 1981 presented to the Santa Monica City Council last Tuesday shows that the system is working.

Of the 32 development agreements, only 20 have been built. The other 12 are either under construction — including the 90-unit apartment building on the former Norm’s site — or construction has yet to begin, such as on 500 Broadway, which will replace the Fred Segal building in Downtown Santa Monica.

The 500 Broadway project exemplifies the way DAs are designed to generate benefits for the community. The developers and the City Council negotiated the project over several years and in the end, the approved development agreement had a robust community benefits package. As part of the deal, the developers of 500 Broadway agreed to purchase property for, design, and build a 64-unit permanent affordable housing complex a couple blocks away from the main project. That building will be managed by the city’s largest nonprofit housing developer, Community Corporation of Santa Monica. In addition to that, the developers of 500 Broadway agreed to these other benefits:

DAs are voluntary contracts between the city and a developer, usually negotiated when a developer seeks to build a project out to the largest standards in the General Plan. They allow the City Council wide leeway to negotiate for items that they would otherwise not be able to force on a developer.

The starkest contrast between what the City Council can negotiate with a DA versus a project that is built simply to the basic requirements in zoning is the Bergamot Transit Village project.

The DA, which was negotiated over a seven-year period, was approved by the Council then overturned after a group of anti-development activists collected enough signatures to put the project on the ballot. The Bergamot Transit Village project was then abandoned and the current development being built there does not require a DA because it is within the basic requirements of existing zoning. Here is an illustrative contrast between the two projects.

The staff report presented last Tuesday does note that the DAs aren’t always perfect, though. All but one project are in compliance with the requirements outlined in their development agreements, and the one project that isn’t is falling behind on only one part of the agreement: its efforts to reduce the traffic caused by its employees’ commutes.

The outlier project is the Agensys building (1800 Stewart Street). In a report presented to the City Council, staff notes, it has failed to meet its end of the deal when it comes to getting its employees to car pool, take transit, or otherwise avoid driving into work alone.

The project’s DA, which was approved in 2010, requires that employees of the medical company that occupy the building average nearly two passengers per vehicle when commuting to work.

The actual DA requires Agensys employees’ AVR be 1.6 — or only about 62 cars commuting in and out of Santa Monica for every 100 employees — and later this year the AVR requirement will increase to 1.75, or about 57 cars per 100 employees.

The company’s proximity to the Expo light rail line, which opened up to Santa Monica last May, is part of the reason city officials required such an ambitious traffic management program for the project.

Staff followed up with Agensys to recommend the following steps to help the company reach its required targets:

The report shows that projects not complying with their development agreements to be the exception — and a rare one at that — to the rule. In fact, the report notes that Agensys is in compliance with the rest of the requirements in its DA, including a local hiring provision, coordination with Santa Monica College and Santa Monica-Malibu Unified School District on educational and career opportunities, public art, improvements to local infrastructure, and other benefits.

Still, the ongoing problem with Agensys meeting its traffic mitigation targets is instructive. What will it take address the issue of traffic in Santa Monica?

A significant portion of Santa Monica’s weekday traffic is a result of people commuting in to work here, a direct result of the city’s significant job growth over the last couple decades and the failure of the city to allow for commensurate housing growth.

People who work in Santa Monica generally have to seek housing increasingly farther from their jobs and as they move farther afield, public transit and other alternatives to commuting alone in a car become less feasible. 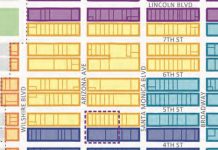