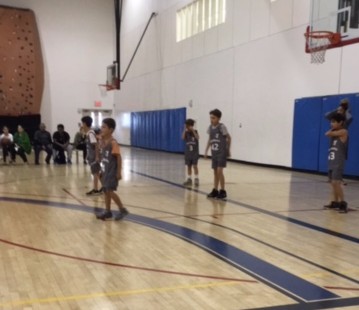 Now that all of the 30 teams involved in the Santa Monica YMCA youth basketball league for the Spring of 2017 have played at least one game, things can really get going this weekend heading into the annual two week spring break layoff. Last week was full of standout performances and four teams racing out to the best starts possible—one in each division.

–The Icemen held off the Skywalkers in a close battle throughout, 25-21. Jared Oliver led the victory party with 9, same as Aidan Murphy had to support a losing cause. Oliver chipped in with ten rebounds, and Noah Kratz had 6 points. Murphy and teammate Jaxson Glowacki split 23 rebounds.

–The Doctors opened a two game weekend with a 22-21 win over the Wizards (20-14 in regulation tie, lest you think it was a thriller). Jacob Puente missed a double-double by a single point, and was helped well by Ryan Kazerani. Eli Eng did his best to help the Wizards keep up with 9 points and 7 steals, while Lukas Greblikas and Lorenzo Stabilini combined for 17 rebounds.

On Sunday night, the Docs came right back with an impressive 32-23 win over the Admirals, with Puente this time blowing the game open with his consistent play leading to a 13 point performance. He missed a double-double by a single rebound this time around. Amir Jahromi was a standout with 13 rebounds. A 9-2 Doctors run in the third quarter put the game out of reach. Kazerani had 8 in the win. Ben Adelman led the Admirals with 10.

In Rookie League action Saturday afternoon, the Tornados bounced the Zephyrs 15-10, holding the losing squad to but one basket throughout the regulation time frame, that from Max Baracy. Cassius Taylor did most of the damage for the T’s with 5 points and 13 rebounds.

–On Sunday, the Hurricanes won a tight one over the Typhoons 5-4. Josephine Casas’ third quarter basket was the difference maker, while Archer Aguilar scored the Canes only other hoop and Ethan Olson-Shahar hit a very important half time free throw.

Aiden Lin and Ryan Schuster each scored in the second period to give the Typhoons a lead, but that was the sum and total of their scoring experiences for the day.

–The Breeze blew open a tight game mid-way through the third period and rolled to a 19-13 win over the Monsoons. In seven previous seasons, Yusuf Jooma had scored one basket…total! On THIS day he scored two of them!! Not to be outdone, Alex Ma had scored one basket in three previous seasons, and TODAY scored 3 more!! Add in Noah McLaurin’s 4 point, 8 rebound, 7 steal day and it was just enough for the Breeze.

James Cook got his first Samo Y bucket for the Monsoons.

The Major league got it going with a full schedule to close out Saturday.

–John Woods poured in 14 to go with 15 rebounds and Kasra Sariri had a monster 24 -game to go with 12 points as the Big Os held off the Bid Dippers 40-35. Ezra Kreiger just missed being the third member of the team with a double-double as he went for 8 and 10 boards.

Nasir Luna led the Dippers with 11 and newcomer Yissacor Tewodros added 7. Jaon Tun made his big league debut with 6 points. Sam Adelman did the same for the Os with 4.

–The Captains defeated the Dreams 39-34 as first season player Preston Calder opened observers eyes with a nifty dozen points from all over the floor. Spencer Farkas, Eli Levi and Casey Christmas combined for most of the rest.

Dylan McFarland led the Dreams with 13, as Ryan Abousseua and Andrew Daouda grabbed 9 rebounds each.

–Down a couple of big name players, the Glide couldn’t keep up with the Goats, dropping a 36-30 decision. Ben Turkel did his best in defeat with a league high 18 points on the day, and was aided by Nico Kenneally’s 7. Turkel pulled down one less rebound than he had points.

For the winners, it was a team effort, as four players scored 5 or more, led by Keenan Bryant’s 8. Gaspar Antal and Zion Qurtman each had double figures in rounds.

–The Magic rolled over the Legends, who were without arguably their two best players. Aron Zakharin led the winners with 10 and Miguel Picazo had a dozen boards and 9 points.

–There was one Sunday Major league game, and in it the Big O’s made their coach’s pre-season prognostication sound like his old hero Lou Holtz, as they knocked off the Glide 33-24.

Woods dropped in 16 to go with 10 caroms this time. Cold shooting and bad luck combined to thwart the Glide in this one. Buzzard’s luck you might call it.

–The Mustangs beat a Julian Haggart-less Broncos team up, 30-16. Emiliano Slesaransky dropped in twelve points from close range and Travis Waters 9 from less so in the win. For Emi: a double-double as he also had ten rebounds. The Broncs were held scoreless in the second half after trailing by only two at the intermission.

–The Colts made short work of the Shetlands, 31-20 as Ariel Aframian wowed the scant few onlookers with a 16 point performance, mostly on driving layups. Asser Tewodros added 6 more for good measure.

–In yet another blowout the Appaloosas took it to the Clydesdales 29-15. Isaac Samy was hot with a dozen points and 16 rebounds in victory. Dash Hansford added a half a dozen more. Clark Elliot looked good for the Clydes.

–The Palominos outlasted the Thorobreds 20-15 (16-8 in regulation play). Jake Ronn blew the game open almost single handedly. Fist he scored from 13 feet out on the left side to make it a 6-1 game with 5:55 to go in the third quarter. Just before the sub break, Griffin Boccella got his team’s first basket to make it 6-3, but out of the break Ronn his from the left side again to up the advantage to 8-3.

Then once more to make it 10-3. Before the quarter was over, the Ronn show continued to roll, and it was 12-3 and it was over. Boccella finished with 6 of his team’s regulation 8 points.

This week’s action could be interesting, as it is the start of the spring break for local public schools and as such, teams might have trouble fielding teams. We will see which ones come up with the best layers from their own squads and which can find the best talent from the lower divisions to help out if needed.

All other things being equal, Saturday has a Minor League game between two 1-0 teams at 3 p.m. as the Icemen meet the Mambas, and on Sunday at 12:50 p.m. the same holds true of the Major Magic and Goats.

There is a minimum playing time limit of half the game. However, that will not be the case if all 11 players on any of the three (one Rookie, two Minor) teams carrying 11 players happen to show up on the same day. If that’s the case, the players will be placed into a rotation by their coach and they will play as much as possible. The league office tried to make sure teams only carried 10 players, but it was not possible to do it exactly that way this time around.

Each division has some different rules. In the Rookie League, the ball we use is a youth ball (27.5), baskets are lowered to eight feet, and no defense is allowed outside of the three-point line.

In each division, players fouled in the act of shooting will shoot those free throws at the end of each half. If a team gets ahead by 15 points, they must back up defensively to the next line. In the Majors, that means half court; in the Minors that means the three point line. In the Bantams and Rookies that means inside of the key. If the lead increases to 20, they back up more, or in the case of Bantams or Rookies, play mild defense, if any at all. If it goes to 25 or more in the Majors, they back up in to the key. Teams may, but do not have to, come back out on defense if the score reverts under those margins.

You can expect an edition of the league newsletter each week, usually by Tuesday, depending on how much other work I have to do. It is my primary way of contacting you, so please read it thoroughly each week. Feel free to forward it to those who might like to see a copy.

Please do not coach your children from the sideline. It hinders what the coach might be saying to them and is confusing.

Please no food or drinks in the gym other than bottles with caps screwed on well. No gum, of course.

All spectators must sit on the benches provided or stand behind them, do NOT congregate in the entrance to the gym, and you may not sit along the end of the court. You may bring your own sports chairs, provided they do not scratch the surface of the gym floor.

Please clean up the spectator area after your game and leave it nice for the next fans who are coming in.

Also be sure to have your team players (your kids!) clean up under their bench when the game is over, or assign a parent from your team to do so each game.

At the end of the day, please assist in gym clean up and in putting away the benches and chairs into the equipment closet.

Any items left at practices are turned in by our custodial staff to the front desk and placed in our lost and found. Bringing expensive items to a game is never a great idea. If the director finds any items at the end of a game day, he places them in his office.

If you have an issue with your coach, please bring it up with them. If you do not feel comfortable doing so alone, have another parent listen as you speak to the coach. If you still can’t iron out a solution, we will set up a meeting with me and the coach and you all in the same room face to face. I’d prefer you take care of it yourselves, of course, but I am there as you need.