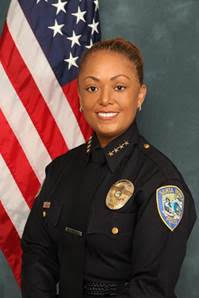 Chief Seabrooks began her career at SMPD as its first African-American woman patrol officer in 1982. When she became chief of the Inglewood Police Department in 2007, she made history again as California’s first African-American woman to serve as police chief for a municipality. Santa Monica was fortunate to welcome back Chief Seabrooks in 2012 when she returned to her roots and took the reigns as our chief of police.

“The distinctive spark that has carried Chief Seabrooks to ever-advancing roles of leadership was there from her time as a patrol officer,” said City Manager Rick Cole. “She will leave an indelible mark on the Santa Monica Police Department and we will miss her relentless focus on fighting crime, engaging our community and making our department a model of 21st Century constitutional policing.”

Chief Seabrooks has consistently provided transformational leadership as she implemented the tenets of 21st Century policing during a time of national conversation regarding policing practices. She has focused her leadership on strengthening community-police partnerships and building a force that is responsive to community needs. She has also been quick to adapt to changes in police practices and trends.

Under her leadership, SMPD launched a body-worn camera pilot, implemented a state-of-the-art interoperable radio system, consolidated the Police and Fire Departments Communication Centers, updated the SMPD’s critical equipment, and acquired the hand-held technology needed to enable SMPD to respond to the legal requirements of AB 953 (Racial & Identify Profiling Act) well ahead of schedule.

Chief Seabrooks provided decisive and steady leadership in the aftermath of a spree shooting which gripped the community in June 2013.  This mass shooting, which occurred against the backdrop of a Presidential visit, left six people dead, including the suspect.  Chief Seabrooks has also been attentive to civilian and sworn staff development and on employee wellbeing.  She is a member of various professional associations, serves on the boards of directors for several community organizations, serves as a mentor to aspiring police executives, and is often asked to speak on contemporary public safety issues at various symposia and conferences.

“I am both pleased at and appreciative for the opportunity to have worked with our community, those in municipal administration, and the men and women of the Santa Monica Police Department as we collectively made Santa Monica a safer place.  While I will miss all that is unique and wonderful about Santa Monica, I know the City and the Police Department are well prepared for this transition,” said Chief Seabrooks.

“Chief Seabrooks is a person of great integrity who is widely respected in the community and nationally,” said Mayor Ted Winterer. “She has protected this city and upheld our values for three decades and for that, we are grateful.”

The Santa Monica Police Department employs 460 sworn and civilian personnel and has an annual operating budget of $86.6 million.

Seabrooks’ retirement becomes effective September 30, 2017. A national search will be conducted to find the next police chief. An interim chief will be named while the search is conducted.