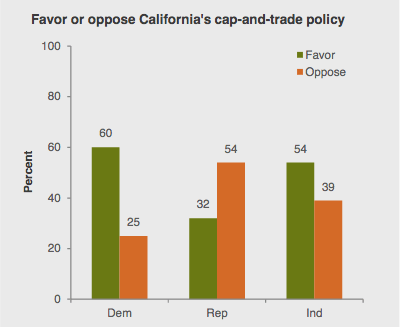 The nonpartisan Public Policy Institute of California (PPIC) released results of a survey that found that most Californians favor the state’s greenhouse gas emission reduction targets. This is so even while most of them expect gas prices to rise as a result of policies to reduce GHGs.

Many people being interviewed for the survey at first said they didn’t know anything about the cap-and-trade program. When survey takers read them a description of it—“the state government issues permits limiting the amount of greenhouse gases companies can put out. Companies that do not use all their permits can sell them to other companies. The idea is that many companies will find ways to put out less greenhouse gases, because that will be cheaper than buying permits”—the majority said they supported the notion.

That includes most Democrats and independents, and “sizable percentages” of Republicans, according to Mark Baldassare, president of the PPIC. “There is broad consensus for the state’s efforts to address climate change, and many support the cap-and-trade system,” he said.

When given even more detail: that cap-and-trade revenues are spent on affordable housing near public transit, energy efficiency, high-speed rail, and public transit, and that the Legislative Analyst Office estimates the program will add fifteen cents to the price of a gallon of gasoline, approval for the program rose even more, with sixty percent of adults and 51 percent of likely voters saying they supported it.

A majority of Californians say that we have already begun to feel the effects of global warming, and that climate change is a serious threat to California’s future.

A host of other questions was asked during almost 2,000 interviews that took about twenty minutes each. The PPIC regularly conducts surveys on a wide range of topics, and in this one found a “record-high” percentage of people who are willing to live with higher energy costs in support of California’s climate change and energy policies.

At least, that’s what people say when they are surveyed. It will be interesting to see if this changes over the course of what may well be an ugly ballot fight next year. An attempt to repeal S.B. 1, the transportation funding measure, may qualify for the ballot, and Californians will also be asked to vote on whether the cap-and-trade funds should be held up until they can be passed with a 2/3 vote.

And while it’s great that people are making the connections between climate change, their own energy costs, and the costs of reducing greenhouse gas emissions, we still need to see resulting changes in people’s travel–and other–behavior. Some of that is up to state and local governments, but some of it is up to individuals as well.

The findings are based on telephone interviews with 1,708 Californian adults, surveyed by phone between July 9 and 18. The full report, including the questions asked, can be found here.