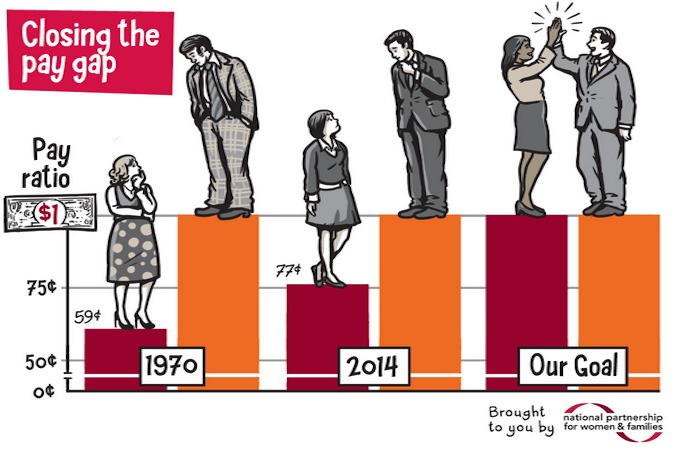 With the approval of a compensation philosophy that explicitly commits the city to equal pay for equal work, Santa Monica took a remarkable step forward in defining a new approach to government compensation.

At its July 24 meeting, the Santa Monica City Council adopted a philosophy based on recommendations from the firm Moss Adams, which was engaged by the City to conduct an independent review of employee compensation.

The new guiding principles state, “The compensation program should aim to retain and attract high-skilled, high-performing staff capable of delivering the highest standards of public service to our community. The City will expect all staff to consistently perform to those high standards in their work performance, service, ethics and passion for public service. The City will also strive to administer pay and benefits in a way that is fair and transparent to all, that provides equal pay for equal work, and that does not take into consideration race, ethnicity, religion, sex, gender, sexual orientation, gender identity or expression, or other factors unrelated to work performance.”

On the surface, this doesn’t sound revolutionary – but incorporating equal pay for equal work is a change that will have positive ramifications for the city’s budget and workforce. Santa Monica’s compensation philosophy is progress toward creating not only a more inclusive and diverse city staff body, but a more efficient organization where compensation will be rooted in performance and work product, and not outdated, unsustainable ideas of how a government should be operated.

Here are three major impacts of this change:

There is a well-known unfunded pension liability of approximately $460 million on Santa Monica’s books. What’s less understood is that this pension liability is not spread out equally across employees. Pension reform dictated by state law and by the city’s own policy changes has resulted in ‘tiers’ of pensions – with newer employees and those with a break in government service receiving sharply smaller pensions.

According to the city’s own data, 34.6% percent of Santa Monica employees are receiving reduced pensions unrelated to their work performance. It has been an unfortunate practice in many government agencies to push the cost of pension reform onto new employees.

Now that the city has explicitly committed to equal pay for equal work, this discrepancy must be rectified (and there are ways to do so that do not increase the pension burden – namely rebalancing high salaries in favor of performance bonuses and retirement account contributions).

2. Elimination of seniority considerations on layoffs.

In addition to pension discrimination, another violation of the compensation philosophy is the role of tenure in determining layoff order. According to municipal code, in the event that layoffs are necessary, employees with longer tenure or seniority in the city will be able to ‘bump’ junior and newer colleagues out of their jobs (see 2.04.380 and 2.04.390). As with the pension liability, it does not make sense to push the costs of layoffs down the org chart to the newest, most junior employees. If layoffs become necessary, they should be carried out to minimize job loss and maximize economic savings to the city.  Employee seniority should not be a factor.

Health benefits are another area where inequality has become an issue. Traditionally, many employers, including the City of Santa Monica, have provided heavily subsidized healthcare for employees and their dependents. As medical premiums have risen in the city, these subsidies have become significant. According to the Moss Adams report (see page 35), the city pays up to $2,567 for employee + family health care, while single employees without dependents receive up to $759 for coverage.

Another is that they might be drowning in student debt and economically ill prepared for marriage and children, or struggling with infertility. At the end of the day, it does not matter what the reason is – parental and marital status should have zero impact on pay (in both directions). A move to a “cafeteria plan,” where employees could select how to use the City’s benefits package, would equalize this discrepancy, and give employees an opportunity to manage their finances according to their needs.

The above suggestions are the tip of the iceberg – there is much more exciting work to be done in examining and improving the City’s compensation practices. Not the least is examining compensation through the dual lens of race and gender, and other criteria. There will be uncomfortable conversations ahead about how to fairly and equitably compensate staff and how to address profound cultural changes in what have been fairly staid government compensation practices. At the same time, given the pension liabilities and the looming threat of a recession, these conversations are going to happen at some point or another – and the longer the city waits to confront them, the worse the economic pain to community and staff alike.

It should be noted that the first version of the compensation philosophy drafted by City staff and submitted to council did not include the language on equal pay for equal work; this change was suggested by Councilmember Sue Himmelrich during the Council hearing. As a member of the Compensation Study Advisory Committee, which advised the City on this work, I cautiously broached the topic of equity at the committee’s final meeting.

The Santa Monica City Council has made a bold move in approving a compensation philosophy committed to equality, now it’s time for bolder moves in making the philosophy a reality.

I stand ready to cheer (and prod) them on from the pages of this column!

Homa Mojtabai is a former analyst for the City of Santa Monica who was an agency shop leader during her tenure on the City staff. She has an MBA from the Wharton School, and was a management consultant with the Boston Consulting Group before committing to strengthening the public sector through good public policy. She is now in public higher education.