While Santa Monica is as bustling as ever — just ask the 8.7 million visitors the City hosted in 2017 — the downtown parking structures are seeing fewer parkers and hundreds more free spaces each day.

We analyzed downtown parking structure data for Structures 1 through 9 and the Main Library reported to data.smgov.net to find out. Since 2015, on average the number of parking spaces available at the busiest times of each week has increased from about 1,100 spaces to 1,800. (Click here for the full methodology.)

That’s 700 more spaces on busy days just sitting around than only four years ago. That means about one-third of the parking spaces in the structures analyzed are empty at the times of peak demand!

But the changes don’t just show up in the averages, let’s take the extremes. Look at how many spaces were still available at the peak moment on the five busiest days of each year from 2015 through 2019: 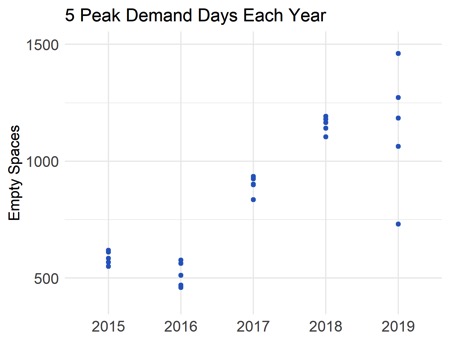 One look at the 10 Freeway or surface streets is all you need to know that the cars haven’t disappeared. So why would we see parking in downtown Santa Monica decline over this time period? We didn’t attempt to tease out direct causation. But some possibilities reflect broader transportation trends that make it easier to get downtown without parking:

All of these represent seismic economic and social changes that either nudge people to come to downtown Santa Monica without a car that they then have to park, or to get a service from downtown (i.e. a HiHo Cheeseburger) without physically going downtown (via a food delivery service).

A call for safer streets

Recognizing that downtown Santa Monica now has an average of 1,800 empty spaces at the point of peak demand — that’s 1 in 3 of all downtown structure spaces — we can begin to envision what we could do if we began to repurpose some parking spaces in downtown, both in our structures and on our streets.

We can have all of this simply by repurposing 700 parking spaces in downtown Santa Monica that we literally, as the data show, no longer use even on busy days.

What the above also represents is a down payment on a sustainable future. A first salvo in a local Green New Deal that could help Santa Monica tackle its largest source of climate pollution – tailpipes from local cars.

So how do we do this?

But in Santa Monica, we have 700 spaces of free parking, as in available parking spaces we no longer need. And the cost is the opportunity cost of squandering such a valuable resource.

We have 700 spaces of parking glut just compared to 2015, and to fail to put those spaces to use building a more healthy and sustainable city would be a terrible waste of free parking.

On November 12, the Santa Monica City Council will host a study session on the future of mobility in our community. On the docket will be an 18-month review of the pilot program to allow dockless scooters and bicycles.

This is precisely the time to ask: Are our streets serving how Santa Monicans have shown they want get around? And are they guiding us towards a future where we need to get by with even fewer gas-burning vehicles?

The answer is that we need to rethink our streets to better support people opting out of their cars, especially downtown, and opting out of parking even when they do come downtown in cars, i.e. taking an Uber or Lyft.

As we realize our success in decreasing parking demand while making Santa Monica an even more vibrant hub of social and economic life with investments in people-centered infrastructure, we can create a virtuous circle, continuing to free up ever more space for improving quality of life, supporting safe and equitable mobility, and building on and on in a virtuous cycle.

If you think now is a good time to reallocate some excess parking spaces to create a more livable city, consider sending a note to City Council to show your support for a more sustainable downtown and coming to the City Council meeting on the evening of November 12th.

Carter Rubin is an urban planner who lives and works in Santa Monica as a sustainable transportation advocate. Dustin Herrmann is an urban data scientist currently in the middle of a move from Covington, Kentucky to Santa Monica. 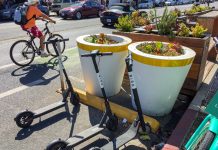