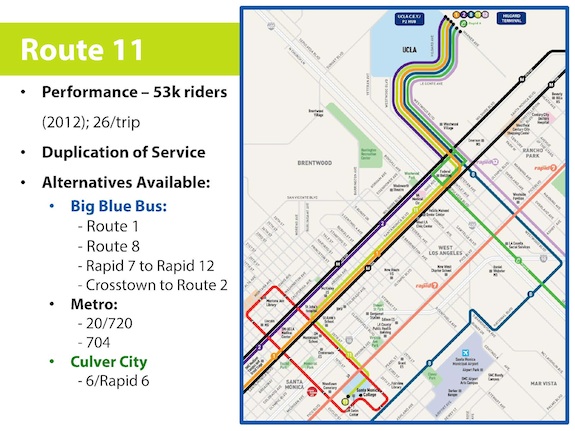 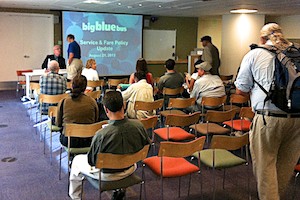 Wednesday night, Big Blue Bus held a public meeting at the Main Branch Library to discuss service changes primarily to take place in 2014 and new fare box systems that are coming in 2014. Staff also mentioned the need for further input for longer-term changes, including aligning service around the Expo Line in early 2016. The meeting also became an opportunity for members of the public to give feedback on service issues in general on the BBB, at times both venting frustrations as well as appreciation for the bus system and its operators.

On the budget front, Big Blue Bus is looking to increase fare recovery without changing the base fare cost by reducing fare evasion, and no longer issuing local transfer. These changes will need approval by the Santa Monica City Council.

Ed King, Director of Transit Services, explained that current fare-box recovery for BBB is 23%, and only 5% of rides are from transfer tickets as payment. There were audible grumblings and later comments by people who do make use of the transfers that were upset with the proposal.

Future service changes include completely dropping the #11 which again city council approval. It is targeted as both having  very low ridership, and being duplicative with other service options between SMC and UCLA. The Sunset 44 is also going to be detoured as of August 25th to skip part of the route serving the currently under reconstruction satellite SMC media campus. The agency will ask the council to make the Sunset 44 change permanent until the construction is completed that would bring ridership on the northern part of its route back up.

About the fare boxes, new models are to be rolled out in 2014, and which will have a greater range of capabilities, including smart card use (that will have TAP capability, though apparently coming soon after the initial roll out), as well as more modern functionality including accepting fares from cell phones.

King explained the agency did not want to invest in the first wave of TAP systems Metro rolled out because they were considered dated by the agency, and they wanted to invest in something more future looking without needing another replacement so soon down the road. An app with real time data for BBB is still perpetually coming soon.

Santa Monica will be issuing it’s own smart card independently of Metro’s TAP. This sounds somewhat needlessly duplicative to me, but apparently there is a certain amount of control and immediate financial feedback that is lost to a local agency on TAP. BBB will be encouraging it’s own card and cellphone fares, although it will be supporting TAP transaction functionality pending a process that I’m sure is probably more complicated than it needs to be.

So regional fare integration, sort of happening, but not smoothly nor quickly, and various card types will still be floating around even if hopefully TAP eventually works on all of the fare boxes in the region.

Bus systems are already serving tens of thousands in Santa Monica daily, and they have an important role to play in making a transition toward being a lower carbon, more energy efficient, and less car centric society. However they are tied up in trying to compete with subsidies for driving and car storage, and stuck in traffic not of their own doing, which requires more buses to provide consistent (sometimes) service headways. Elected leaders at all levels of government that allocate funding often under appreciate the economic value of bus systems, or they fixate on approving capital spending for shiny new buses and neglect operating needs. 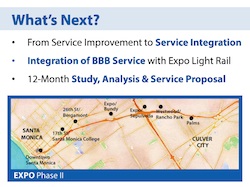 Bus agency efforts to squeeze out service improvements generally rely on trying to slice their constrained pie a little differently, but what we really need is the political will to create a bigger pie for transit service. Additionally, some of the biggest efficiency improvements that could cut costs deal with getting cars out of the way, not the little tweaks here and there to try and mitigate just on the bus service side.

At Santa Monica Next we’ll be keeping an eye on what’s going on with local transit service, but we’ll also explore potential paths by which we could grow the pie for local transit, and reduce system inefficiencies that are created by traffic congestion on bus routes. There are also possible funding mechanisms towards these aims that don’t rely on fare box increases, such as allocating money that comes in under AB 32, our state climate mitigation legislation and carbon market. Transportation system changes need to be among the top priorities of AB 32 allocation given the dominate contribution of transportation to California green house gas emissions.

We need to get beyond just talking about shuffling chairs around for a fixed level of service hours, and start changing the game.  If you have some ideas on improving transit service and perhaps most importantly, how to make it happen, I’d love to hear them in the comments.

Fall service changes that were already decided are also about to go in effect on August 25th, which includes trimming a few early buses on some lines, and increased service on a few others. Read more details of all the changes about to take effect on the BBB website here.