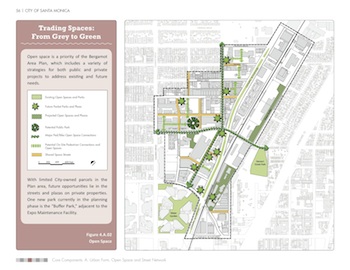 This next coming Tuesday, the Bergamot Area Plan is going to the city council for possible adoption. The Bergamot Area Plan, is one of the key pieces of the Land Use and Circulation Element (LUCE) general plan. The plan scope area is at the heart of the arts and commercial office centers of the eastern end of the city, and which is soon to have train service again in a few years.

No other part of the city is slated for as much possible change as the Bergamot Area, which has at it’s middle  a large abandoned factory at the former Papermate site, along with a number of large surface parking lots that could feature other possible land uses. There are internal parking lot access roads today, that could eventually become new street connections with the subdividing of large “super blocks” such as the Papermate site.

Part of the balance act in passing the LUCE was that new development would be concentrated in the Expo Line corridor to preserve the scale of the historically low rise residential zones of Santa Monica, and to mitigate against the possibility of associated car trip growth. A number of other policies and TDM (transit demand management) strategies are to be employed to keep to the LUCE goal of “no new net trips”.

The public process for this plan, including meeting workshops in the area, has been ongoing for more than a year now, and if you are just getting clued into this now, it’s a lot to take in. I wrote a post about the earlier draft concepts for the plan in May of last year for Streetsblog Los Angeles here, and the staff report (& supplemental report with additional Q&A) for Tuesday’s meeting has a pretty good summary of the gist, as well as links to all the attachments for the full documents.

The lackluster way the immediate environments around many existing Metro rail stations orient to the rail service, or poorly create an inviting pedestrian jumping off point, can be disappointing. My  hope is Santa Monica’s proactive approach to set many of its planning priorities, from bike and pedestrian facilities to land use, around the rail system in advance, will see an early outcome that can become a model for the region as we continue the transition into the post automobile growth era.