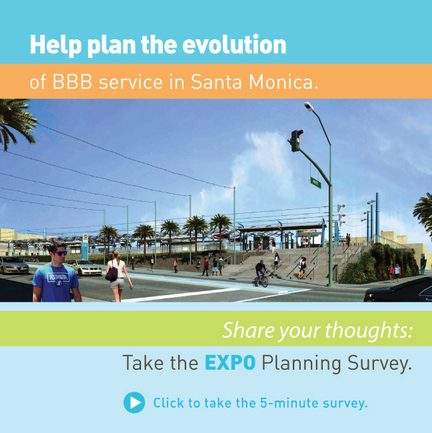 Yesterday, we warned you that change is coming to Santa Monica. The good news is, it appears that the city’s transit agency is readying itself for that change.

The Big Blue Bus has long been the face of transit in Santa Monica, but with the coming of the Expo Line in 2015 that could change. The Expo Line will have three stations in city borders, including Bergamont Station, and two on Colorado Boulevard at 4th and 17th. The Big Blue Bus is in the early phases of planning on how its bus routing will change to accommodate and support Expo’s arrival.

One of the first steps is soliciting feedback from the community through an online survey. While I don’t live in Santa Monica, there is literally a Big Blue Bus stop right out side my front gate. If for some reason the Big Blue Bus pulled its route along National Boulevard, it would have a huge impact on my community. Many UCLA grad students live in my piece of Mar Vista and rely on the Big Blue Bus to get to campus.

In other words, I definitely feel as though I’m a stakeholder and want to share my opinion.

For now, the transit agency isn’t talking about specifics in its survey. The questions are more general asking whether the participant favors bus-only lanes during peak periods, if BBB has to contract should it do so on the basis of ridership or consider different factors and what kind of large items (bikes, strollers, suitcases) does the participant take onto buses and rail.

The survey took about five minutes to fill out. If you ride the BBB or care about the agency’s future directions, it’s worth your time to help them make their future plans.

The only question that was difficult to figure out was one asking me what my “monthly transit budget” was. I’m guessing the survey creator wants to know how much I spend on transportation, but the question could use some clarity. In a Streetsblog article several years ago, Tanya Snynder explained how many people think of their transportation budget in terms of fares and gas purchased and not in terms of insurance, repairs, car loans and all of the other factors that show the real cost of people’s commuting choices.