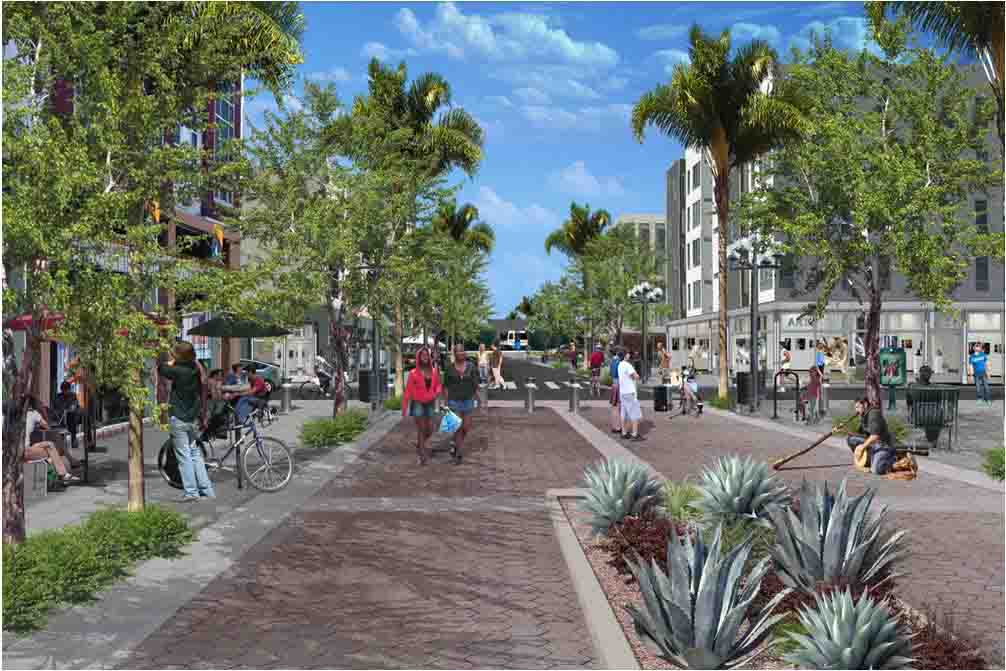 Compared to other “specific plans,” such as the 1993 Civic Center Specific Plan, or the Downtown Specific Plan (DSP) currently being drafted, the Bergamot Area Plan (BAP), in the more than two years it has been in development, has not been controversial.

There are various reasons for this. One is that, in contrast to the DSP, the parameters for the BAP were included in the new land use and circulation elements of the general plan that City Council passed in 2010 (the LUCE). It also helps that those parameters make sense when it comes to converting an industrial district into a multifunction neighborhood surrounding a light rail stop located at a major cultural center (the Bergamot Station complex of art galleries). The BAP calls for breaking up super blocks with pedestrian- and bike-friendly streets and pathways and allows for moderate amounts of development.

Nonetheless, at the end of the day there are always issues, and when the City Council debates the BAP Tuesday evening, the council members will need to resolve certain matters. These aren’t challenges to the fundamental direction of the BAP, but they have to do with how the plan handles certain specific and important issues.

The issue that will likely engage council members most will be how to generate more affordable housing for people who work or will work in the Bergamot area. The council previously requested that planning staff study how to increase the affordability of housing to be built under the BAP. Staff responded with a report that largely defends the approach taken in the draft plan, which uses the standards in the city’s Affordable Housing Production Program (AHPP) for low-income housing, and other incentives, specifically development bonuses, to encourage developers to build workforce housing for households with incomes higher than AHPP levels but lower than the income levels needed to pay market rate rents in Santa Monica.

The council will likely want to see strategies for negotiating more affordability from developers. This is a good idea. The city is in a good position in these negotiations because the market to build housing in the region is profitable and stronger than the market to build offices.

There is also a value to building market rate housing, which after all is housing that is also needed for people who work here. It’s one thing to talk about “market rate rents,” but if no one can build market-rate units, there isn’t a market for those units. If the higher end of the housing market can’t find housing, then that puts pressure on rents on existing units that might otherwise be affordable. This demand causes increases in rents throughout the city, but especially in neighborhoods near Santa Monica’s office parks, such as the Pico Neighborhood, the college streets, and Wilshire/Montana.

The council has the difficult task of finding the “sweet spot” that gives staff the power to negotiate for the highest levels of affordability, without at the same time preventing the building of housing.

Unfortunately, when the Council adopted the LUCE, it voted to limit housing to 50% or less of new development in the areas the BAP covers. Given that there are already so many jobs in the area and so little housing a better policy would have been to limit any increase in development standards above the existing commercial zoning to residential development. While the council is unlikely to amend the LUCE when passing the BAP, it might be a suitable moment to note that there’s nothing stopping a future developer who wants to build more housing to request a text amendment to the LUCE (and/or the BAP), much as the council said that downtown developers who wish to build higher than the height ultimately permitted under the DSP could ask for an amendment.

Related to this housing question is an aspect of the BAP that I can’t figure out, namely that it applies the lowest development standards in the district to the Bergamot Station area itself, i.e., the area that immediately surrounds the light rail stop on the south. The draft BAP had limited development in the whole area (which includes the area with the galleries, most of which the city owns, and two privately owned parcels on Michigan Avenue) to an FAR of 1.0. Furthermore, the BAP prohibits housing on both the city-owned and privately-owned parcels.

After pleas by Wayne Blank, who developed and operates the gallery center under lease from the city and who owns one of the Michigan Avenue parcels, the Planning Commission recommended increasing the FAR on the private parcels to 1.5. (In the rest of the BAP coverage area, maximum FARs range from 2.2 to 2.5.)

The BAP expresses the view that these low FARs protect the galleries, but I don’t see that. The BAP also calls for various enhancements to the area, including a structure for shared parking, and I wonder whether these can be paid for with the limited development allowed. (Although in a few weeks the city will receive proposals from Blank and other prospective developers of the city-owned property, and maybe I’m wrong.) We should protect the galleries by requiring that new development provide the same amount of square footage for galleries, at reduced rents, but the land nearest the station is not where we should have the lowest densities.

In the meantime, it is a waste of an opportunity to not include housing development in these areas nearest the Expo stop. In particular, the area on Michigan and near the galleries is a good location to encourage the building of student housing, given its proximity to Santa Monica College and the arts, culture and entertainment uses being developed in the area. Enrollment in the college, particularly from students outside the area, has increased over the past decades, but there never has been a strategy at the city level to develop housing for students.

Another issue that will come up Tuesday night is whether the BAP provides for parks and open space. The Recreation and Parks Commission, and some planning commissioners, argued that the plan did not do enough to secure parks, but I don’t agree. The plan has an excellent open space strategy, but one needs keep in mind that it is a plan and only a plan. What we’re dealing here with is private property, and until the owners of relevant properties want to develop, or until the city has money to buy property for parks, decisions to build parks have to wait.

At the present time the city already owns property that it has promised to turn into parks (Fisher Lumber and the Civic Auditorium parking lot). The issue is the money to build and operate the parks. In that context, the BAP articulates a good parks and open space strategy.