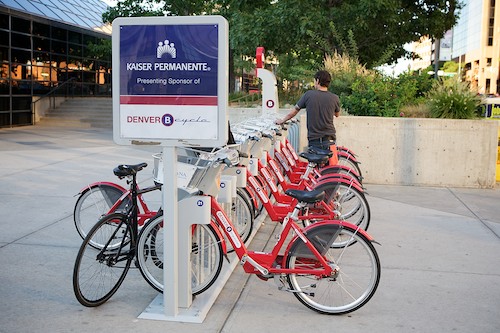 With how busy this weekend has been with the Pop-Up MANGo event, the Streetsblog Los Angeles and Santa Monica Next fundraising event, I didn’t get a chance to put together a lengthy analysis of the bike share system proposals for Santa Monica in the new staff report added to this week’s council agenda over the weekend. However I do want to call attention to this item (8-A) in advance of the meeting in case anyone wants to check out the report and offer feedback to the council before they discuss the latest details, either in person at city hall or by the council e-mail. Much of the staff report (pdf), and economic analysis by transportation consultancy firm Fehr & Peers is written before CitiBike went live in New York City, but the report itself is a great comparative snap shot of bike share systems in the U.S., and the details of their varying operation and funding models.

The Lookout News also has a story up this week on the bike share item for some additional context on the agenda item.

A few highlights found in the report (pdf) :

●   25-35 stations proposed initially, with grant funding secured for the city to pay for the capital costs. Much of this grant funding has strings attached to having an operator selected by this December, but the city is seeking an extension. If the city goes with buying the equipment itself, it would retain more control of the system and station placement than what I’ve seen pitched by the fully private model Bike Nation has pitched in city of L.A.

●   5 of the initial stations are considered outside of the municipal border of Santa Monica pending mutual agreement with the city of Los Angeles. That means Santa Monica could be placing stations in Venice Beach or West L.A. to facilitate common cross border trips.

●   In order to keep the system price accessible, the fare structure would be subsidized, and the 3 primary funding models to consider are title sponsorship, advertising to be managed like Big Blue Bus panels are now, or go a route of subsidizing with city funds or other secured revenue sources that could allow the system to operate without the advertising and sponsorship models employed in many U.S. bike share systems.

●  If the city goes the ad and or sponsorship route, the city would have to amend it’s laws on outdoor fixed advertising, as the city has kept tight regulations on advertising and signage. The subsidizing without ad revenue route could allow the city to keep ad creep at bay.

●  Regional coordination and compatibility is a high priority, and the city has been in talks with Metro and other regional governments on this issue. Given the parallel efforts and the surprise announcement that was made from Bike Nation, the prospect of ending up with weird regional incompatibility issues has become an important issue to mitigate. City staff have advised that clauses in agreements to ensure compatibility with a potential operator, or that the city and other regional cities adopt the same operator.

I thought the Bike Nation announcement back in April of 2012 meant the city of L.A. was about to set the standard for the L.A. region, but it’s entirely possible Santa Monica may plant bike stations in the ground first. We’ll see how it goes, and what the Santa Monica council thinks, but whatever the outcome, whether it ends up being Bike Nation bikes or not, regional compatibility is essential for L.A. county when we have 88 different municipalities that all blend into each other.

My initial take is that I definitely support the direction of city owned equipment over a fully privately funded model. I would like to see station placement investment choices made by city priorities and public accountability. I don’t want to see pockets of the city neglected as the system develops, not because the bikes wouldn’t be used, but because an area might not meet the ad revenue maximization or demographics an operator privately funding bikes might be looking for.