Home Uncategorized The Petroleum Around Us 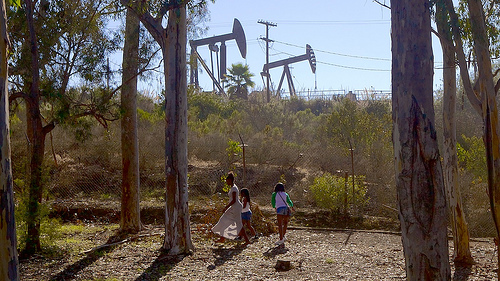 In considering the frequently invoked environmentalist mantra, “think globally, act locally”, I’ve come to think of it as a phrase with a missing middle, that could benefit from also thinking and acting regionally.

In Santa Monica our big immediate local environmental health issues relate to water, (both the sea, and filtering our ground water, contaminated many years ago by a gas station leak) and air quality near the freeway.  Despite our sustainability aspirations, goals, and many local green seminars, our city pumps gasoline, drives a lot, and encourages others to drive here.

Our municipality’s local economy is inherently and deeply connected to the oil industry. An industry that is not just off in some far away lands, but embedded in the fabric of our regional history, our present and foreseeable future. We are all part of the oil industry and it’s impacts, near and far.

The oil industry at every step of the process, from extraction at well sites, to refining, to distribution and burning for fuel or making into products, all happens at some level locally within the region. Although we now burn and use more than we can extract regionally, and depend on imports that ship into the Port of Los Angeles from abroad.

When people think, “buy local”, they usually think locally grown tomatoes that didn’t come from out of state, not locally sourced and refined petrochemicals. It’s not a part of local we generally to want to dwell on or think about, but we presently depend deeply on that side of our local economy for nearly everything else we are doing. The price of gasoline would certainly be higher without the oil sourced locally.

In my own research and writing I’ve become concerned and alarmed by the prospect of oil depleting (non-renewable reserves aren’t forever) as well as the consequences of unmitigated burning of fossil fuels such as green house gas emissions. However, I found I was thinking of this all in a very abstract way. Looking at charts and figures tracking national trends, or considering how long shale fracking oil flow rates can continue or grow in North Dakota given faster well decline rates than conventional wells.

In the process of being concerned about oil, I was mostly overlooking the oil extraction and refining that is happening so close to home that I can bike to it from my front door.

So this week I did exactly that, I biked from my apartment in Santa Monica to wander around the perimeter of the Inglewood Oil Field, the largest contiguous urban oil field in the United States. It’s a place I’ve caught glimpses of going through before, but hadn’t spent much time around.

I’ve been reading about it a lot more lately, Sahra Sulaiman who writes for our partner site Streetsblog Los Angeles, has been discussing the field in her coverage of South L.A. for a while now, and KCET kicked off a new series, “The Well Next Door“, by talking about the controversies at the Inglewood oil field. The renewed focus on the field deals with the health and safety debate over hydraulic fracturing, or fracking as it is often called. This recent video also does a pretty good job of visually explaining what fracking is for the uninitiated, which can be used to both release deep shale trapped gas and petroleum.

This field sits on “tight oil” shale deposits formally considered to costly to extract oil from, but are more economically viable with the rising price of oil in recent years, and testing of hydraulic fracturing has already been conducted at the site. The newest owner of the site, Freeport-McMoRan Copper & Gold Inc., purchased the field and it’s former operator PXP, for 16.3 billion dollars, and apparently has a reputation for short changing human and ecological concern in the pursuit of it’s mining operations overseas.

For starters, I wanted to just go out and look and see what I could see of the place. Which also turned out to be more difficult than I realized with extensive barbed wire (a lot of it rusty and gross looking) fencing keeping a lot of distance between the public and the majority of the active oil extracting pumpjacks. I did get some pictures, but the field is so massive, and difficult to navigate around, the photographer in me really wants to go back again soon in search of other vantage points.

I really recommend checking out the first two posts of the series on KCET “The Well Next Door“. And if you really want to see an oil well next door, check out this pumpjack in Torrance embedded below, that I found while browsing the state database system that tracks active and historic oil wells. Certainly not the kind of sidewalk obstruction I’m used to seeing.