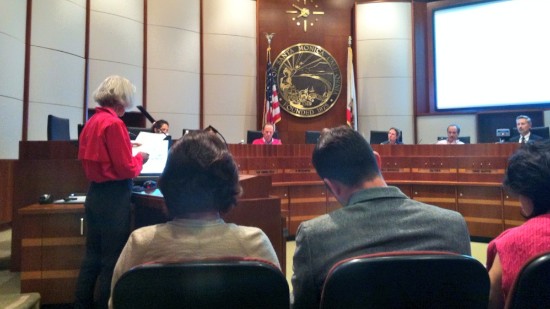 Currently, three different primary design directions are proposed, and for now have been presented somewhat as separate concepts (although I think parts of all 3 may be useful for different contexts along the scope area). These concepts revolved around what I call neighborhood scale roundabouts (called traffic circles in the presentation), what planners have called “slow speed intersections” (features from the recent Longfellow St. redo that I wrote on last year were used as examples), and a cycle-track or protected bikeway facility. There are also treatments that might accompany any of these concepts to further calm traffic or reduce traffic volume such as chicanes to add curves to the path of travel, or diverters that allow bike travel through but force or block turn movements from motorized vehicles.

At the community meeting on Thursday, attendance was disappointingly light compared with the widely attended first workshop. Most people present supported the plans and ideas, but it also wasn’t enough of a crowd to gauge how the larger community might feel. Hopefully, the much more advertised (the event will soon have door hangers all over the neighborhood) and bigger onsite workshop coming up on the 21st of September will be more broadly attended to get a variety of feedback.

In the planning commission discussion Wednesday, I was somewhat surprised to find nearly unanimous sentiment among commissioners for the cycle track approach, despite the political and logistical difficulties this would raise for parking. The current width of Michigan Ave. is such that a lane of parking would have to be removed to make a separated bikeway wide enough for two way travel, at least according to staff and project consultants from the firm Meléndrez, and in the pitches I’ve listened in on so far on the project.

This cycle track scenario is one I can easily envision presenting a potentially serious challenge to developing local buy in. A loss of that much parking is likely a political non-starter for many car owning residents. Some of the housing stock in the area was developed before extensive off street parking was dictated to every unit. While I think there is support for improving the corridor for active transportation and other features, and more Pico Neighborhood households do not own private vehicles than other neighborhoods, the majority own cars. Many of those households are deeply apprehensive about losing curb parking spaces in an area also impacted by SMC parking spill over.

The parking impact could be mitigated against, at least to an extent that we don’t have numbers for yet, using an approach similar to the lane of parking removed from Colorado to make room for the Expo Line, by adding diagonal or perpendicular parking to wide side streets that do not already have such parking alignments. One of the peculiar things about Santa Monica’s street grid, is we have many north/south streets that are much wider than is ever utilized. That is in part because some of these streets were designed with more vehicular traffic in mind before they were dead ended in the middle by the freeway, which funneled traffic to the limited streets with bridges.

And about parking permits, the current system is based on distances of block faces from the permitted address, so shifting some parking from Michigan to side streets with sufficient space, could for certain households potentially create complications in finding a space within the permit range for their address. If the cycle track move forward as a preferred option, these details of parking management minutia would need to be carefully thought through and accommodated, and clearly communicated to residents who could be impacted.

At this conceptual stage of considering various possible approaches, detailed analysis of parking has not been conducted, but the planning commission asked that staff prepare such analysis for the possibility of cycle track before their next meeting. If it turns out that a net loss of parking would be significant, I fear trying to move forward on the cycle track proposal has the potential for a backlash on parking that could drag down  progress in the corridor. For a project such as this, through a completely residential area, neighborhood buy in is critical.

Planning commissioner Richard McKinnon invoked bikeways such as the “Wiggle” in San Francisco to talk about fast paint and wayfinding that could go down quickly in advance of more permanent infrastructure options such as the cycle-track. He urged a simultaneous go fast approach while other priorities take longer to process.

About doing a cycle track I have some mixed feelings personally. On the one hand, it’s great, dedicated and physically separate bike infrastructure, and it is something many have asked for. I’m glad to see support lining up for the idea from the planning commission. But cycle tracks also create their own technical challenges, such as managing intersections, alleys and driveways (though Michigan has fewer drive ways than most residential streets), especially with 2 way bike traffic. Managing intersections well with such a facility would be vital. The parking debate over doing something that could potentially displace or lose many spaces in a residential area is not one I would look forward to dealing with.

I also have come to think of greater degree of physical separation as something that needs to scale with speed differential and traffic volumes, and as also a much easier sell to the public on wider streets, where they also tend to be most needed to deal with intensity. Streets already featuring bike lane space allocated going both directions only by paint today are also typically corridors that might be good candidates for cycle-tracks.

In the case of Michigan, a purely residential and school connecting context, traffic volumes are lower than many east/west corridors, already making it a popular alternative to beasts like Pico Blvd. & Olympic Blvd. But to make the comfort really work, Santa Monica should be aiming to cut volumes further, especially during the school rush peaks.

Most importantly, the city must put a stop to speeding cut through trips by drivers taking advantage of the street width and few intersections regulated for traffic moving east/west. If the city can reduce speeds and lower non-immediate resident volumes, than the sense of imperative for separated space to foster an environment comfortable for biking, even for more risk adverse riders or potential riders, may not be needed.

Where Santa Monica employed traffic calming elsewhere in the city in the past is of a half committed variety reflective of the politics of the time. However if we want this concept to work, and work in a manner where anyone would feel comfortable riding in the roadways, I think it can be done without the cycle track, but it will require a lot of care and variety of tools to tame the automobiles to a more human sensibility in the setting we create. The lack of a successful local precedent for truly tame shared space and a concern to really move forward with bike safety and comfort, is likely behind the commission response.

Although as I consider the importance of subjective safety to both ridership and shaping safety outcomes, cycle-tracks may worth trying here to serve the school, and perhaps that may be the only way to get some parents on board with allowing more bike riding locally. If the cycle-track is the direction things start going in, and parking can be managed satisfactorily to keep up support for the project to move forward, then the we need to very carefully consider how we deal with the interface of that facility with intersections, alleys and driveways to ensure maximum visibility.  We would also need to also employ means to compel more cautious speeds and attention for movements across the path, perhaps with slight grade change or texture in crossing the bikeway, which if we incorporate with diverters to reduce cut through traffic, would hopefully be an infrequent occurrence to even deal with.

Hopefully we get some good turn out on the 21st for more public feedback, and I’ll be keeping a close eye on any developments or input shared for the plan, as well as formulating some more ideas of my own for potential implementation. Having spent so much time living in or directly adjacent the scope area of the project, I definitely want to make sure we get this right, and that the completed vision will be something the neighborhood will take great pride in for years to come.