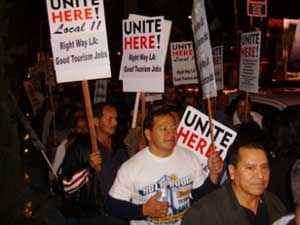 Earlier this month, UNITE HERE Local 11, a non-profit representing hotel workers, struck a deal with a South Carolina’s OTO Development that will allow staff at two new mid-priced hotels to organize a union once construction is completed. In return, UNITE agreed to stop testifying against the projects as they move through the approval process.

New hotels and other developments are big news in Santa Monica, and one of the issues we discuss here on Santa Monica Next. Usually, we’re discussing traffic impacts, mitigation standards and other ways the development will impact the built environment. There is also an undeniable impact on the economy whenever a new hotel is built for the hotel owners, surrounding shops and restaurants, and, of course, the workers at the hotel itself.

Tonight, the Santa Monica Democratic Club, long an activist proponent for a living wage, presents an update and discussion led by Rachel Torres, Political Director of Unite/H.E.R.E. (Hotel and Restaurant Employees), on the development agreements now under consideration and the union negotiations taking place with the developers.

While California recently increased the minimum wage to $10 an hour, the Living Wage for a family of three in California is calculated at $21.62. A household with two parents working full-time falls just short of that threshold, unless there are some healthcare benefits included.

As Santa Monica continues to debate ways that the city can make itself a more attractive place to cities and families while reducing its own carbon footprint; a tourism and entertainment industry that pays fair wages to its employees so they can live in the city where they work would seem to be a lynchpin of that effort.

What: Discussion on the development agreements now under consideration and the union negotiations taking place labor and the developers of new hotels.