I’m returned to Santa Monica this week from attending the California by Bike Summit in Oakland, with the theme of mainstreaming the bike in California, and a few extra days in the Bay Area and San Francisco as well. There were numerous sessions and discussions with valuable lessons that will inform my writing, but I thought I would start with reflecting on the experience on day one, attending the optional bike tour of Davis California by way of the Amtrak Capital Corridor from Oakland. The tour was led by local advocates Steve and Emily Tracy of Davis Bicycles!. 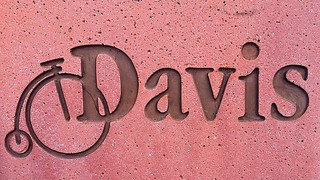 Lore of Davis is impossible to not come across in the writing on American bicycling, but until this trip I had not experienced the only city distinguished with a platinum bicycling friendly community award by the League of American Bicycling. After a bit of a let down in the gap between the cycling paradise mythology of platinum rated Portland Oregon and the more moderate reality of being better than most everywhere else, I wasn’t quite sure what to expect. Davis did not disappoint in providing miles of seamless and continuous idyllic cycling that ties the small city together (the scale makes the task of a bike network a bit easier). While not perfect, it did exceed my expectations in several regards.

One of the things that struck me most of all about Davis though was the high bicycling mode share in the context of what is a fairly low density, low to mid-rise urban environment. Apart from the network of dedicated bike paths and a few other subtle differences, Davis is predominately the sort of land use pattern most often associated with a near monolithic dependency and orientation around driving in much of the U.S.

Some of this can be attributed to Davis being a college town, but not all college towns have fostered a culture of cycling around them quite like Davis, nor do I think we can’t learn from or apply lessons from such a context to other environments, like suburban office parks.

The orientation to relaxed and comfortable cycling also reaches every level of education, and every part of the city, with nearly every school for every range of grades, connected by a loop of high quality class 1 cycle path facilities. The long standing commitment to safe routes to school was both exciting to behold, but also frustrating in light of how lacking progress has been on creating comfortable spaces to ride to school in most of the state and the country, including the debates here in Santa Monica.

Unless you happen to live close to the commercial district in Davis, it, like many suburban places (and I’m self aware what is “suburban” has a fair amount of ambiguity to it), it is not particularly walkable, because of the distances involved. However what would be an inconvenient or laborious walk, is quickly shrunk down to doable in a timely fashion with a bike. This circumstance, albeit the variety of contexts carries widely, exists in many car dominated places, so I find it noteworthy the different direction Davis has taken. 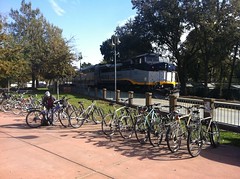 The first thing that I noticed about Davis right away, was that the quantity of bike racks at the Davis Amtrak station dwarfs what is provided by many cities many times more populous. Along with the bike racks in several locations at every side and approach to the station, the parking lot also featured a bike repair stand with tools and an air pump for public use, features I don’t recall seeing at any other Amtrak station in my various travels across the country by train. The bike amenities and racks at the station are also well utilized, and I got the impression from the locals organizing the tour that there were plans for adding more. 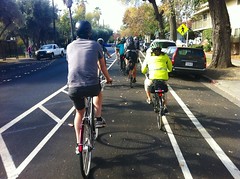 The UC Davis Campus itself was certainly the epicenter of local cycling in sheer numbers of people riding, and the prolific rows of bike parking near every building, recalling images I’ve seen from Northern Europe. Bicycling and bike racks are certainly not uncommon sights for college and university campuses, but the sheer scale of cycling at Davis dwarfs anywhere else I’ve seen, including more populated institutions like USC. The campus features many bike only paths, and narrow roads that are blocked from all but campus delivery or maintenance vehicle access, at points connecting at high volume bike traffic intersections that were efficiently and smoothly regulated by roundabouts.

Although the off street class 1 paths are what are most distinguishing in Davis, many streets have bike lanes, including a street that was one of the first to get a painted lane for cycling. Many years ago, Davis also had early American cycle tracks, but the initial design was problematic, and they were removed. Some have cited this to suggest cycle tracks are inherently flawed, but Davis is again experimenting with new cycle track designs; both as a tool primarily to bridge gaps for connecting between off street cycle path facilities, to create more continuous low stress route options.

The many instances of grade separation to remove crossing “busy” streets was also notable, given the investment commitment it takes to create such facilities. In some cases facilities were planned for and created many years ago  before much of anything connected to these underpasses. Now they are  essential links.

Some of these were a tad narrower than they probably ought to be, but the foresight that went into making them is remarkable, and a few are slated for widening under a range of more recent efforts to take Davis to the next level. Already rated platinum by the League of American Bicyclists, with a mode share in the ball park of 20%, a new bike plan in the works is aiming for 30%, and for the new diamond recognition the league has created, but not yet awarded.

Davis also features the closest to what one might call bicycling oriented development, with housing that was developed with bike paths that cut through. There is a brand new development on UC campus owned property for students and faculty (addressing needs for housing affordability near campus) that orients around central bikepaths that connect to the broader path network. The West Village development structures are also designed for both energy efficiency and energy production, with vast roof top solar PV arrays, and solar panel shaded parking lots (yes even Davis has lots of car parking, and in many places, at least during our visit, it felt under utilized or overbuilt).

It did feel a bit sterile, as most brand new and not yet lived in developments are, but the effort to tightly integrate bicycling and energy efficiency  puts in perspective how trivial and tokenistic many gestures toward sustainable development are in most places. My main criticisms would be it appeared to still have too much car parking, and the streets built to the west of the development are overbuilt and encourage speeding by what little car traffic drives through. 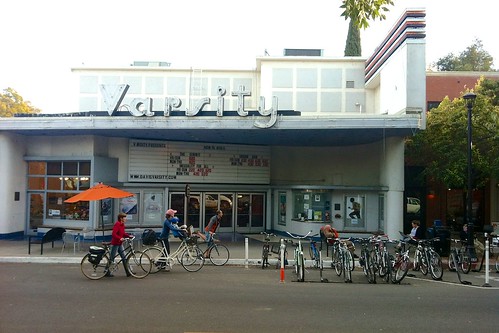 The central business district downtown had fewer bikeway facilities than I might have thought, but the frequent 4 way stops and narrow streets kept speeds slow. In that context, sharrows seemed to work fine for most people, and a few bike lanes cut through the center as well. Bike parking was abundant all around, including some on-street corrals. The indie movie theater in town had a prominent bike corral out front, not unlike the Nuart theater on Santa Monica Blvd once had.

What bit of history I know of Davis comes from Jeff Mapes Pedaling Revolution. The book highlights the early push for cycling in Davis, and also the years of stagnation, and decline, that settled in as well. When the league awarded Davis the platinum, it was more for what it had in place than anything it was doing at the time. Talking with locals from the group Davis Bicycles! and seeing recent additions, it sounds like a second wave has been in the works that started with a wake up call about 8 years ago when a thesis presentation at UC Davis charting the rise and fall of cycling rates and stagnation of new developments for cycling, snapped a lot of people out of a complacency that had settled in.

There is still work to be done, it’s not a perfect bicycling utopia, and there familiar trappings of suburban automobile orientation in parts. But there is evidence all around that real thought and care has been given to facilitating living life by bike and without dependency on a car to meet one’s needs.

Spending a day in Davis answered a lot of questions I had about the place, but the experience left me wondering about many questions I hadn’t previously thought to consider, and with not quite enough time before the train back to Oakland to get those answers. In Davis we have a unique example of American bicycling culture that comes closer to mainstreaming cycling than any place I’ve experienced in the U.S., including the two other platinum cities of Portland, OR and Boulder, CO.

There aspects of Davis and it’s context which are unique, sprawl contained by protected farmland, and anchored by a major university, but it shares many characteristics with suburbs and towns across the state of California and country as well. If we are to adapt to the energy and climate challenges of the 21st century, there are many applicable lessons from Davis worth examination, replicating and tweaking upon.