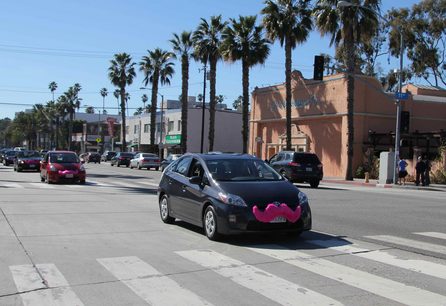 Last week, I had the chance to interview Juan Matute, a transportation researcher with the UCLA Luskin Center, Santa Monica resident, and Chair of the Southern California Streets Initiative’s Board of Directors. (SCSI publishes Streetsblog Los Angeles and Santa Monica Next.) The topic was ride sharing and the major companies that are operating in Los Angeles, Lyft, Sidecar and Uber. 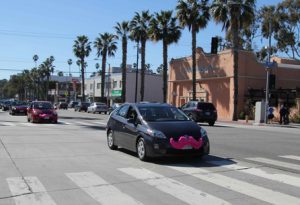 The full interview, which includes a lengthy presentation by Matute, is available above. He also did a lengthy Question and Answer Session with readers which I’ve transcribed below.

Ride share, and the fate of the companies operating in the Southland is as big an issue in Santa Monica as it is Los Angeles, so we thought we would share the discussion with any Next readers who missed it last week. All of the Q and A can be found at this link, previewing the interview.

Question: Do you anticipate that, as some customers begin relying on real-time ridesharing as a form of transportation, they will also begin or increase their patronage of so-called traditional cabs?

Answer: If an experience in a cab is bad, people avoid cabs as a recourse. If an experience in a TNC is bad, people rate the driver low and are never matched with that person again. Taxis will likely have to re-focus on customer service and two-way communications with customers (e.g. twitter complaints) in order to capture the increase in demand for Taxi/TNC services that I would expect in the future.

Followup: It’s interesting that you say all of this. In my experience (so sample size = 1), I have begun using cabs again, when I can’t arrange a TNC. I haven’t had a single decent cab experience (sample size 4) since Lyft began operating in LA. The idiocy on my part is that I keep using cabs despite the my dissatisfaction with them.

Answer: I was in the cab on one of those occasions. The driver chided us for taking a cab 14 blocks.

Question: Give these “Transportation Network Companies” an honest name for Christ’s sake! They are eGypsy Cabs as in electronic gypsy cabs. Just because you have a smart phone app doesn’t mean you are an upstanding citizen. We license cabs to prevent robbery, kidnap, and body lice – and Uber and Lyft should have to deal with these things just like any other private person hiring their car out.

Answer: Josef, the state is trying to regulate the safety of these services, especially the insurance requirement (http://delaps1.cpuc.ca.gov/CPU… The CPUC was not sympathetic to the argument that the services should have to jump through extra hoops just because Taxis have to. Taxi regulations are suboptimal from any perspective – the path-dependent result of decades of layering on new requirements. I personally feel like I have more recourse for a bad ride with a TNC company than with a taxi company.

Follow-up: A TNC is a taxi company with an app is the point I am making, and a taxi company that is illegally lowering its costs by shortcuting local laws. If the CPUC is going to make eGypsy Cabs a special class of taxis I think that is grossly unfair. Taxi companies should be able to dodge regulations and become Lyft and Uber drivers (which is what will happen in the end anyway).

If a Lyft driver doesn’t perform routine maintenance, isn’t carrying enough insurance, and the car gets in a crash, who can a “customer” turn to for medical bills? If professional taxis have to face one set of regulations and gypsy cabs get another – how does this help the public? It only exposes us all to more risk and a shrinking market for people who take transportation for hire seriously enough to call it a job.

Answer: Some anecdotal evidence from San Francisco suggests that taxi drivers are becoming UberX or lyft drivers – and taking home more money than what they get after a medallion owner takes a cut. No research yet, but in a supply-constrained environment it’s the medallion owner rather than the driver who makes the bulk of the money. TNCs are required to have $1M in insurance that supersedes any personal insurance someone has on their vehicle.

Josef, do you think similarly about AirBNB versus hotels? That hotels should be compensated for the lower perceived/real risk associated with staying a night, and that AirBNB offerings should be made illegal?

Question: …what legal/regulatory requirements are drivers for TNCs subject to, and how do those requirements differ from those that apply to conventional taxicabs (in terms of vehicle safety, background checks, insurance, etc.)? What additional requirements do the companies themselves impose on drivers? Have there been problems in other cities due to TNCs supposedly being subject to less strict regulation than taxicabs?

Answer: Here’s a summary of the regulations that will apply to TNCs. I’ve heard that TNCs will kick drivers out of the system if they receive poor ratings (under 4.5 of 5) and if they fail to respond to too many ride requests).

Many state and local governments are considering injunctions or regulation. California & LA have not been unique, but the state has been the first to issue regulations. Look up DC and Uber for the most noteworthy battle between a city and Uber. 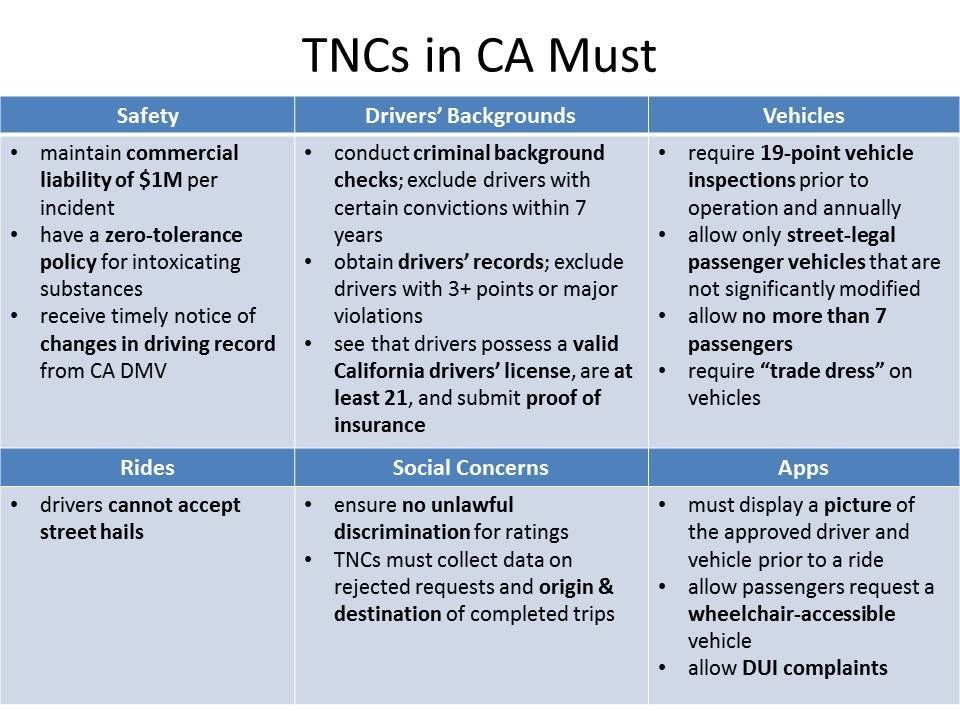 Question: Require “trade dress” on vehicles – is this saying that vehicles should be identifiable as operating on behalf of the TNC from the outside? Lyft has the mustache, and Uber cars tend to be black towncars with livery plates, but do Sidecar and UberX comply with that rule? Or am I misunderstanding it?

Answer: UberX cars and Sidecar cars must have trade dress. Uber livery cars are not TNCs. They’re regulated separately and those regulations will be updated now that it’s possible to contract for one without the use of a telephone. Previously, shutting down a telephone line was the primary means of stopping non-conforming charter party carriers. The CPUC has jurisdiction over telecommunications in the state, so shutting of phone lines was easy. The CPUC does not have regulatory capabilities over the internet, app stores, or other parts of the process needed to download an app, enter personal and payment information, and contract for transportation services.