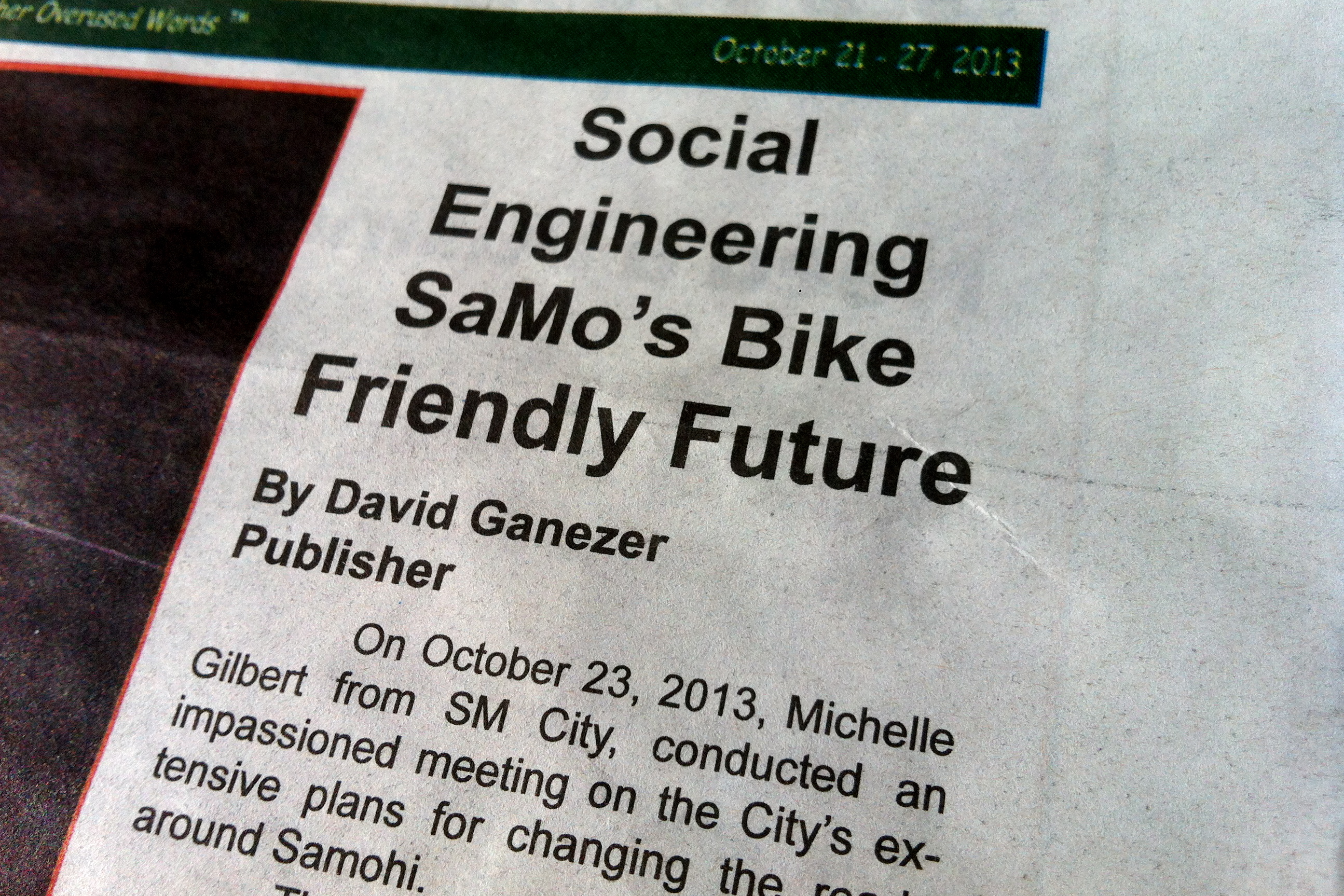 Last week was the latest workshop to discuss proposals for improving biking and walking access to the Santa Monica High School campus, for which the city has been awarded partial grant funding through the Safe Routes to School program. Diagrams were shown of potential bikeway and pedestrian crossing improvements, having been narrowed down from a broader range of prior considerations, and based on some of the feedback given in earlier workshops and meetings.

For walking and pedestrian improvements, new crossing striping, a new crossing, and intersection curb radii tightening and in some cases bulb-outs that shorten the crossing distance, and generally slow drivers making turns, are proposed.

For bicycling, new bike lanes on Michigan from Lincoln to 7th, turning into 7th to Pico Blvd., with one side (on the campus side) possibly being next to the curb with cars to the left, a cycle track type of facility. More unconventionally, the city proposes replacing the center traffic median for one block from 7th to 6th, to have a physically separated center bi-directional bikeway in the center of the street, closing the gap between 6th and 7th that currently breaks up the grid of bikeways at a particularly challenging stretch of roadway.

Generally speaking I have a number of reservations about center median bikeways, however in this specific context and limited length given 7th and 6th ending as T intersections into Pico, this could function succefully as a low stress way to deal with an otherwise high stress gap in the grid of bike routes. The concept makes use of existing space only used for plantings currently without the political hurdles of anything that might impact or realign existing traffic lanes on Pico Blvd.

I don’t know the make up of prior meetings concerning this project, but I got the impression the meeting on the 23rd featured a particularly tough crowd. Apparently in some earlier iteration, making the bikelanes on the east side of the campus physically separated in both directions was openly discussed, but would entail parking losses. No diagram or proposal involving parking loss was part of what was being proposed for consideration on the 23rd, but some who live directly adjacent the campus on those streets had come to make sure of that their parking would be preserved.

The other point of skeptism for some was that the short stretch of Michigan Ave. from Lincoln to 7th, and 7th out to Pico is proposed as one-way directional for car traffic in all the latest alternate designs under consideration, in part to make space for bike lanes in both directions while preserving head in parking.

Rather hyberolically, one parent commentated this would an hour to her drop off commute, which I found to be a dubious claim, especially given the new traffic light proposed for 7th and Pico would enable a left turn option exiting the street on the east side of the campus that doesn’t exist today. Further traffic analysis of the one way flow will be studied, but given the mess that exists with drop offs happening in both directions today, I can’t imagine it being worse, or if anything perhaps simplifying the complexity of the area in the morning and afternoon.

It wasn’t all nay saying by any means, there were some strong comments in support of the proposals, and some delight to finally see things come as far as they had after years of talking about this stuff. Alison Kendall who has had a significant role in the Bike It! Walk It! events, working with students and other organizers and teaching bike safety courses gave perhaps the strongest endorsement of the night. Several current samohi students were present and supported the development of bike lanes around the campus, including at least one representative from the Solar Alliance Club which has long been involved with environmental activism and promoting Bike It! day at Samohi.

The Santa Monica Daily Press also ran a follow up story last week, that includes a few quotes from myself (although I should note the detail regarding my quote on the D.C. center of the street bike lane is quoted as tightly spaced bollards, but in fact I was trying to say they were not tightly spaced).

Later in the week, I came across a doozy of a an article on this issue on the front page of the Santa Monica Observer (latest content not yet posted), running the headline “Social Engineering Samo’s Bike Friendly Future”, clearly intended to invoke some vague notion that bicycling is a form of government social control, while of course never questioning the role of government programs in shaping the status of quo of automobile centrism and dominance. 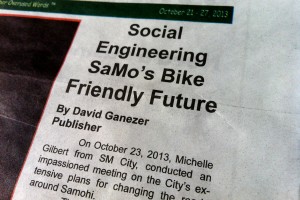 With that headline staring at me I couldn’t just walk past, and somewhat regrettably picked up a copy. Perhaps such a garbage paper ought best be ignored and promptly shuffled to the compost pile, but it is circulated to many public locations in the city and this story was especially aggravating. The “social engineering” framing of Ganezer, is in part picking up on one commenter that evening who used the term to describe the city’s goals to facilitate biking to campus.

I should note here that in my experience, “social engineering” is pretty much always a useless and ambiguous phrase, one of those vaguely scary buzz terms that invites the listener to imagine whatever their personal fears about “the government” are onto it.

When people invoke “social engineering” what is typically meant is they want to preserve their existing preferred social engineering. As in preserving the means by which government reinforces the lifestyle that they want to impose onto others. Car dominant culture and the consequences of it are very much imposed onto people whether they like it or not, or if they have the means to directly benefit from it or not.

I prefer to avoid the “social engineering” term at all as being unhelpful to any discourse, but if we are going to talk “social engineering”, how about we start with discussing the matter of eminent domain that destroyed a vast linear stretch of homes predominantly owned by people of color in the 60’s, for the sake of motoring convenience to and from Santa Monica. Or the vast subsidization that continues to mask the costs of driving, and undermine other modes of transportation, among other subtle and not so subtle ways our society, and the advocates for car orientation have leveraged the power of government force to push for cars. Any serious discussion of the role of government in shaping transportation outcomes cannot begin with assuming that where we are is some “neutral” state.

When municipal governments are today tepidly pivot away from pushing cars to supporting other modes of transportation, it is if anything an unraveling from a prior “social engineering experiment” of fostering a car orientated society that swung the pendulum too far. Where do we even draw the line on what is “social engineering” anyway? It is terribly ambiguous. What is public schooling itself if not a form of government supported “social engineering” on some level? Our system of government is hardly perfect, but it is also a reflection of priorities for those who elect it’s representatives, it is not some remotely detached “other”, we are all part of it, whether actively through engagement or by absence and disengagement.

I’m used to the shallow “social engineering” rhetoric, but one of the things that really irked me was Ganezer quoting Owen Gormon out of context, and blatently mischaracterizing his stance and advocacy work as a former student and graduate with Ganezer’s descriptive copy. He, like local Daily Press columnist Bill Bauer (who is also fond of describing anything the city does he doesn’t like as “social engineering” without questioning the “social engineering” for cars that he prefers and supports), frames bicycling only it’s capacity as a largely personal hobby interest (and implied as not legitimate daily transportation) of those who advocate for safer bicycling conditions, and that this being “pushed” onto others (again not questioning the way we “push” driving). Ganezer compares programs to encourage and facilitate bicycling to school, and Owen’s support of this, to having a Rabbi give sermons in class, as though programs like the student led effort to start Bike It! Day is equivalent to religious indoctrination and violating the separation of church and state.

Ganezer goes onto to citing the safety concerns that are put of this push by stating driving to campus being safer, with no acknowledgement how much more often youth are killed inside cars than outside of them, or that the culture of driving to the campus is what creates the hazards for biking and walking. Not skipping a beat, he concludes with a string of rants on development of which there has been little around the campus in may years and is largely unrelated to the specific immediate problem in the scope area of school drop off craziness. He complains that city employees pensions are too high, claims that one of the traffic engineer consultants specializing in bike facilities got a degree in “social engineering” at US Davis, and closes on an erroneous statement that perhaps the best fix is to close the airport and relocate the entire high school there.

Writers like Ganezer and Bauer employ sarcasm, but at times they blur the lines on what is fact, opinion and joke. Opinions are one thing, but when the basic facts of any given issue of discussion are purposely distorted, where they grossly misrepresent the views of other members of the community, I consider such writers, bolstered by the perceived authority that comes with being in a circulated newspaper, to be irresponsible contributors to the public discourse. If they had a strong case to support their opinions, they shouldn’t have to pad their arguments with unsubstantiated “truthiness”, ambiguous scare words or taking those with whom they disagree out of context.

The push for bicycling improvements, and various aspects of this movement and those citizens and representatives of the city involved, are not above reproach and criticism. However I long for honest critics with something genuinely interesting or constructive to bring to the table say without resorting to a facts optional approach to padding their status quo agenda, or the predictable grab bag of purposefully ambiguous and vague reactionary scare words.