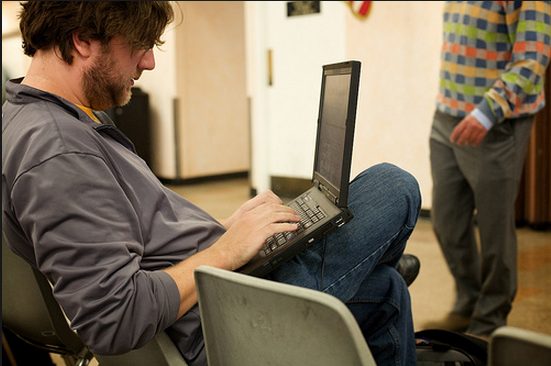 Any discussion of how to get millennials more involved in civic decision making has to recognize one simple fact. The current generation of twenty somethings (and some early thirty somethings) is the first generation to grow up surrounded by digital technology. Even at the crusty age of 36, I can remember handing in school reports in fourth and fifth grade that were entirely handwritten. Erasable pens were as high tech as things got for me in grade school.

I went to an elite East Coast Boarding School, the kind that you see in movies where boys in sweaters play football on the lawn. My senior year of high school, 1995, I was one of two people who had an email account. The other person? Donald Trump Jr.

The next year, the entire school had one. Two years later, just about everyone had one.

The change happened that fast.

With the many, many, ways that people can communicate these days, why are we still offering such limited ways to get their voices heard?

In recent years, we have seen some strides regionally in making meetings and decision makers more accessible via the Internet beyond just putting meeting notices and agendas online.

Metro occasionally streams meetings and presentations live online via US Stream or Live Stream. Santa Monica is way ahead of Metro. Many of their meetings are available on television. Metro also took the lead in holding “online chats” with the Metro Board Chair in 2008 and 2009 at the Chair’s insistence. That Board Chair was Pam O’Connor, known locally in Santa Monica as “the mayor.”

But of course, that is still one-way communication. How can cities encourage people to be more involved?

However, Los Angeles was on the right track. Mike Bonin, the Chair of the Transportation Committee, realizes that expecting Angelenos to take off work to travel to Downtown Los Angeles for two minutes of testimony in what could be a several hour long meeting is ridiculous. Heck, just writing about the process created a run-on sentence.

But digital testimony is only one piece of the puzzle. Decision makers should use their social media outlets to garner feedback on proposed legislation and plans as should city staff through officially branded city accounts. Sadly, the City of Santa Monica lags a little when it comes to embracing social media. The Big Blue Bus (@smbigbluebus) has a scant 239 followers. The aforementioned mayor who embraced online chats hasn’t updated her twitter account since February of 2011 (@pamoconnor2010).

But Twitter is the first step. In a decade, I see a future where registered voters will be able to login to a city website and easily comment on any issue facing the city and be beamed directly to the appropriate decision makers.