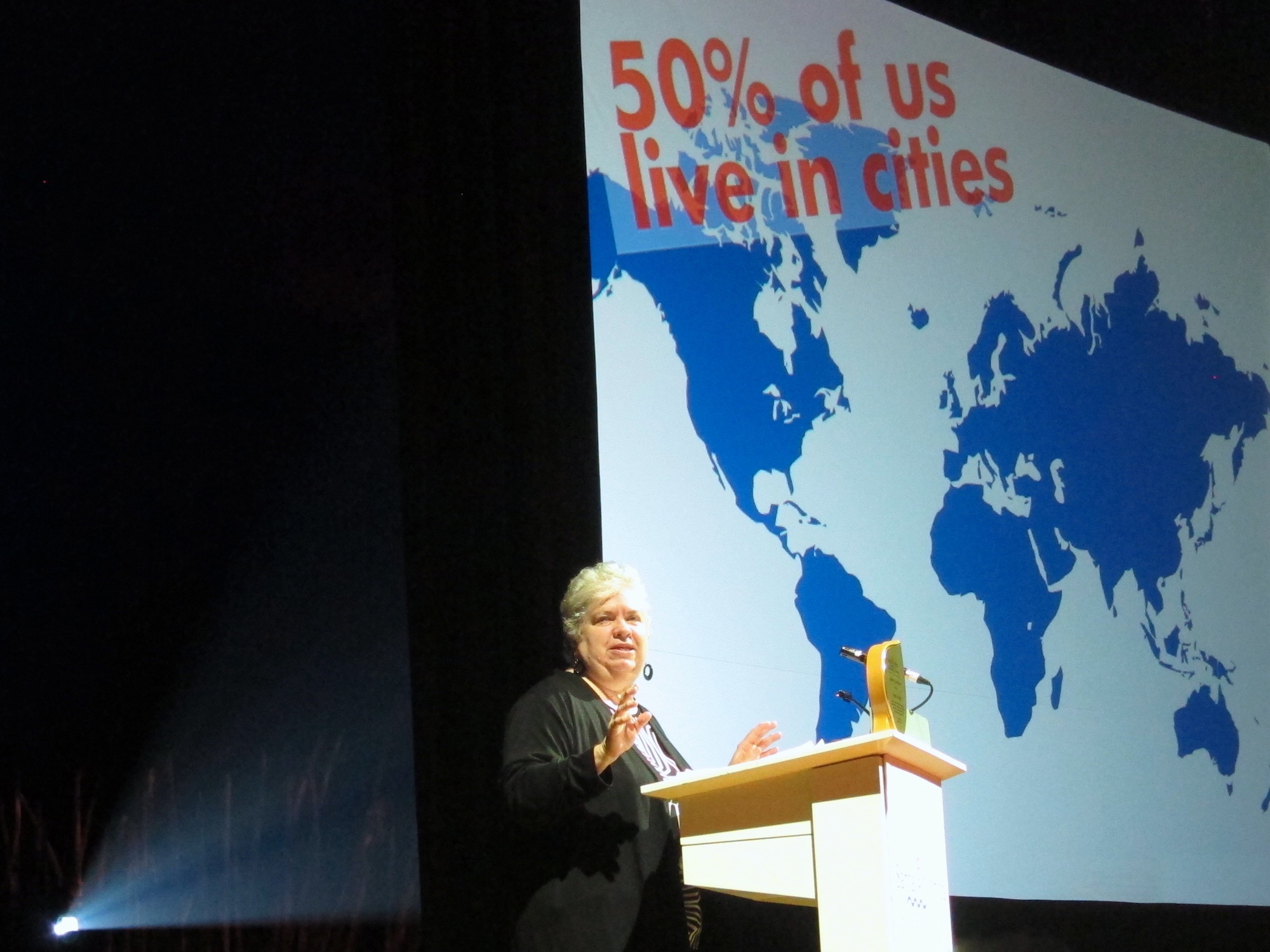 Just three years ago the annual Santa Monica event had a more somber tone as officials grappled with a major recession and budget cuts. But this year’s get-together, held inside the Cirque’s Grand Chapiteau, was decidedly more buoyant.

The theme of this year’s Cirque du Soleil Totem show is evolution. Those who gathered for the State of the City event under the Cirque tent were also focused on evolution, or how the city will move forward in the 21st century.

But before hearing the lineup of speakers address those weighty matters, the few hundred people in attendance first networked and noshed on fruit and pastries while being entertained by strolling Cirque acrobats on stilts.

Then they moved inside the tent’s performance area where former Santa Monica mayor Nat Trivis introduced the more formal portion of the show while wearing a festive hat more appropriate for a Mardi Gras party.

For her part, Mayor Pam O’Connor began her cheery address by expressing the wish that she could have descended onto the stage via a circus trapeze.

Well, you get the picture.

This wasn’t a case of irrational joy. There was much positive news to report.

Mayor O’Connor made repeated reference to a recent McKinsey & Company report on what local governments need to do to become great cities. And then she listed the many ways that Santa Monica was already doing them, such as being advocates for the environment.

Business is booming, O’Connor pointed out, with more than $90 million generated in annual sales tax. The city is edging closer to its goal of being water self-sufficient. City Net, the city’s fiber optic network, grew by 125 percent last year.

Los Angeles County Supervisor Zev Yaroslavsky, on hand to accept the Community Excellence Award, pointed out that the Expo Line light rail to Santa Monica is progressing “considerably under budget.” It might also be finished as early as the end of 2015, putting it ahead of schedule, a rare feat for such a high-profile public project. Yaroslavsky praised O’Connor and the Santa Monica community for helping to secure the necessary funding to make the Expo line a reality.

With the sand and ocean only a few steps outside the tent, many speakers made note of the city’s rich natural resources that continually attract people to live and work here.

“The same city in some other part of the county would not have all of the assets that you have,” Yaroslavsky told the crowd. “You have exploited in the best sense of the word your location. You recognize that the environmental resources that Santa Monica has are also its primary economic resources.”

Brad Cox, chairman of the Santa Monica Chamber of Commerce, echoed those thoughts in an interview after the event.

“We always use the term ‘Live, work and play.’ That’s what makes Santa Monica such an attractive place,” Cox said. “It creates not only opportunities for us, but it creates challenges and issues.”

One of the biggest challenges, he said, was the need to create more housing in the city. There are 47,000 residential units in the city, he said, but more than twice that number of people who work here.

“I’m an optimist,” Cox said, a view that seemed to sum up the mood of the entire event. “We can always reflect on the things we’ve learned in the past and move forward. But I don’t want to wallow in the past. That’s something that doesn’t work for me. It just makes life miserable.”