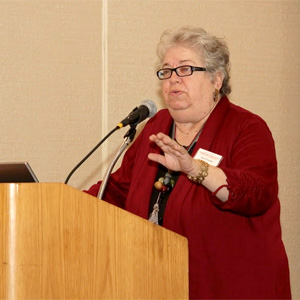 Recognizing her role both as a local and regional leader on environmental and transportation issues, Streetsblog Los Angeles awarded Pam O’Connor the “Politician of the Year” Streetsie Award for 2013. Southern California Streets Initiative Board Chair Juan Matute* on Streetsblog announcing the award:

She has served on the Santa Monica City Council for 20 years, the Metro Board of Directors for 13 years, and the Chair of the Expo Line Construction Authority. She served as President of the Southern California Association of Governments, leading the unanimous adoption of the region’s Sustainable Communities Strategy, a regional framework for transportation and land use sustainability.  She’s also on the board of ICLEI (Local Governments for Sustainability), a non-profit group looking to provide technical expertise and services to local governments looking to lead the transition to more sustainable places.

What’s truly remarkable about Pam is that none of these elected or appointed positions are full-time, as is the case with L.A. City Councilmembers.  Pam serves in her free time from her primary job as a historical preservation consultant.

Pam describes herself as “car-light” as we have proof that she’s an active Streetsblog L.A. reader and follows our social media.

The Streetsie win by O’Connor was big news. For the first time ever, a newspaper covered the Streetsies. At the Santa Monica Lookout, Jason Islas writes:

O’Connor beat out Los Angeles City Councilmembers Mike Bonin and Jose Huizar and State Assemblymember Mike Gatto for a “Streetsie” — the annual honor Streetsblog metes out to those who have made the greatest impact in pedestrian, bicycling and public transit issues — in the “elected official of the year” category.