Instead of discussing and voting on the controversial Bergamot Transit Village at its meeting last night, the Santa Monica City Council elected to listen to close to 125 community members speak for two minutes each early into Wednesday morning. City staff and representatives from the project applicants, design firm Gensler and developer Hines, also presented the details of the project and provided a quick rebuttal to critics early this morning. 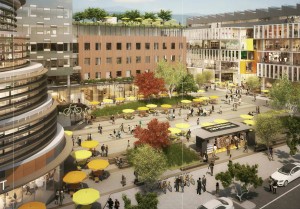 The Council will revisit the project at a special meeting next Tuesday, February 4 at 6:30 p.m., taking community comments at this week’s meeting into account. Speakers represented a variety of community groups or spoke for themselves, many were longtime residents and homeowners in Santa Monica. Community member comments throughout the night spanned the spectrum, though opponents of the project outnumbered supporters approximately two to one.

Currently, the site is home to a large former industrial building and a surface parking lot. The project would break up the site with two new north-south streets, two new north-south pedestrian paths, one continuation of an east-west street, two new signalized intersections and a new sidewalk on Olympic Blvd. More information about the specifics and the history of the project were included in a post published last week on Santa Monica Next.

Most opponents cited increased traffic congestion and the size of the project as the primary reason for their dissent, though many also took issue with the amount of affordable housing and the balance of office and residential space. Some also questioned the accuracy of the Environmental Impact Report and accused council members, Mayor Pam O’Connor in particular, of accepting campaign contributions from the developer.

During his rebuttal at the end, Hines Managing Director Doug Metzler summed up what he called 90 percent of the opposition: “Traffic is terrible. For the love of god please don’t make it worse.” He went on to explain that the project should be built because with the aggressive transportation demand management tools it offers (including outbound PM trip caps), the city will be better equipped to deal with future traffic than if nothing is built—and traffic will get worse either way.

Supporters celebrated the project as a gateway to the city and a compliment to the adjacent Bergamot Expo Line Station. They cited it as a good example for future transit-oriented development (TOD) in the city because of its focus on sustainability, open space, affordable housing, and its variety of transportation options. Many also supported the developer’s contribution to early childhood education.

A representative from Assemblymember Richard Bloom’s office delivered a letter of support to the council and underlined the influence of the discussion and deliberation around the scale and specifics of the Bergamot Transit Village. “This project is smaller, better designed, and less dense than the original project. This city’s approach to TOD will affect similar proposals throughout the region for years to come.”

However, many said that this particular envisioning of TOD is the wrong project, in the wrong place, at the wrong time. The density of the project, measured in terms of the square footage of building floor area to the area of the site (floor-area ratio or FAR), is set at 2.5 and the max building height is 75 feet (about 6 stories), though it can go as high as 86 feet if the building meets certain requirements. The scale of the project has already been downsized, but many fear it is still too big.

Former Santa Monica mayor, city councilmember and Move LA Executive Director Denny Zane said the Hines project is TOD overreach. “We lack a clear articulated definition of TOD. Is it unlimited density? We should densify around transit—TOD has regional benefits, but local conditions matter as well. If we want public support in the long run, we need to let the public know that that we understand the burdens local communities bear.”

The staff report’s economic analysis presented to the council identified $32,272,805 in community benefits at full buildout—from the 30 percent local hiring, to the six internships for Santa Monica residents, to the street and sidewalk improvements, to contributions to early childhood education, to developing an area that many called “blighted.” It is 15 percent of the recently passed Bergamot Area Plan, which articulates a vision for the area, and the only unoccupied property.

Despite apparent community benefits, Zane’s suggestion—as well as many other opponents—for the project is to replace more of the office space with residential space. Residential development certainly has less predictable car traffic patterns than office space, especially near a future Expo Line station. Councilmember Kevin McKeown reminded the council that commercial development per square foot generates more traffic than residential. “I would be more comfortable with this project if there was more residential space,” he said.

RailLA Board Member Jeremy Stutes, also a Santa Monica resident, saw Bergamot Transit Village’s office/housing/retail mix in a different light. He cited a study done at USC that found that residents living within a half mile of the Expo Line reduced daily miles driven by 40 percent and tripled their rail ridership after the first phase opened in 2012.

“RailLA supports Bergamot Transit Village as an example of the right way to boost rail ridership: by adding jobs, housing, and retail directly across the street from the Bergamot Station Expo Line stop with the most aggressive Transportation Demand Management program ever proposed in Santa Monica.”

Stutes—echoed by many other younger speakers—said they are part of a new generation of Santa Monicans who don’t want to depend on their cars to get around everywhere. They support the variety of transportation options available in the village, including safe bike parking and riding, and look forward to visiting the bars and restaurants.

Still, opponent after opponent, neighborhood association representative after Santa Monican for Renter’s Rights rep, after Santa Monica Coalition for a Livable City member, said traffic is their primary concern. One woman asked how councilmembers could live with the guilt if the gridlock created by this project prevented the paramedics from saving someone’s life. Another suggested Hines executives and councilmembers who vote yes should have to wear an ankle monitor and be required to sit in the traffic that the project will create along with everyone else. Another opponent showed a video of crawling eastbound traffic on the 10 freeway during the evening rush hour and told the council that the city is now paying for its past development mistakes. One compared the project to the Titanic and said the area is “drowning in car trips.” Another said her friends in the rest of the city suffer from “Westside Aversion Syndrome” and refuse to drive into Santa Monica.

The developer and city staff say the transportation demand management program is aggressive and enough to mitigate increased trips. Hines proposes significant financial penalties for trips that exceed the evening trip cap in the Environmental Impact Report (EIR) so it is supportive of the city’s long-term goal of no net new evening peak trips by 2030. The project also proposes transit pass subsidies for residents, a parking cash-out program for employees, as well as a vanpool, bike share, and variable parking fees.

Indeed, many supporters cited the project’s sustainability features as their reason for support. The buildings will be LEED Gold. There are stringent water and energy performance standards. The project must produce at least 11 percent of its energy needs onside and be net zero energy in line with the city’s goal by 2030. The “environmentally superior alternative” identified in the EIR would be 73 percent commercial and 27 percent residential—which is not in line with the city’s vision for the project.

Supporters and opponents said the project includes either not enough or enough affordable housing. Out of 473 residential units, 24 are reserved for extremely low income and 66 are affordable/workforce housing. The Bergamot Area Plan approved by the City Council last year calls for 30 percent affordable housing—the transit village only has 20. However, it has more extremely low income and handicap accessible units.

A resident who works with the Weingart Center for the Homeless said the center helps place people into housing around L.A. and they never see as many as 24 extremely low income and accessible units in one place.

Others questioned the affordability of the units. The affordability of the units is calculated as a percentage of the area median income (AMI). Some rents for studio and one-bedroom apartments could be up to 150 percent AMI, while rents for two- and three-bedroom places could be up to 180 percent AMI. Some would be extremely low, at 30% AMI, and some moderate at 110% AMI. Median income estimated at the development will be $60 to $70,000 annually.

Another vocal contingent of residents requested that O’Conner recuse herself from voting on the project for ethical reasons because of campaign contributions she received from Hines–$4,300 in campaign debt from her 2006 re-election campaign. Although the Los Angeles County Metropolitan Transportation Authority, of which she is on the board of directors, has rules against receiving contributions from businesses seeking contracts, the City of Santa Monica has no such rule.

O’Connor clarified with the city attorney that the contributions to her campaign were legal and that L.A. Metro rules don’t apply to Santa Monica before saying, “The contributions were legal. Santa Monica citizens voted on this and we don’t have a law against voting for something once we’ve received contributions. There are no ethical or legal issues with this.”