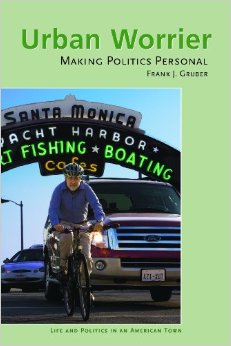 Why do I live in Santa Monica?

To be truthful, to go way back to the real why, it was an accident. In 1981 I was 29 and living in Venice when I met my future wife, who also lived in Venice. Two years later we were looking for a place to live together in. We found a cottage to rent across the border in Ocean Park. The rent was about the same as our combined rents in Venice, the place came with a big avocado tree in the backyard (which we shared with two other little houses, one occupied by the property owner), and the house had a pull-down staircase to access a snug extra room in the attic. (It also had a kitchen counter made from a rescued piece of bowling alley lane — that was cool.)

We moved in. Did we know we were moving into Santa Monica? I suppose so — we knew our address — but did we think about it? I doubt it. I guess that’s why I’m not surprised that few of the young people moving into Santa Monica today involve themselves in local politics. Back then Janet and I had a lot more on our minds than the zoning code. Like our careers, and questions like do we want to get married and have a family. Little things like that.

The answers to those to questions turned out to be yes, and by 1990 we’d bought a house on Marine Street, and we had a son, Henry, born on the last day of 1989. Nineteen-eighty-nine was a pivotal year in world history — the Berlin Wall coming down and all — and I have always liked that we have a personal connection to it.

And so it was fate, destiny, luck, avocado tree, whatever that washed me ashore in Santa Monica, but what has it meant to have been a Santa Monican for going on 31 years? Why am I so happy about that non-decision?

Fair warning, but it’s impossible to write about this without falling into the use of clichés, likes and loves that are so common that they are commonplace. So typical that they are “Typical!”

At the top of that list of banalities is community, but that overused word is also the essence of Santa Monica. Santa Monica is a small city with a tradition of grass roots politics and it’s small enough so that one and one’s neighbors can become involved and have an impact. That’s what happened to me when empowered by being a father (i.e., certified grown-up) I became involved.

Also on the list is progress, as in the word progressive. It’s not necessarily a popular sentiment among my generational colleagues, but Santa Monica has become a better place to live in the 30 years I’ve been here. There, I said it. A better place. So lightening, strike me dead.

Sure traffic is terrible, especially if you’re trying to leave the city late in the afternoon. That kicked in about 10 years ago (and the same phenomenon had hit our too few north-south streets (e.g., in Sunset Park) earlier), but traffic was never good even before this particular nightmare descended upon us. The worst traffic, though, used to be in the other direction — eastbound in the morning, westbound in the afternoon, so it mainly affected Santa Monica who commuted to jobs elsewhere. I worked in Century City and then on the Sunset Strip and later in Beverly Hills and I experienced the wrong side of that.

I solved my own commuting problem, and deducted one car from the eastbound morning commute, by moving my office to downtown Santa Monica in 1994. My life became a lot more convenient. Okay, you say that was easy for me (I’m self-employed now), and that’s no solution for the rest of us, but in effect a lot of others did the same thing. If you live in Santa Monica and have a job, commuting isn’t, on average, bad. Either you have one of the many jobs here (possibly too many), in which case you have a short commute within the city’s eight square miles (ride a bike! take the bus!), or if you work outside Santa Monica (like my wife who teaches at USC) you get the benefit of the changed traffic pattern. In any case, employed people who live in Santa Monica have considerably shorter average commutes than people in the rest of the region.

What has improved in Santa Monica? For one thing, downtown. The tired Santa Monica Mall became the vibrant Third Street Promenade (25 years ago — time for a commemoration?), bringing tourists back to Santa Monica, filling the City’s coffers with sales tax money, and sparking a boom in housing. Beyond that, before the Promenade you had to go to Westwood or the dumpy UA Theaters in Marina del Rey to see a first-run studio-released movie. Again, life became more convenient. (Unless you want to watch porn — how many people remember the Pussycat Theater on Second Street? You stay classy, Santa Monica.) (On the other hand — I miss the used bookstores. But then the whole world lost its bookstores to the Internet without getting a great downtown to walk around in and people-watch.)

Downtown Santa Monica has been very good to me. I’ve had offices in two historic buildings — first the Clock Tower Building and since 2003 the Central Tower Building on Fourth Street. More important, in 2003 my parents, then in their eighties, moved from Philadelphia to an apartment in one of the new apartment buildings that was built pursuant to zoning changes that were enacted in the ’90s. They could live downtown without a car, close to their doctors and a grocery store, and, since my mother died in 2007, it’s been essential for my dad to be living close to one of his children.

I could go on and on about all sorts of “urbanism” type issues, but what about the important stuff? What about what a fantastic place Santa Monica is to raise a child? Henry went K-12 in our public schools, played sports in our parks (we need more, but ever since we’ve lived here the City has been adding them and we have a huge opportunity at the airport to more than double the parks acreage we have), and had a posse of great friends.

Henry could walk to every school he went to, and it wasn’t too long before he and his pals could find their ways around town without being chauffeured by their parents. I remember when he and friends from the Samohi music program went on a European band trip with kids from all over Southern California — Henry and his friends couldn’t get over how clueless the suburban kids were about being on their own.)

I could go on and on . . . I could write a book about Santa Monica. Wait a minute . . . I have. And on that advertisement I’ll end thi