Home Uncategorized Op/Ed: On MANGo, Staff and the Council Need to Believe Their Own... 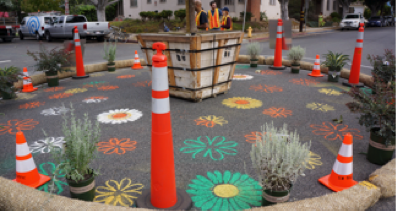 Let’s believe our own eyes

Know we’ve come to the end

All our patience is gone

To believe our own eyes

It might seem an odd way to begin a discussion of the Michigan Avenue Neighborhood Greenway (MANGo) with a quote from an old The Who song about a family that is nearly ready to give up on their special needs child. But, taken on their own this paragraph is the perfect message for a city staff and leadership clouded on one of the city’s most visible Livable Streets projects.

The city is facing a choice at the February 11 City Council meeting to move forward or not with this project. However, obscuring the issue and confusing the debate are two surveys done of residents in the Pico Neighborhood showing wildly different levels of support. One was done by a supporter of MANGo, one an opponent of many parts of the project. Each survey, and they both asked the same questions, and by “the same” I mean word for word identical, of a similar group of people, showed results that matched the opinion of the person conducting the poll.

However, the city itself did outreach through a series of public meetings, charettes and the innovative “Pop-Up MANGo” event. Thousands of notices went out about these events, and news stories appeared in every major Santa Monica publication. Feedback cards were distributed. On top of the two surveys, the city has it’s own data.

And with apologies to Pete Townshed, it’s time for the city to believe its own eyes.

In response to the high amount of cut-through traffic in the Pico Neighborhood. Over 4,200 cars a day cut through what is supposed to be a residential street because of the traffic. With schools lining the route, the city made reducing cut-through traffic and vehicle speed a priority. There is also no east-west bicycle infrastructure on either side for quite a bit. A cool 3/4 of a mile exists between bike lanes on Pearl Street and Broadway.

Thus, the MANGo project was born.

The city brought on a top notch consulting team including Meléndrez, & IBI Group and Community Arts Resources (CARS). Meléndrez is working on the MyFigueroa! project and CARS is run by some of the same people that run CicLAvia. This team works regularly in Santa Monica, and is widely respected by city staff and advocates.

The consulting team with the city then put on a series of public meetings and the Pop-Up-MANGo event. At Pop-Up MANGo, they literally placed temporary street treatments similar to what MANGo could look like. The event drew 400 people who signed in, but as with most events of this nature, attendance well-outpaced the sign-in sheet. When you consider the many people who passed through the area and took part in the event unwittingly, it’s not an exaggeration to say that thousands of people took part in Pop-Up MANGo in some way.

At all of these events, the city collected feedback forms, had a chance for verbal input and conducted question and answer sessions. Some of the feedback was supportive, some in opposition. But all of it was collected by parties without a personal stake in the outcome. It’s not as though the Melendrez team isn’t going to be paid if the project is called off.

Which isn’t to say that the outreach was perfect. Some members of the Pico Neighborhood Association argue they weren’t involved enough in the planning process. Others complain the forms weren’t always in Spanish, although there was some outreach completed only in Spanish.

Following the events, one resident and one co-chair of the Pico Neighborhood Association asked the city if it would help her conduct a survey. The survey itself is innocuous enough, but the results showed a community firmly opposed to losing car parking in the name of remaking Michigan Avenue. Unsurprisingly, the resident who completed the surveys was a vocal critic of the project.

At the same time, a second resident went door-to-door with literally the same survey and (surprise, surprise) came away with completely different results. Needless to say, this second surveyor is adamantly support ing the project including the most radical idea, using diverters to direct through traffic on to other streets.

It should be noted that this second resident, Barbara Filet *** is a longtime resident of the Pico Neighborhood. Despite the projects important regional significance Filet has been pushing for investments and safety improvements in the Pico Neighborhood since the 1990’s.

When I set out to write this story, I reached out to pollsters and sociologists to ask about how who gives a survey can impact the outcome. However, as I worked through the story, I thought this point is probably so obvious I don’t really need to speak with professors at USC, LMU, or professional pollsters. Heck, even the second surveyor told me her neighbor is a professor who specializes in public opinion and she believes both surveys are useless.

I can go on and on about the value of road diets for safety, air quality, road access and public health. Road design is an important part of encouraging students to walk and bicycle to school, a habit that creates healthier lifestyles for decades. All this is true.

But I’ve learned that all the idealism in the world won’t persuade a political leader to buck his or her constituents over something such as road design. As rumors swirl that staff and some leaders are concerned about the survey data that’s been presented, I appeal not to their idealism…but to their pragmatism.

It doesn’t take a polling expert to say those survey results aren’t worth the paper their printed on. You have all the data you need through your own collection process.

MANGo has a lot of potential to be a regionally important project as well as a locally important one. If the city agrees to make meaningful reductions in auto-traffic a goal for the street while increasing access and safety for other users; it can be the kind of project that Santa Monica can hold up to all of Southern California. The project can provide safe access to schools, the beach, and the larger city; something the Pico Neighborhood doesn’t really have for any except car driver.

Or, the city can add a bunch of trees, call it a greenway, and call it a day.

There are people that want to see that second result. But at Pop-Up MANGo, diverters were supported by over 55% of participants that filled out respondent cards.

It’s time to forget about the surveys.

It’s time to believe your own eyes.

*** – Full disclosure, Barbara Filet is a member of the Board of Advisors for Santa Monica Next.